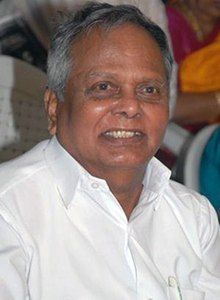 Steeped in rusticity, entrenched firmly in his roots, all his films ensured the voice of the villages and its folks were heard and reveled in by the audiences. Many of his films were not only commercial and critical successes but even attained the hallmark of cult classics being subjects of academic research.

Born on December 15, 1936, his beginnings with the film industry were as humble as his roots. Starting as a floor and spot boy at Navajyothi Studios, the young man, who had the resilience and vision to strike it big, soon graduated to become an assistant for director Shanker Singh. He was also a junior actor and assistant to B Vittalacharya and became his protégé.

His film Mayor Muthanna (1969) which was a stupendous success and thereafter there was no looking back. His Bangarada Manushya (1972) and Bhootayyana Maga Ayyu (1974) became a rage among the Kannada audiences. He was hailed as one of the most prominent directors matching the stature of the then reigning names like Puttanna Kanagal.

Besides the thespian Dr Rajkumar who he cast in subsequent films like Baalu Belagithu (1970), Namma Samsara (1971), Thayi Devaru (1971) Siddalingaiah also work with other actors such as Vishnuvardhan, Anant Nag, Lokesh and Srinivasa Murthy as well.

In fact, Bangaarada Manushya was such a phenomenal superhit that it held the record of running in a theatre in Bangalore for nearly two years.

As a director he was indeed a cut above others for the mélange of different subjects he chose. With the versatility of a visionary director brought to screen several socially relevant themes such as Kannadiga searching for his identity in Bengaluru in Mayor Muttanna, an educated man searching for his roots in a village in Bangarada Manushya, to feuding rivals who ruin one another in long drawn court battle in Bhootayyana Maga Ayyu. Besides Kannada films, he also went on to director a Tamil film Puthir in 1986 as a launch pad for his son S D Murali.

By late 80s, he had made way for younger generation of directors producing few films. However, the tragic and untimely death of his elder son in Chennai following a massive heart attack, left him a grieving father, with him soon bidding adieu to his film career. His son Atharvaa started his acting career in Baana Kaathadi in 2010,

Like many who chased the chimera of celluloid dreams and leaving home following parental objection he struggled, before comedian-director Dwarakish gave him the opportunity with Mayor Muthanna that launched his career. Siddalingaiah left his own indelible imprint in the annals of Kannada cinema. He was awarded the Puttanna Kanagal Award for his contribution to Kannada Cinema in 1993-94 as well as the Saroja Devi Award in 2010.