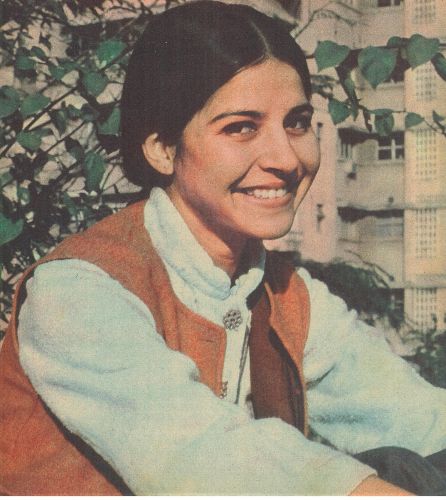 Bengali cinema doyen Mrinal Sen had remarked that it was surprising that an actress of her talent got recognition so late in her career... It is indeed remarkable that the then teenaged Suhasini Mulay who had won attention as the village girl who transforms the personality of the lead character in Sen’s path-breaking film Bhuvan Shome (1969), had to wait an unbelievable 30 years before she got the opportunity to show her immense talent again in Gulzar’s Hu Tu Tu (1999), which incidentally also fetched her the National Award for Best Supporting Actress. Becoming a much in demand actress, she has left her mark in strong and distinctive roles in films such as Lagaan (2001), Dil Chahta Hai (2001) and Humraaz (2002). She also featured on television in serials such as Puja Ka Ghar and Virasaat. An agriculture technology graduate from Montreal’s McGill University, she had begun her professional life as a documentary filmmaker, also winning four National Awards for her films.

Born on 20 November, 1950, she spent her early childhood in Patna, where she was brought up by her mother, after she lost her father when she was three. It was her mother, noted documentary filmmaker and film historian Vijaya Mulay, who sparked Suhasini’s interest in film. She appeared in an advertisement for Pears soap in 1965, thus catching the attention of noted filmmaker Mrinal Sen. He signed her on for Bhuvan Shome (1969) while she was still in school. The film went on to become a milestone in Indian cinema.

Faced with the prospect of pursuing a career as an actress in films, the idea of running around trees did not appeal to her. Instead, she decided to move to Canada to study Agriculture. After two years, realizing that the knowledge she was acquiring would never be implemented in India, she switched over to Montreal University for a course in Mass Communications. On completing the course, she returned to India and joined Doordarshan. After a short stint at the national network, followed by another at FTII, Pune, she quit, disenchanted by the manner of functioning.

During the same time, the fifth International Film Festival took place in New Delhi, at which she worked as an assistant. The renowned Satyajit Ray, who was Chairman of the Jury, liked her work and offered her a job as his personal assistant for his forthcoming film Jana Aranya (1975). The shift to Calcutta required considerable learning as the techniques involved were primitive compared to those she had learnt in Canada. She then went on to assist Mrinal Sen with his film Mrigayaa (1976). Working with the two greats – Ray and Sen, she returned to Delhi, and decided to take the plunge into documentary filmmaking. Actively producing films, she made over 60 documentaries, winning National Awards for four of her works.

Her return to acting happened serendipitously. Mulay was part of an organisation called Pakistan-India People’s Forum for Peace and Democracy. The mission of the organisation was to have the peoples of the two countries interact with each other, irrespective of the respective governments’ stands. She contacted Gulzar to attend an upcoming conference in Peshawar, and recite some of his nazms. While the filmmaker expressed his inability to attend due to shooting commitments, he also requested Mulay to send across her photographs. A few days later she was signed on for his Hu Tu Tu, which dealt with power corruption. It opened the window to acting for her, and she grabbed the opportunity with both hands. By her own admission, while documentary filmmaking was the epitome of creativity, it did not fetch monetary returns like acting could.

Shifting to Mumbai, the airing of the promos of Hu Tu Tu saw director Ashutosh Gowariker zeroing in on her to play the mother of Aamir Khan’s character in Lagaan. While she was still working on the film, she was offered the comedy serial Life Nahin Hai Laddoo. It was followed by the Farhan Akhtar directorial Dil Chahta Hai (2001), and another TV serial, Virasat, in which she played a stepmother with a difference.

Among the honours she has won, are four National Awards for her documentary films, namely An Indian Story based on the Bhagalpur blindings, Bhopal Beyond Genocide on the Bhopal Gas Tragedy, Chithi which explores the topic of education, and Official Art Form based on painting. She won the National Award for Best Supporting Actress for her performance in Gulzar’s Hu Tu Tu, where she played Maltibai Barve in the film, who transforms from a schoolteacher to a chief minister.

On the personal front, Mulay made waves when she married particle physicist Atul Gurtu at the age of 59, breaking unwritten societal norms. They had connected on Facebook, and married within one and a half months of meeting each other on January 16, 2011.