After the rebellion of 1857, every uprising, large or small was swiftly crushed by the British. The freedom movement was all but extinguished as no one dared to raise their heads.

These were times when most of India had come to accept that the British would rule for another 100 years.

The Rajahs had lost most of their legendary power and wealth and now only nominal rulers - in some cases mere tax collectors on behalf of the British.

The British, adopting a dual policy, protected the Rajahs' territories from each other, and administered law and order.

In exchange, they collected a tax...which was paid by every farmer in the country.

The submission of a portion of the farmer's harvested crop in the form of agricultural tax to the ruler was known as LAGAAN.

Like thousands of villages across the country, the farmers of Champaner depend on agriculture as the main source of livelihood. Hard working and fun loving they have small dreams - rain for their crops and food for their families.

On the outskirts of the village stands a British cantonment, commanded by Captain Russel (Paul Blackthorne) - an arrogant and capricious man, who wields the power of life and death over the village under his jurisdiction.

Last year, there was rain, but very little. And this year, two months of the monsoon season have gone by...no rain yet.

All eyes are skywards as they wait tensely for the life giving drops from the heavens. They know that if the monsoon Gods evade them again this year, their children will starve.

And then - a bolt from the blue. The Rajah's emissaries thunder through the province announcing double tax.

LAGAAN - a story of battle without bloodshed.

Fought by a group of unlikely heroes led by Bhuvan (Aamir Khan), an enigmatic young farmer with courage born of conviction - and a dream in his heart. Helped by Elizabeth (Rachel Shelley), the beautiful English girl, who came to India and lost her heart, and Bhuvan's pillar of strength Gauri (Gracy Singh), the young and perky village girl, who dreams only of a home with the man she loves.

A story of extraordinary circumstances thrust upon ordinary people.

Adversity faces with fortitude and injustice with indignity. There is a slowly awakening pride, the grit and determination of a people who have everything to lose.

Faith and courage come face to face with arrogance and ruthlessness.

And the human spirit triumphs. 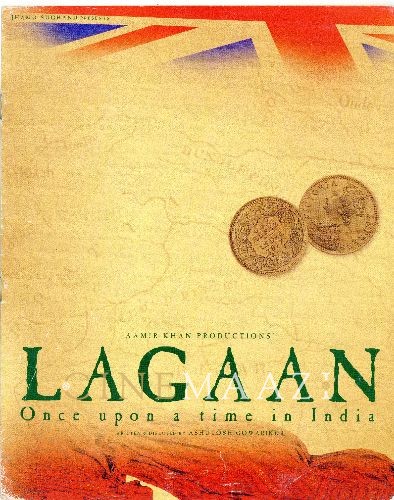