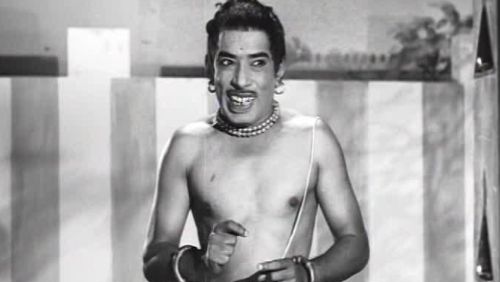 Like his Hindi counterpart, Johnny Walker, Kannada cinema’s Tiptur Ramaraju Narasimharaju’s comic timing was his forte. Known to most as Narasimharaju, his particular gift with comedy meant that he was hailed as the Hasya Chakravarti (King of Comedy) of Kannada cinema. With Charlie Chaplin as inspiration, Narasimharaju worked in as many as 250 films over his career.

Born to Ramaraju, a police constable from Tiptur and Venkatalakshmi Amma on July 24, 1923, in Tiptur, Narasimharaju made his stage debut at the age of four. His household was so impoverished that his uncle Lakshmipathiraju had taken the young boy to the Chandramouleshwara Drama Company run by C.B. Mallappa, which was touring Tiptur at the time. Narasimharaju was such a natural onstage that he soon received important roles like Prahlada, Lohithaswa, Krishna and Markanda among others. Having garnered some experience of the theatre, he left the company to create his own troupe, where he improved his earlier performances Gora-Kumbara and Harishchandra. Soon after, Narasimharaju joined the Edathorey Drama Company when his own troupe sustained some losses. For some time, he played female roles in mythologicals like Vishwamitra, Rama, Ravana and Bharata. Thus, for the first 27 years of his acting career, Narasimharaju remained in professional drama companies, including Hirannaiah Mitra Mandali, Bharatha Lalitha Kala Sangha, Gunda Joisara Company of Belur and Gubbi Channabasaveshwara Nataka Company. He remained as an active member in these drama companies even after he became hugely popular as a film actor. Although his earnings from theatre were meagre. His passion for acting kept bringing him back to it.

Narasimharaju made his film debut in 1954 with Bedara Kannappa alongside the star Dr. Rajkumar. He played the son of the temple priest. Narasimharaju and Dr. Rajkumar were erstwhile colleagues from Gubbi Veeranna’s drama company. His magnetic comedic appeal was such that following his successful film appearances, most audiences might not have watched Kannada films with such enthusiasm in the 1960s if not for him. He was in extremely high demand, often regarded as the busiest actor in the Kannada film industry.

He invested his money carefully, becoming the first Kannada actor to have a home in Madras. He was proud of his Kanndiga identity, as a result of which he did not venture beyond Kannada cinema much. He had terrific chemistry with Rajkumar and Balakrishna. An admirer of Amitabh Bachchan he had the opportunity to play with him in a charity match at Kanteerava Stadium. Narasimharaju was the opening batsman while Bachchan was the bowler. Unfortunately Narasimharaju was bowled in the first ball.

He remained active through the late 1970s as well. Narasimharaju passed away in Bangalore on 11 July 1979. An annual cine award, Narasimharaju Prahasti was announced in his honour after his passing away.