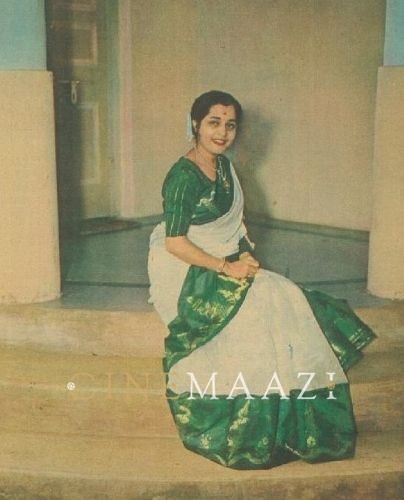 Usha Kiron was born on 22 April 1929 to a Maharashtrian Brahmin family. She was the second of five siblings. She was trained in Kathak as a child and was encouraged to participate in theatre productions by her father. While performing in M.G. Rangnekar’s Marathi play “Aashirwad”, the talented youngster was spotted by Uday Shankar. Uday Shankar was looking for new talents to feature in his next project, and he immediately cast her in his film Kalpana (1948).

While Usha gained limited recognition for Kalpana, she continued to appear in small roles for a while. According to one of her interviews, she ran into trouble with Uday Shankar on the sets of the film when she refused to obey his instructions regarding her costume for a particular sequence. Young and sulky, she was rebuked by him for hanging around the sets with a perpetually mournul expression. When he asked her if she did not know how to smile, she retorted, "No, you teach me how to smile!". This proved to be the last straw, and the reputed dancer-director removed her from the sets.

Though Usha Kiron's father held ambitions that she would become a successful film actor, she was held back by her family’s financial dependence on her. She appeared in the Marathi film Seeta Swayamvar (1948), credited as Usha Marathe. She continued to do some small roles in Hindi, Marathi and Gujarati films, but her breakout role came a few years later, with Amiya Chakraborty’s Gauna (1950), in which she played the lead. Despite the film’s failure, her talent shone through.

Significantly, Usha Kiron attributes her success to her initial failures. It is these failed films that led her to the lead roles in Gujarati and Marathi cinema while receiving offers for some Hindi films as well. Eventually, she was in such high demand that she was working double shifts, uncommon for actresses at the time.

Unfortunately, with Usha's success also came a great deal of emotional turmoil. She fell in love with her mentor Amiya Chakraborty, a married man. However, after a meeting with his wife, she decided to get married to her acquaintance Dr. Manohar Kher. The two were married in 1954. A supportive husband, Dr. Manohar Kher stood by her side throughout her film career. They had two children, Adwait and Tanvi. She took some time off after her daughter’s birth only to make a comeback after a few years with Hrishikesh Mukherjee’s Bawarchi. After her marriage, she made a clear distinction between her personal and professional life as focusing on her family was equally important to her.

Usha also had a humble personality despite her long and prominent career in films. In the early days of her career, she attended a theatre conference in Dubrovnik, Yugoslavia.  The organisers and delegates wanted to honour her with the crown of Beauty Queen, which she respectfully refused. Sadly, she believed that she didn’t deserve the title. In her illustrious career she played many strong female characters.

On 9 March, 2000 Usha Kiron passed away after a protracted battle with cancer in Nasik. In her long career, she acted alongside many other major Hindi film actors such as Ashok Kumar, Dev Anand, Dilip Kumar, Raj Kapoor and Dharmendra . Her immense contribution to Hindi, Marathi and Gujarati cinema will always be cherished.