Raj: "Vasanti came like a spring into my life and filled my lap with the blossoms of her love songs. I tried to press those blossoms to my bosom; but the sharp thorns pierced my heart and left it bleeding. Vasanti went away, but before she left my world, she tied me up in a bond with Geeta. After some time Geeta too, went away from me, from this world: leaving a memento of her with me. My son cried out for his mother. I searched around frantically for a mother for him, but forgive me, the pain being beyond endurance, I am unable to say anymore.

Vasanti: I cannot possibly recount all that my elder sister Geeta had done for me. It was my indebtedness to her that prompted me to wed her to Raj, when I came to know that she loved Raj as much as I did. Geeta was totally unaware that I had made a sacrifice for her sake. Subsequently when I became a suspect in her eyes as the one who was trying to snatch her happiness away from her, I left home and went away. My life thereafter became stormy and it was while I was being buffeted by the storm that I continued to smile, continued to try to live. Ultimately, I made a decision, a last decision. Only you can decide whether my decision was justified or not.

Geeta: Vasanti was my younger sister, as dear to me as the pupils of my eyes. I invested her life with every happiness that I could. In return, she made a supreme sacrifice for me. She united me in wedlock with Raj, who already had become her heart throb. Quite unaware of her sacrifice, I began to suspect her. Wasn’t this a great crime on my part? How could I atone for it? But then one day my dilemma was suddenly over; not the dilemma of my heart, only the struggle of my soul.

Shyam: I promised marriage to Vasanti; but she narrated all the complications of her pain-ridden life and declined my proposal. After that I left that very office in which I was manager and she was a typist. A long time elapsed and then fate once again brought her before me – at a wedding as my bride!

Murli: it is said that you can tell a thousand lies to build up a single wedding; but I told only one lie and married just once. Thereafter, however, telling lies became my life’s mission and yes, I am telling you the truth. It was I who got Raj his job, it was I who took him to Vasanti’s house and ultimately it was I who brought about the end of the story. To believe me see “NAZRANA” 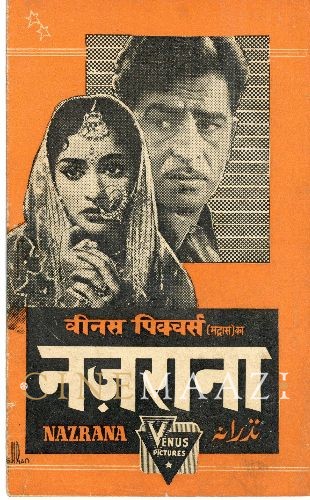