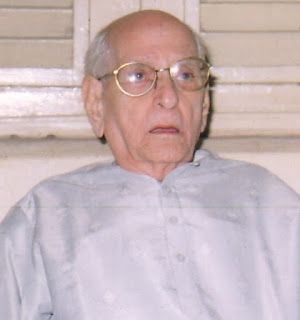 Pandit Feroze Dastoor. Image Courtesy: Beete Hue Din
English  |   हिंदी
It would be wholly justified to say that the Parsi community has contributed significantly towards strengthening the foundation of the Hindi cinema. The list includes reputed personalities like Producer-Director of the first talkie film Alamara (1931) and the owner of Imperial Movietone-Mumbai Ardeshir Irani, J.B.H.Wadia and his younger brother Homi Wadia of Wadia Movietone-Mumbai, Sohrab Modi of Minerva Movietone - Mumbai, J.J.Madan of Madan  Theatres – Kolkata, Music directors like Ferozeshah M.Mistry, B.Irani, and Khursheed Homji alias Saraswati Devi and many-many more. Pandit Feroze Dastoor was one such name, he was essentially a singer, and it was due to his melodious singing that he got a chance to appear in front of the camera. He did many films as a Singer-Actor during the ’30s and ’40s and then bid adieu to acting and fully immersed himself in Indian Classical Singing.

"And just like that, without any planning", said Pandit Feroze Dastoor, "I became an actor."

When I met Pandit Feroze Dastoor at his 2nd-floor residence of Dubash Building situated in one of Mumbai's timeworn areas, Maulana Shaukat Ali Road on Grant Road, we spoke at length on the various aspects of his life. Born on 30 September 1919 in Mumbai, Pandit Feroze Dastoor's father Bejan ji Hormas Ji Dastoor was a well-known Billiards player who had won the National Championship during his days. In the 20s, this same flat used to house Pandit Feroze Dastoor's father's Billiards Saloon. His father was an enthusiast of Indian Classical Music and could carry a tune very well.  Pandit Feroze Dastoor had received his initial training from his father who would invite any renowned singer to his house once every year for a music recital. A large portion of the audience used to be from the Parsi community itself and it was Pandit Feroze Dastoor who was always told to perform the opening act before the main event. It so happened that one such event was attended by the owner of Wadia Movietone J.B.H.Wadia who at that time was making his banner's first talkie film Laal-e-Yaman (1933). He liked Feroze's voice so much that he offered him a song in his film. And because the concept of playback had not been introduced yet, Feroze had to sing that song in front of the camera. The song was Jao sidharo fateh pao tum pe saaya rab ka, lyricized by Munshi Aashiq. The film's music was composed by Joseph David and Master Mohammad. J.B.H.Wadia was so pleased by Feroze's work that he not only asked him to record more songs, he also gave him a role in his movie. These songs from the movie Laal-e-Yaman (1933) were tasveer-e-gham bana hoon mai hairat me mubtila hoon, tori hardam parvar aas, mash-hoor the jahan me izzo-shaan waale, ab nahin dhaarat dheer jiyarwa and khaalik tori najariya najariya re tori. "And just like that, without any planning", said Pandit Feroze Dastoor, "I became an actor." He was just 15 years old at this time and had received 100 rupees as a remuneration for the movie Laal-e-Yaman (1933).

In the late 40s, Feroze bid farewell to films and immersed himself completely in musical exercitations. He received tutelage in Kirana-Gharana of classical singing by Pandit K.D.Javkar, Sawai Gandharva and Bal Krishna Buwa and very soon came to be recognized as a Khayaal & Thumri Singer of global caliber. His brothers and close relatives, all based in the U.S.A, wanted him to migrate there but the enduring bachelor Feroze refused to leave his roots. He remained a part of Surdas Sangeet Sammelan, Sur Singar Sansad, Tansen Sangeet Mahotsav & Sawai Gandharv Mahotsav till the rest of his days. He was honored by the Indian government's Sangeet Natak Academy Puraskar (1986), Madhya Pradesh government's Tansen Puraskar (1988), South Gujrat University-Surat's honorary Doctorate (1989) and Maharashtra Rajya Gaurav Puraskar (1990). In 1977 he sang a bandish Ghat Ghat me Raam Ramaiya in Raag Lalit for Shyam Benegal's film Bhoomika. He maintained a lifelong association with Mumbai University's Music Department. Today his disciples Sudha Divekar, Uttara Kelkar, Usha Deshpande, Achyut Abhyankar, Shrikant Deshpande, and Chandrashekhar Vaze have been keeping his musical tradition alive.

A zealous devotee of Lord Krishna, Pandit Feroze Dastoor passed away at the age of 89 years on 9 May 2008.  His last rites were carried out by his pupil and celebrated classical Singer Girish Sanjhgiri at south Mumbai's Chandanwadi crematorium as per Hindu rituals.