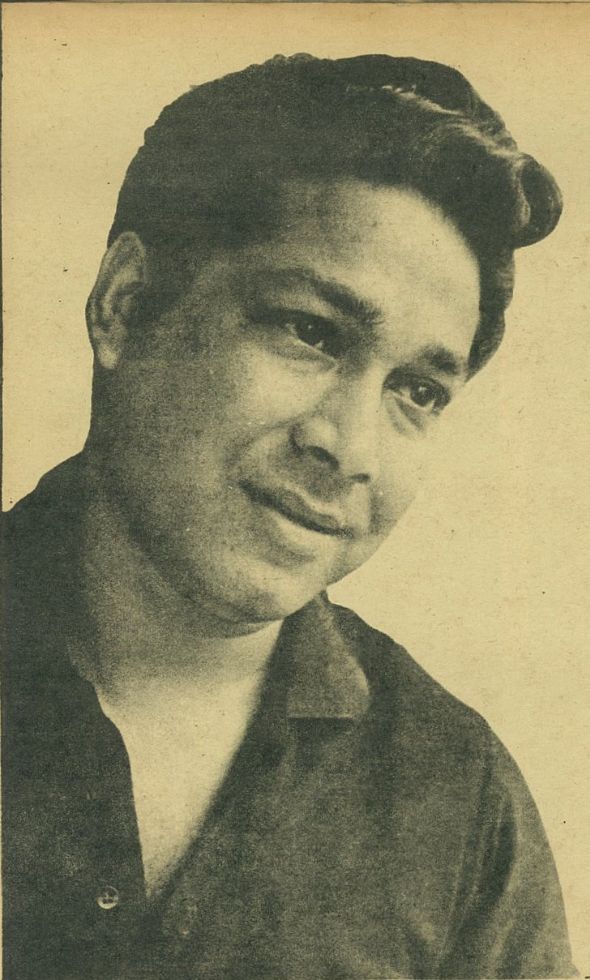 When Pratham Prem (First Love, 1965) was released in Bengal and the film went on to become a big hit, one young man suddenly shot to prominence. His name was Ajoy Biswas.

As a young lad, Ajoy was more interested in sports than films. He dreamt of glory on the sports fields and not on the widescreen. As a schoolboy, he was captain of his school team and captain of the all Calcutta Schools hockey team. And as he came of age he was promptly snapped up by Mohan Bagan for their power league in both football and hockey. His ambition of being a name on the sports field was on the way of becoming a reality. But he suddenly left Asutosh College due to political reasons.

How did he join films then?

"You won't believe this," he said and laughed, "but Rajen Tarafdar stopped me one day on the street just like that and said 'play the second lead in my Ganga (1960)' " Ajoy refused and said he'd rather join as assistant director. His wish was granted and he became the first assistant to  Rajen Tarafdar. While working in Ganga Ajoy came in contact with the editor of Ultorath (leading Bengali film journal). In turn, he wrote an article on-location shooting and sent it to the journal. It was published and for that Ajoy got Rs.25. "I was thrilled", he said. He then joined the magazine as a regular correspondent (Sachin Bhowmick was working there too) as well as doing the job of an assistant, director. That was in 1959.

Ajoy then joined director Asit Sen as his assistant director and worked in all the films of that director upto the Hindi version of Uttar Phalguni (1963), (Mamta (1966) in Hindi). It was by luck that he got his first directorial break.

In a chance meeting with N. K. Ghosh, one of the most famous film journalists of Calcutta, Ajoy narrated to him a story he had written, based on his own experience. N. K. Ghosh then took him to S. L. Jalan and again Ajoy narrated the story all over again. Jalan at once said yes and asked him to direct the movie and also offered him twenty-five per cent share of the gross. Ajoy was stunned at the generous offer and he promised Jalan that the latter would have no cause to regret his decision. Pratham Prem was the film and, success was at Ajoy's feet. And with fame came a flood of offers. He accepted two Shanti and Anand Mayttee but didn't do them because fate played a decisive hand in his career.

Ajoy left for Bombay for a special showing of Pratham Prem at the Ganesh Talkies. After the film show was over Subodh Mukherjee asked Ajoy to stay on and direct the Hindi version of the film. Ajoy was in two minds whether he should accept Subodh's offer or go back to Bengal where he had already tasted success.

"I deliberated for one whole night for I knew that my career and future depended on the answer I would give," Ajoy said. In the end Ajoy said yes to Subodh Mukherji, But what about his commitments to his producers in Bengal.


"As they had only signed me up and nothing was final I asked them to give me leave for a while. No, I don't think I did wrong," Ajoy said. In fact, the two producers encouraged him and one of them even refused to take the signing amount back. Ajoy stayed on in Bombay and began directing Sambandh (1969) (Hindi version of Pratham Prem). Sambandh was a low budget film that was a success all over India. And nothing succeeds like success. Today Ajoy has a number of pictures in hand.

Ajoy has very definite views on the director's role in films. "I believe", he said, "that the director of a movie should be the sole authority regarding everything." Ajoy believes that there are very few directors who can be called directors in the true sense of the term.

"I will never allow any stars to call the shots but I'll always listen to reason", he said and his face had that determined look. What if he has to direct big-name stars who insist on calling the shots?

"I would resign at once," he said, "and go back to writing." Money does not play the sole part in his plans so it would not at all be difficult to give up a lucrative job if his conscience rebelled against it. Ajoy says that a director's first job is to safeguard the interest of the producer. He does not believe in the star system and thinks that one day it will be routed out like a weed.

"People in the film industry," he said, i "care more about image".

Today Ajoy is known as the "rebel director". "I will do nothing I don't want to do" he says with fierce determination. He is or will be directing s N. C. Films Do Aankhen (1974), Gunaoh ki  Phool, Trilok Kapoor's next, Ram Mukerji Productions next, Mishra International's Bhoodan, Kishore Pictures Radha, Neeru Films Shraddhhu jab, Biswajit's Raktatilak (1974) and Jeevan Prabhat in Bengali. Ajoy, today stands on the threshold of success in Hindi films as well.

This article was originally published in Star & Style magazine's 13 November 1970 issue. Images used in the feature are taken from the original article and Cinemaazi archive