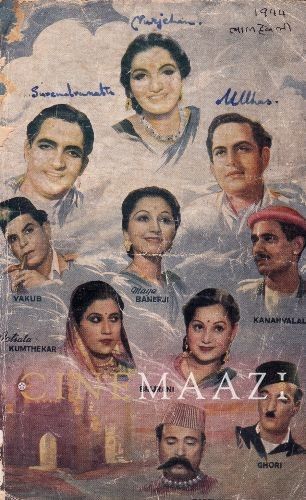 “Lal Haveli” is a bit of interesting moonshine woven round the ruins of a historical building in North India.

We are told that it was tenanted by one Thakur who had two daughters Lalkunwar and Mukta. The presents story opens with Lalkunwar’s elopement with a soldier hanging as a tragic legend over the Thakur’s family. The patrician Thakur is an upright man of orthodox virtues and gets enraged when he is reminded of the Lalkunwar episode. The story of this picture seems to be based on the theme of history repeating itself when youth meets youth and love is born between them.

Mukta, the second daughter of Thakur, looks affectionately at Anand, the son of a soldier, living in the neighbourhood. Through years, this affection grows and blossoms into deep love as Anand and Mukta reach youth.

In Mangloo, Anand has an inseparable friend, crude but worldly-wise.

Without the knowledge of the Thakur, Anand and Mukta take a vow to belong to each other till death.

In this romance is now introduced the eternal triangle when Jawahar, a city-bred Rajput gets attracted by Mukta through coincidental circumstances.

The Thakur likes the idea of Jawahar marrying Mukta, to perpetuate the Rajput tradition. But when Jawahar comes to the "Lal Haveli” he becomes a victim of Anand’s jealousy, being shot in the shoulder with a gun. As Jawahar lies hovering between life and death, Mukta’s blood transferred into him saves his lite.

The wedding arrangement between Jawahar and Mukta are proceeded with till, at the last minute, the local Brahmin Pandit stops the ceremony saying, that as the same blood runs in the veins of both, they cannot be married, having secured fraternal ties. The argument appeals to the old-fashioned Thakur and the idea of marriage is given up.

Jawahar’s disappointment makes him vindictive. But before this marital fiasco, Anand and Mangloo had become soldiers and we see an inconsequential interlude of war in which Anand becomes a hero and Mangloo proves himself a playboy.

When Anand and Mangloo return to their town, Mangloo brings with him a nurse as a souvenir of war service. Now we see the usual misunderstanding and mix-ups in which tempers rise and fall and suspicions are sprinkled about carelessly till Jawahar with a great-hearted generosity consider Mukta as his sister and hands her over to Anand as his mate of life.

There ends the story, without forgetting that Mangloo has for his MemSahib a regular war-time nurse.

As the story of this picture has been written by Chowdhary, it is, as usual, full of local characters, many of which do not contribute to the plot at all.

The picture, therefore, becomes dull at places and bright at times.

The production values are mediocre throughout. The direction is quite good in bits.

Some of the dialogues demand attention while the music can be called good throughout, considering the subject.

From the players, Yakub and Kanhaiyalal easily beat the others as Mangloo and Pandit.

Badriprasad, in the role of Thakur, does not have much scope and he looks subdued throughout.

Noor Jehan, in the role of Mukta, is not at all bad, looking silly and sensible at intervals.

Surendra as Anand is not much to write home about.

Ulhas in the role of Jawahar is as wooden as ever.

Vatsala Kumtekar, as the village vamps, insults the manhood of the audience.

In short, Lal Haveli (1944) continues to entertain throughout its length because the basic plot has some natural suspense in it.

It is not a propaganda picture, because Mangloo brings the war-nurse home as his sweetheart and thus defeats the purpose of the current advertisements: “Nurse Wanted”.

This review was originally published in Film India. The images used was not part of the original article and is taken from Cinemaazi archive