India is aptly described as a land rich in romance, chivalry, and historical importance.

While the beautiful Tajmahal at Agra, the sombre Kutubminar in Delhi, the magnificent Palace of Lakshmi Bai at Jhansi, and the majestic Budhist Temple at Bodh Gaya, are living testimony to the past grandeur and glory of India, there are other places equally interesting which still remain unexplored. Lal Haveli is one of those historical buildings which was presented to a remote ancestor of the present owner, Thakur, by the emperor Humayun in grateful appreciation of his invaluable help in the battle of Chitor.

The dilapidated Lal Haveli still stands in all its neglected splendour, and the impoverished Thakur makes much of his proud possession. To Thakur, Lal Haveli is synonymous with the nobility and honour of the house; and no wonder he jealously guards it against pollution. Thakur, however, can scarcely forget the infamy that has been brought upon the house by the elopement of his very beautiful sister, Lalkunwar, with a common soldier. It is thus found that Lal Haveli, too, has had its shares of romance.

Thakur's greatest attraction and responsibility in life centres round his beloved little daughter Mukta who is very friendly with one Anand living next door. This young boy Anand is also very proud of his late father and his soldierly achievements. The old gun belonging to his father is nothing less to the little boy than what Lal Haveli is to Thakur. Both Anand and Mukta have partially heard the story about Lalkunwar from the village-priest, better known as Panditji.

With growing years Anand and Mukta develop love for each other, so much so, that they become inseparable companions, if not ardent lovers. Thakur views this intimacy with disfavour and forbids Anand's entry even into Lal Haveli.

The two lovers however go on with their surreptitious meetings. These come to an end when one day Mukta is asked by her father to proceed to the city to represent him on the occasion of the marriage ceremony of the daughter of Lachman Singh who, incidentally, is Thakur's creditor, and what is more, holds Lal Haveli itself in mortgage. Her father's indifferent state of health forces her to obey him, and she accordingly starts for the city after having taken leaves and Anand and reassured him of her love and fidelity.

Lachman Singh's son Jawahar is much attracted by Mukta, and cannot help loving her, but feels shy of making his feelings known to her. He, therefore decides to fall back upon his father's influence with Thakur to win Mukta.

On Mukta's return to her village-home accompanied by Jawahar and others, Anand wrongly scents a change in her and loses his head. He resolves to make a short work of Jawahar, and in fit of distemper almost succeeds in carrying it out.

Jawahar's father on the other hand demands the hands of Mukta in marriage with his son, and presses his demands by a threat to take possession of Lal Haveli and demolish it should he dare refuse. Mukta, agrees to sacrifice her own happiness at the altar of the family pride.

This gives Anand the greatest shock of his life, and he leaves the village for good in distraction. In order to drown his miseries in the din and bustle of a busy life he joins the war voluntarily offering himself for active service. While participating in an actual clash Anand receives a direct hit and lies between life and death. Panditji in the meantime manages to stop Mukta's marriage with Jawahar. Being thus frustrated Jawahar swears to wreak vengeance on Mukta by demolishing Lal Haveli and thereby bringing their family-prestige to dust.

Now, whether Lal Haveli is raised to the ground by Jawahar, and his insult avenged, or Anand succumbs to the deadly wound, as also what befell the two rival lovers, and Mukta, the object of their rivalry, are matters which really matter, these are yet to be revealed on the screen. 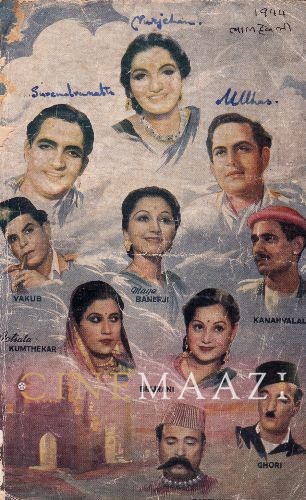