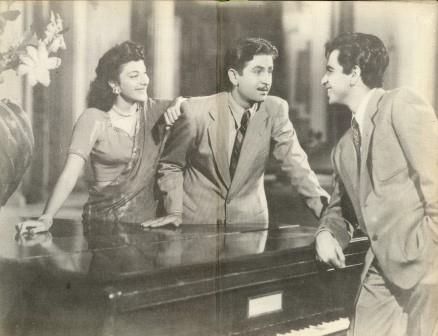 Mehboob Khan's Andaz made in 1948 and released on March 21, 1949, is the kind of film that is made only once. Ever. The film created a sensation and broke all records on its first release and in no time at all proved to be the unique landmark in the history of Indian Cinema.

Mehboob Khan was weaned on Hollywood and continued to be strongly influenced by Hollywood movies throughout his life. Indeed, Hollywood cinema was for decades the only school from which our film-directors and film-technicians learned the art and craft of movie-making.

And Andaz stands as India's first archetypal Hollywood influenced motion-picture. Its gloss was created by the high-key cinematography done by one of India's greatest cinematographers, Faredoon Irani. Its excellent editing, its direct and forceful story-telling are truly remarkable. The interspersion of the immortal melodies of Naushad, the edge-of-seat suspense created by the fateful drama of two men both in love with the same woman and its culmination in the final, inevitable tragedy make it a unique film. The performances, those superb, natural, effortless and subtle performances by Dilip Kumar, Nargis and Raj Kapoor, the magic of which remains even to this day, all this added up to the kind of cinematic experience that, even forty years later, has never been duplicated by anybody else.

If you have not seen Andaz you do not know Hindi cinema. And, if you arc a film-buff, I strongly recommend that you ask your local Film Society (if you have one) to organise a Retrospective of Mehboob Khan's films and go watch them all. Especially Andaz, my all-time favourite. The recent French interest in his films is not surprising at all.

In these days of multi-million rupee star remunerations, multi-crore production costs and multi-year production periods, it is interesting to bring on record some illuminating facts about Mehboob Khan's Andaz. For example, how long do you think it took Mehboob to make this film? Would you believe, Andaz was completed in some 64 to 68 shooting days only! And can you even begin to guess what were the remunerations of the three stars in that film?

Ah, well ... now do you begin to understand why I term the fifties and sixties as the Golden Era of Indian Cinema? Even Naushad's music. the songs of Andaz, are popular to this day and still selling.

Andaz has fathered many foster-children, many imitations over the decades, but the two most memorable ones are, one, Raj Kapoor's Sangam (1964), made and released in the mid-sixties which set formidable box-office records, and two, Sudhakar Bokade's Saajan (1991), the Sanjay Dutt, Madhuri Dixit, Salman Khan starrer which has produced a sensational new director, the unassuming cinematographer Laurence D'Souza. Yes, look at Andaz and Sangam and you will perceive how far back the roots of today's multi-crore superhit Saajan go.

I was not match of an Indian-moviegoer in my school and college days. My earliest memories of Hindi films are nebulous: the "mysterious" Neena (as Baburao Patel of Filmandia used to label her) and Shyam in W.Z. Ahmed's Man Ki Jeet (1944) (I still remember that fulsome tribute in it to the female bosom in the famous Urdu poet Josh Maliabadi's lyric Oh mora jubna ka dekho ubhor); I remember seeing Khazanchi (1941) and Khandan (1942), Sant Tukaram (1948), and maybe one or two more random Hindi and Marathi movies.
It was in 1948, when I completed my B.A. (Hons.) in English Literature at the Elphinstone College in Bombay, that I was drawn like a magnet to the Hindi Cinema. Seeing one particular film and two people were responsible. The film was the late Mehboob Khan's Andaz, and the two "people" were Dilip Kumar and Raj Kapoor who acted in it.

Forsaking a Reserve Bank of India job (after applying for it and getting called for their interview, for which I never went!) I turned instead to film journalism.

I wrote a feature-article on Dilip Kumar and Raj Kapoor and submitted it to Movie Times. The editor B. K. Karanjia accepted and published it. I had not even met him then.

The article clicked. For the next three months- and this is no exaggeration, I have preserved the old clippings to prove it -the Reader's Letters Page was full of nothing but letters triggered off by that one article. Some people agreed with me; others disagreed with me. Vehemently.

That one article on Dilip and Raj made me a film-journalist.

It got me a royal welcome when I eventually called at the offices of Movie Times (situated then just a stone's throw away from where the other magazine Star & Style was later situated for years) to meet B.K. Karanjia, who was to be my first editor between 1948 and 1951, when I left to join in December 1951 the Sunday Standard as its Film Critic-cum-Film Page Editor.

In due course, a few months prior to my joining Filmfare as their Staffer in 1955, I again submitted to them an article about Dilip Kumar and Raj Kapoor, an updated version of the original 1949 article which had first appeared in Movie Times.

And so, what better way to begin FOLLYWOOD FLASHBACK than with that feature article on the two most fabulous people whom I knew intimately since 1951?