Mithun Chakraborty: The Dada of Bollywood 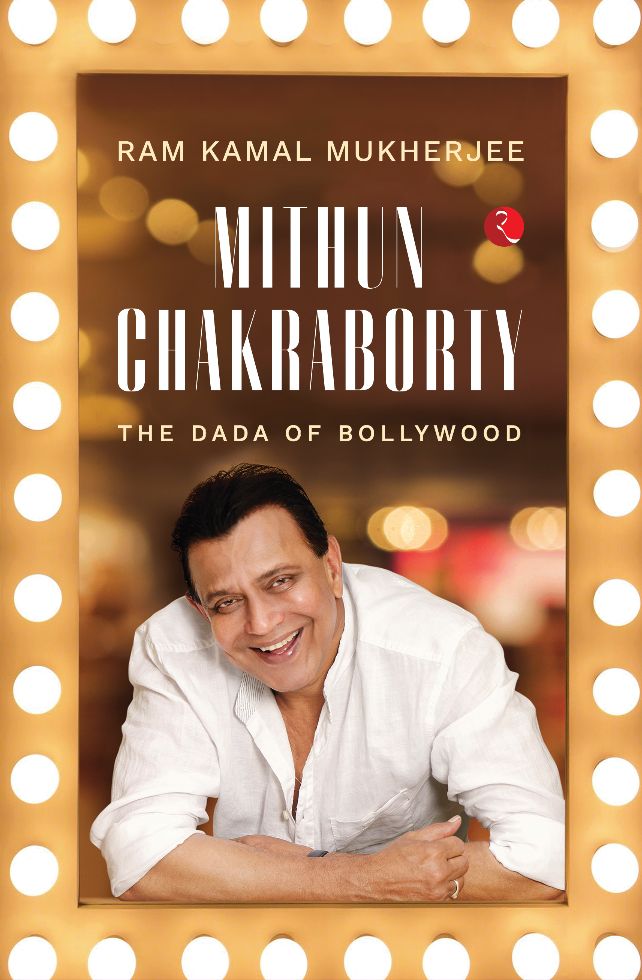 Book Cover Image, Rupa Publications.
"We all wanted him to stand on his own feet, and Dadabhai knew that he was our only saviour,’ Kalyani says emotionally recalling those trying times.

In 1972, on a dark, rainy aßernoon, Mithun arrived at FTII from Bombay. Legendary actor Girish Karnad was the principal at that time and was extremely popular among the students. But ragging was quite rampant at the institute in those days and Mithun had to bear with a fair amount of it.

Mithun bitterly recalls the discrimination he faced. ‘No junior must have been ragged the way I was. In my ﬁrst year, I was woken up in the middle of the night and ordered to strip in front of my seniors and then asked to run to the main gate of the institute. As if that was not enough, I was then thrown into the chilled waters of the swimming pool.’ He pauses and then adds, wistfully. ‘At times, the ragging went beyond limits. I was even asked to make love to the ﬂoor! Looking back, I feel like it was I who asked for it. I set myself up for the ridicule. I gave them a chance to take advantage of my inner complexes, my inhibitions.’

During one of these ragging sessions, one of the seniors made a racist jibe at Bengalis. A brawl broke out, with Mithun kicking, screaming and swearing: ‘If anyone says another thing about Bengalis, I will beat you to a pulp.’ It took the students tremendous eﬀort to pull back the raging tiger. Soon, word of the incident spread across the institute and reached Karnad as well. He took Mithun aside, appreciating his courage. It turned out to be a turning point in Mithun’s life at the FTII.

It would be wrong to assume that life was a bed of roses thereon. ‘I was miserable,’ Mithun often recalls. ‘I was full ofcomplexes and insecurities. The boys and girls in my class were smart. They spoke and dressed so well. I watched them and grew insecure. I thought I would never look like that or talk like them. All my classmates were from big cities, born and brought up in well-to-do families, which made my common background and upbringing all the more evident. They chose to ignore me and the few who spoke wouldn’t talk to me on the same level, and that was worse.’

Mithun realized that he had to change himself drastically if he wanted to survive. After the ﬁrst three months, when he came to Bombay for a short holiday, the ﬁrst thing he did was to go to a salon in a ﬁve-star hotel and give himself a new, fashionable haircut. He then got a couple of new outﬁts tailored before returning to the institute. The new look did wonders to his conﬁdence. He started to communicate better and made more friends.

He was ﬁnally able to ﬁt in. With his keen sense of observation, he even managed to cultivate a distinctive style of his own. With help from Roshan Taneja and Romesh Sharma, who were his teachers, he was able to overcome most of his complexes. It was on their insistence that Mithun began to take an interest in reading. Every day after class, he would go to the library and read for some time. ‘I knew the answers to the questions asked in class, but not how to put it across appropriately and conﬁdently. I had yet to master the right use of words. So, I became my own teacher. I spent every moment of those days picking up little things, learning, educating myself. By the time I was in the second year, I was on my feet.’

His closest friends at the institute were actors Shakti Kapoor and Vijayendra Ghatge. The former was famously mischievous and was usually reined in by Mithun, while Vijayendra was calm and composed.

Recalling those heady days at FTII, Shakti says in an interview to Anubha Sawhney: ‘While on the train, I befriended Anil Verman, who was also going to FTII. He suggested I accompany him to his sister’s home in Mumbai. Once there, I saw Vinod Khanna walk into the house. And with Vinod were Rakesh and Rajesh Roshan! They came to drop us at FTII. We drove in a Ford, beer bottles in hand. I felt like a star!’

When they reached FTII, Shakti Kapoor walked up to this dark guy in a lungi and said, ‘You wanna have some beer?’ Mithun declined. That night, Mithun, Vijayendra and another senior, took Shakti Kapoor into a room, switched oﬀ the lights, splashed water on his face. They also chopped oﬀ his newly styled hair and threatened him with the worst if they caught him drinking. Terriﬁed, he didn’t leave his room for the next four days.

Shakti Kapoor adds that he lived oﬀ Mithun. After the initial ragging, they became friends. Each night, as they sat down to eat, Shakti would ask: ‘Mithun, thoda khana dega? (Mithun, will you give me some food?)’ He never refused. Since Mithun had moved to Bombay before Shakti, the latter landed up at his rented place and forced him to pay double the rent. There was a time when Mithun told their common friends not to disclose his whereabouts, lest Shakti land up at his place!

Soon, Mithun became the captain of the ﬁrst-year football team. He played so well that even his seniors were impressed and soon he was made the captain of the entire senior and junior team. He scored well in his ﬁrst-year exams. In the ﬁnal year, his eﬀorts became more intense as he kept pushing himself harder.

Despite the hard work and activities, and the growing popularity, deep down, Mithun was worried for his family back in Calcutta. He knew what kind of hardships they had faced to ﬁnance his studies in Pune. In the meantime, he also got acquainted with Mohan Agashe, who was not a student at the institute but would sometimes drop by. Agashe was doing his master’s in psychology and was passionate about acting. Surendra Suri was a student of direction, who knew both Mithun and Agashe quite well. Eventually both of them acted in Suri’s diploma ﬁlm, Anahut. It was a short ﬁlm based on a story by Albert Camus. Mithun played the role of a convict, which was quite challenging. He caught everyone’s attention with his performance in this ﬁlm. He also acted in another diploma ﬁlm called Atithi. Both the ﬁlms were of high calibre and the Calcutta ﬁlm club called Cine Commune screened both the movies to its members.

Before the ﬁnal exams, Mithun asked his mother for another ₹300 for his college fees and other expenses. The family was already struggling with the hostel, food and course fee, so this additional expense posed a problem for them. His mother, however, took a loan from their neighbour to fund Mithun’s dream. Mithun secured a ﬁrst class in the ﬁnal exam—the result was beyond his expectation as well as that of his family’s. Mithun passed out of FTII in 1974. As he stood outside the institute gate for one last time, he felt sad and his heart grew heavy."

This extract is taken from the book 'Mithun Chakraborty: The Dada of Bollywood', published by Rupa Publications Pvt. Ltd., coming out this September, 2021.
550 views

Ram Kamal Mukherjee, India’s first Power Brand film journalist, is a columnist, producer and director. Winner of many coveted titles, Ram Kamal is one of the most popular personalities and influencers in the Indian film fraternity. He has worked as Editor-in-Chief of Stardust, India’s leading film magazine. A film journalist for twenty years, he was also associated with The Times of India, The Asian Age, Mid-day and
Anandabazar Patrika. As Vice President of Pritish Nandy Communications, he has worked on twelve feature films. His biography of Hema Malini, Beyond the Dream Girl (2017), won him five prestigious Best Author awards. Ram Kamal has written a coffee table book, Diva Unveiled (2005); a work of fiction, Long Island Iced Tea (2016); and a collection of Hindi poems, Muktakash (2019).

Other Articles by Ram Kamal Mukherjee

Sanjay Dutt: Between Myth and Reality