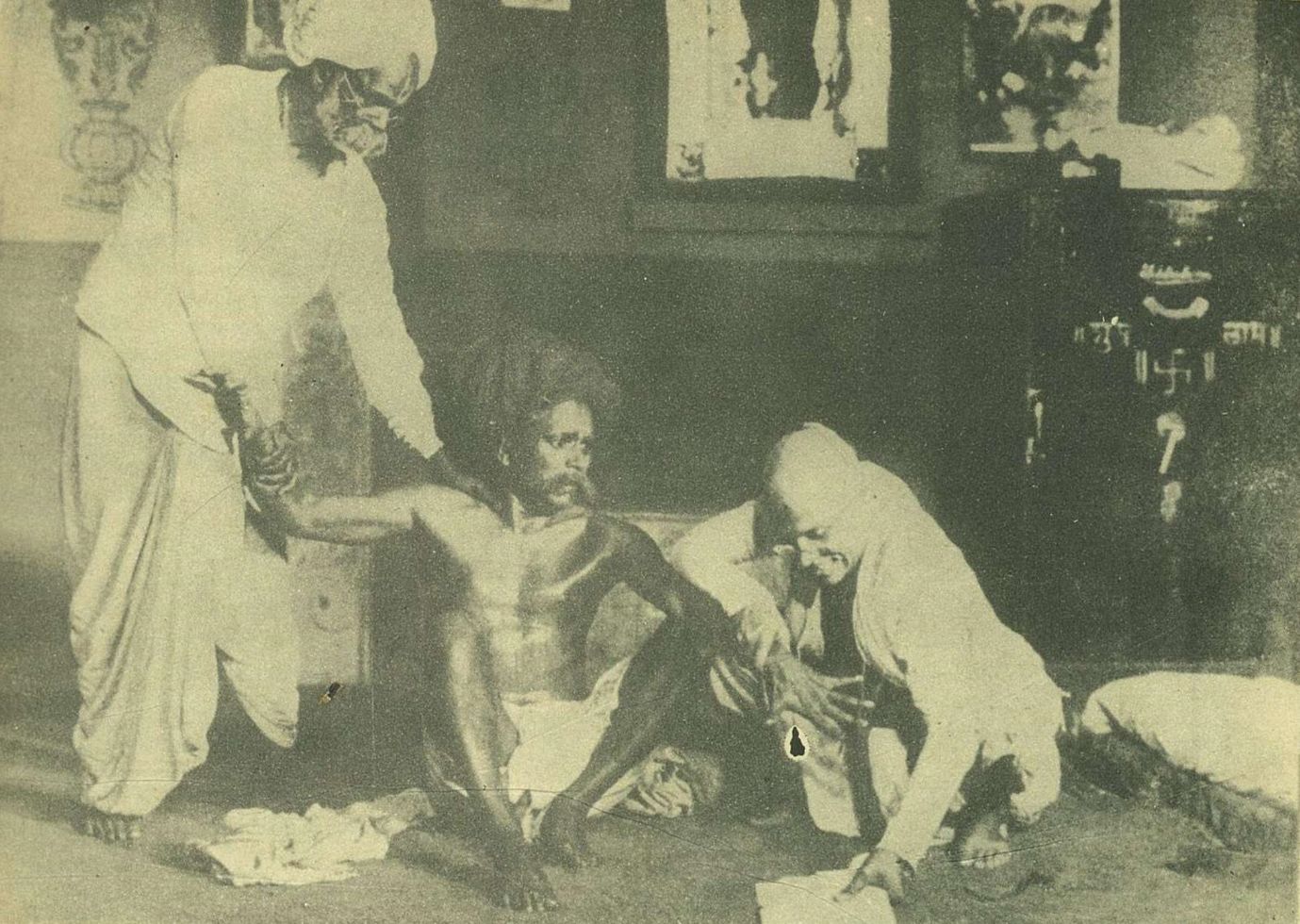 A still from Savkari Pash

In this issue, which marks the completion of two years of "Movie Memories", let us recall a memorable film that was made in two versions, silent and talkie, both of which were considered outstanding in presenting the tragic side of rural existence and attaining a high degree of realism. It is the old, forgotten and by now also totally lost film Savkari Pash of pioneer director Baburao Painter, which was first made in the silent era (1925) under his own banner Maharashtra Films Company and later re-made by him in 1936 as a Marathi talkie for Shalini Cinetone, which was also situated in Kolhapur like the first company.

Savkari Pash, which literally means the money-lender's clutches, was the earliest film to draw attention to the plight of the illiterate and helpless peasant, hopelessly indebted to the shrewd money-lender, who takes full advantage of the situation to deprive the poor farmer of all his belongings, including his precious land. It is said that the silent version had Indian Shylock as its English name, which correctly described the villain of the piece. This film had V. Shantaram acting as the young farmer. The famous producer-director of today was then an actor and technician with Baburao Painter.

The silent film had the regional slant of a Marathi film, as the story was located in a small village of Maharashtra with all its typical characters and traditions. That is why, perhaps, Painter did not think it fit to re-make the film in Hindi. It would have lost its realism, just as some of today's new filmmakers prefer to make certain subjects only in regional tongues. This is an indirect tribute to Painter's sense of realism in that period, apart from his efforts to make the film on real village locales and in a stark, grim style.

The film's purpose was to bring into focus the Indian farmer's illiteracy which drove him to become a pawn in the hands of the sharks, who manipulated the account books to fleece and ruin him. When the farmer's young son (representing the new generation) fights against it, the moneylender uses all his powers to get him beaten and jailed. The land is annexed, the few possessions are auctioned and the old farmer, reduced to a labourer's level, breathes his last, before he can see his son again.

The tragedy must have had its desired effect in bringing some awakening somewhere. Later on, laws were passed to protect the farmers from these cruel methods and provision made for easier credit facilities. Many of the later Indian films were inspired by Savkari Pash. In a way, Mehboob's Aurat (1940) and its remake Mother India (1957), Bimal Roy's Do Bigha Zamin (1953) and some other realistic films of this type seem to owe their plots to the same thematic idea, which was given its first realistic treatment by Baburao Painter.

This article was originally published in Star & Style magazine's 28 May 1971 issue. The image is taken from the original article.