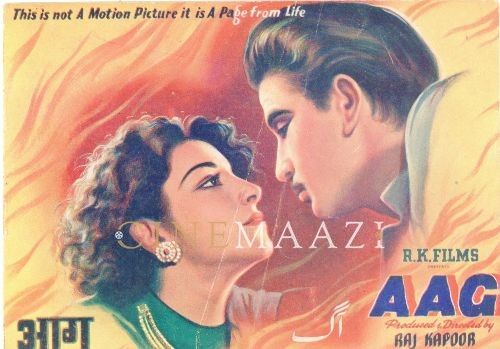 Aag is the maiden production of Raj Kapoor. He has written the scenario, directed and produced the picture, and has also played the main role in the story. And Raj Kapoor is only 23 our youngest producer in the country. But the boy has produced a picture, or rather the picture, that takes our vote as easily the best picture of the year in art, purpose and presentation. The boy has beaten all grey-haired tall talkers who strut about as great devotees of film art bragging about their "purposeful" productions which have neither purpose nor art.

Raj Kapoor gives a promise of a brilliant future if only he doesn't go the way of the old dogs. We pray he doesn't, for, film production is still a very degenerate profession in India in the midst of mangy mongrels who infect everything within a radius of 100 miles.

Aag is an idealistic story. It has a dreamy biographical aspect which almost makes it the life-story of Raj himself as he would probably like to have lived. It is, however, not so in real life because Raj's father, Prithviraj, is himself a great artist and stage producer and unlike Rai Saheb, the father of the hero in Aag has inspired his son to dedicate his life to the service of art.

And yet quite a few of Raj's own daydreams and inhibitions have found their expression in Aag thus making the story all the more intimate and appealing. There are moments when Raj seems to forget himself completely and lives in the world of his dreams and it is at such moments that the spectators cannot help but identify certain sequences in the story with the unsaid episodes of Raj's own life. For, Raj is too well brought up and polite to let his dreams turn into scandals in real life, but in Aag, desires take wings and fly out of the soul in the guise of art. Aag thus becomes a peep-show of the soul of an artist.

The story opens in the bridal chamber of Sudha the bride of Keval, a stage producer with one half of his face scarred with frightful burns. He has been married to the girl much against his will and as he had all along expected, the young bride screams at the frightful sight of her husband. Here starts the flash-back of his life story.

We are soon shown how a travelling stage company first inspires Keval to join the stage. Keval builds his future castles with a little playmate, Nimi. who is to be his principal heroine and partner in the ambition and adventure of life. Nimi's parents move to another town and Keval loses his inspiration.

Years roll by and studies become irksome to Keval whose main interest in the college is the theatrical play which the students had planned under Keval's direction with Nirmala a co-student, as the heroine. On the eve of the performance. Nirmala's parents take away their daughter to be wedded, leaving Keval once more in the lurch.

Keval soon leaves his father's roof and loafs around the theatre area, hungry and broken. Here imagination has been stretched to meet coincidence halfway and we see Keval stumbling into Rajan, a rich artist, owning an empty theatre and madly in love with his own dream girl.

Though there are no Rajans in the real theatre world, let us permit this happy accident as a writer's license in optimism.

Rajan agrees to help Keval to build his dream castle and Keval gets going, relentless in his pursuit of art. He meets his new Nimi, after a long search, and makes her a great artiste by constant training. Nimi and Keval learn to love each other, unaware of the passionate love Rajan has in the meanwhile developed for Nimi. Just before the performance Rajan acts crazy and reveals his passion for Nimmi. Keval is shocked. With his hypersensitive soul he already fancies himself in the ruins of his ambitions. After a passionate scene with Nimi, Keval takes a lighted torch and burns himself. The theatre also catches fire and the show is ruined. All are, however, saved but as Keval comes out last and Nimi sees him burnt and frightful, she screams in horror and in a moment her love for him vanishes.

As Keval reaches the end of his story, his bride Sudha, who is no one else but Nimi, the playmate of his childhood, runs up to Keval with all the love of her childhood and reveals her identity.

Thus ends a great story which storywriter Inder Raj has given to the screen with the eloquence of a sincere artist.

The production values are of an unusually high standard. The camera has been used with suitable psychological effects and at places the shadows create a devastating impression on the mind. The processing work, however, is not happy throughout, particularly the dissolves which have been carelessly executed. The music is suitable to the mood of the moments without being cheap. The dialogue is simple yet superb and Inder Raj puts to shame many an experienced screen writer.

From the players, Raj Kapoor dominates the show completely, living his role to perfection. Nargis who plays the stage Nimi acts well only above the shoulders, especially in pathetic situations. But in the dance sequences, her deformed back and squeezed-up figure without any grace or contours become repulsive. Kamini Kaushal looks far from attractive as Nirmala. She has a thin piping voice which cannot be impregnated with emotion. This woman fails to impress. Nigar looks sweet as the bride, in spite of her light eyes. Prem Nath gives an unconvincing performance as Rajan, the love-sick artist. In love, the eyes get fogged with emotions and not blank as Rajan's eyes constantly look. Kamal Kapoor wears a suit clumsily with his puny, round shoulders. He, however, speaks his dialogues well.

A ridiculous feature of his makeup was the moustache which Prithviraj sports in Pathan (1947). Almost everyone in Aag with a moustache has the same pattern and it looks silly on every face. Moustaches have characters of their own and different faces demand different types.

Aag is a picture worth going a long way to see. In spite of its art and idealism, or perhaps because of it, the picture has become popular also with the crowds. The box-office success of Aag thus provides a new argument for better pictures.

This review was originally published in the Film India (1948). The images used are taken from Cinemaazi archive and were not part of the original article.
671 views