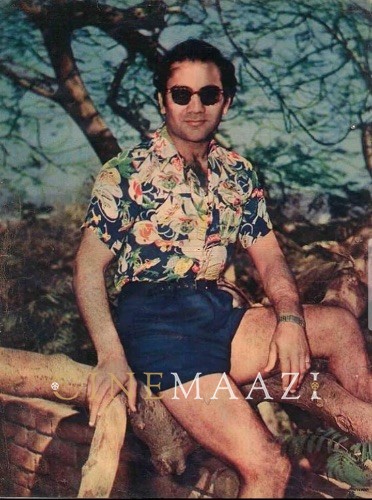 Born on 21 November, 1926 in Peshawar, British India, his father, Kartarnath Malhotra, was a high-ranking police officer, and also the maternal uncle of Prithviraj Kapoor. The Malhotra family moved to Jabalpur post Partition. Moving to Bombay, Prem Nath was one of the early members of Prithviraj Kapoor’s Prithvi Theatres. He went on to be discovered as an actor. Making his film debut in one of the first colour films, Ajit (1948), opposite Monica Desai, he went on to bag key roles in Raj Kapoor's directorial debut, Aag (1948), followed by Barsaat (1949). The film turned out to be his first big hit. He honed his acting style, and his tough-guy image. He went on to star in Badal (1951), opposite Madhubala, no less. The film clicked at the box office, and Prem Nath thereafter appeared in several films over the next three decades. These included some of the biggest blockbusters in Indian film history. However, the films in which he played the leading role failed to hit the mark while those which featured him as a villain or in a supporting role, found favour at the turnstiles, leading to a change in course. His career took a definite turn in his comeback film of sorts—Vijay Anand’s thriller Johny Mera Naam (1970), starring Dev Anand, Pran and Hema Malini, in which Prem Nath plays a smuggler masquerading as a prince. His villainy was thoroughly emphasised thereafter.

Besides Hindi films, Prem Nath starred in the Punjabi film Sat Sri Akal (1977), an American film Kenner (1969) and an episode of the American television series Maya in 1967. He directed a film - Samundar (1957) for his home production house P. N. Films. However, he had an unsuccessful run as a producer of four films and three documentaries. He was last seen onscreen in Hum Dono (1985), following which he retired from acting.

A deeply spiritual man, Prem Nath wrote novels in Hindi and English. In fact, he had traversed to the Kailash mountain in Tibet in the mid-1950s, as he was uneasy with the trajectory of his career. He even made a documentary of his travels, Kailas Darshan, in 1957.

On the personal front, Prem Nath was married to actress Bina Rai, whom he had met during the filming of Aurat (1953), which was inspired by the biblical tale of Samson and Delilah. The couple set up their own production house, known as PN Films, producing Shagufa (1953). The film failed, and their pairing onscreen did not succeed even in the films that followed, namely Prisoner of Golconda (1954), Samunder (1957) and Hamara Watan (1956), all of which failed at the box office.

Prem Nath’s brothers, Rajendra Nath and Narendra Nath were also seen in comic and supporting roles onscreen. His sister Krishna was married to Raj Kapoor, while his other sister Uma was married to Prem Chopra. Prem Nath’s son Prem Krishen became an actor turned TV and film producer and the owner of Cinevistaas Limited, while his other son Monty Nath was also an actor and director, known for Purana Andaz (1990), Prem Rog (1982) and Ek Se Bhale Do (1985). Of Prem Krishen’s children, Akanksha Malhotra became an actress while Siddharth Malhotra turned director.
Prem Nath suffered a heart attack and passed away on 3 November, 1992.

His son, Monty Nath directed a documentary, Amar Prem Nath: Last of the Titans (1995) which shed light on the actor’s life, including his struggle to gain a foothold in films. The documentary includes interviews with 24 actors, including his co-star and wife Bina Rai, Ajit, Amrish Puri, Sunil Dutt, Pran, Dara Singh, Shammi Kapoor, and Vinod Khanna, who share instances of Prem Nath’s versatility, friendliness, generosity, and dedication to films.