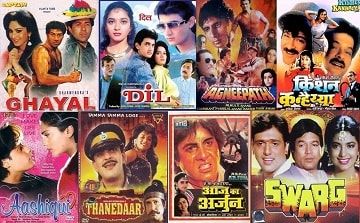 An amorphous, blurringly-defined institution like the Hindi film industry cannot exist in a vacuum. Ironically the commerce of Hindi Cinema had to take a beating during the year as collections dipped.

This is a sad state of affairs considering that things were really looking up in an industry where speculations were ripe about its very survival with its superstar Amitabh Bachchan shedding glow, continuing video piracy and emergence of an alternate mass media, television.


G.P. Sippy comments: "more and more films with new stars are being launched. This is because the production costs have gone very high and the returns are diminishing. Today, there is no average film. Either the films do good business, or flop and do not even bring in the cost of production in prints and publicity. It is precisely because of this - to cut down the cost that I have launched Patthar Ke Phool with Salman Khan and Raveena Tandon so that the film can be made with reasonable investment, be a good entertainer and also recover a reasonable profit."

But Sippy does not believe that the love-story phase will last because he foresees the factor of audience-resistance to the same theme after a particular threshold has been crossed, as it has happened in the case of violence and revenge. Despite the unprecedented success of Ghayal and Pratibandh, many films on violence have bombed at the box office.

"Exhibitors have raised their rentals exorbitantly and this has affected the box office collections badly" says Gulshan Rai. "I feel that the distributors and the theatre owners should be allowed to deal directly with themselves instead of with a party charging brokerage" he concludes.

"But high rentals do not affect the box office value of a film if the film is really good" says Satpal Singh, a leading exhibitor. To substantiate his statement, he adds: "even when the ticket rates for Maine Pyar Kiya at Satyam in Bombay were hiked to Rs. 15/-, the film did good business and when NFDC's prize­ winning Panorama film Bagh Bahadur was released at tax-free ticket rates, there was no audience. People don't mind paying high ticket rates if the film is good."

U.A. Thadani, Pranlal Doshi and Russ Balaporia, leading exhibitors of Bombay, feel that video, cable TV and good TV programmes have taken their toll on the theatre collections. Besides, the electricity bills have gone up to Rs. 70,000 per month as against Rs. 30,000/- just a few years ago. And of the collections, say the exhibitors, they collect only 50 per cent and the remaining is taken away by the Government.


But the amount collected by way of entertainment tax by the Government of Maharastra spells a different story altogether. From its six districts, the State Government collected Rs. 64.52 crores in 1989-1990 of which Rs. 25.37 crores or 39.32 per cent came from Greater Bombay alone and the budgeted entertainment tax for the year 1990-91 is Rs. 70.16 crores. At the same time, there is no denying the fact that 69 cinemas have closed down in the State and a few handful have renovated their theatres and hiked their rates of admission.

"It is good and advance publicity that helps in the marketing of a film and helps in deciding its fate at the box office" says leading distributor Ramesh Sippy (not to be confused with director Ramesh Sippy). "Newspaper publicity is a must because it helps in building up a momentum and hits the mind of the audience" he adds.
"Publicity through trailers is also a good gimmick as these are audiovisual but since they are allowed release only a week before the actual release of the film, they do not help much. Radio publicity and previews should start at least two to three weeks before the film's release. Audio cassettes offer excellent publicity before the film's release. Take the example of Aashiqui. Today, a distributor can spend upto Rs. 5 lakhs just on the publicity of the film. After adding a song in Dil, we had to revive the publicity with "more money put in and it paid us right back" said Sippy.

Some of the new films which were to have been released but are being held back are - Farishtay, Ajooba, etc. Aaj Ke Shaenshah was also held back but has now been released. Producers I.A. Desai and Saleem Khan who decided to release Aaj Ke Sahenshah say: "there is no point in delaying the release of the film and further since our distributors are prepared to face the results."

Tajdar Amrohi of Kamalistan Studios says: "one shift a day has reduced our business by 50 per cent. When there were three-four shifts a day, we had four to five bookings daily and now, the studios remain empty for at least 15 days a month." But Atmaram of Natraj Studios does not agree. "There has been no negative effect on the studio business because of the wide diversification of fields. We now have ad films and TV serials being shot in our studios and for lavish and large sets, directors still choose a studio." Tajdar adds that producers are now willing to compromise on the quality of a film by shooting in bungalows because today, the priority of money-making has over-ruled creativity. Most of the studio-owners today have inherited these studios from their parents and so, they keep the studios functioning more due to a feeling of family loyalty and homesickness than for making money.

Rajinder Singh, President of the Indian Film Exporters Association bemoans that the Gulf war and the unstable situation in the Middle East have brought down the earnings of the exporters of Indian films by 25 to 30 per cent.

The only bright silver lining is the 15 per cent hike in technicians' fees brought forth through a mutual compromise between the Film Makers' Combine and the Federation of Western Indian Cine Employees who luckily and surprisingly had Mithun Chakravarty pleading their cause!

The video market despite the piracy indulged in by the 15000 video libraries (which compulsorily have to buy the original cassettes of each film) and the home video distributors, has expanded to such an extent that the returns vary between Rs. 50 lakhs for an average film to over Rs. 1crore for a hit film. Video distributors are earning more than a crore on Amitabh starrers and some of them are making two different cassettes of the same film by adding or deleting a song sequence or a fight sequence. This has dealt a blow to the producers in the industry. They are forced to sell cable TV rights of their new films.

In this very funny industry where the hairdresser of a main star earns Rs. 10,000 per month and a technician after a hike of 15 per cent earns Rs. 230/- to Rs. 330/-, life can only be lived from moment to moment - in risk, in suspense, in drama, waiting for some miracle to happen at any time. And believe it or not, it does happen! Much like a Hindi film!

The article was first published in the Indian Cinema 1990 issue. Images in the article have been taken from the Cinemaazi archive and the internet.
415 views