Once upon a time in a kingdom called Baharistan a child was born to the Sultan and Malika of the state. The couple was very happy since this was their only child who had survived.

However, the Vazir of the state wanted to de-throne the Sultan and kill him for which a coup was planned and the entire blame for this was put on the Sultan's friend Ameer Baba, who had come from Hind to Baharistan to participate in the festivities on the birth of their heir. The heir (Ali) survived as destined and predicted by the astronomers of Baharistan and was brought up by a blacksmith who was unaware of the child's (Ali) real identity.

Vazir was a tyrant who oppressed the poor and suppressed all resistance against his tyrannical rule "Ajooba" the legend was treated as the only protector of the people of Baharistan. "Ajooba" was none other than grown up Ali in disguise known only to a few.

Ameer Baba's daughter Rukhsana, who had started in search of her father from Hind, was captured by Vazir's son Altaf from where Ajooba saved her and she fell in love with him.

Ali's friend Hassan a potter's son was in love with Vazir's daughter Henna and it was tough to meet her being a commoner. Ali one day discovered a blind beggar woman who was ill-treated by Shahrukh, Vazir's brother-in-law, but was saved by "Ajooba" (Ali). In reality, she was the Queen who had turned blind at the time of the attacked on the Royal family by Vazir some twenty years ago. Ali helped Rukhsana and Ameer Baba to escape from the prison of the evil Vazir and united both father and daughter. Ameer Baba could see through his magic ring what was happening to his wife Zarina in Hind miles away.

Just then he also recognised a faith healer, moral preacher "Peer Baba", who was actually the Sultan himself, but who had lost his memory due to the shock of what had happened twenty years ago.

This gave the clue to Ali and others that the Sultan is alive and so is Malika and to re-instate the Sultan would be a difficult task for Ali, Hassan and others.

Did they succeed in their mission? If so, how they achieved is the story of "AJOOBA". 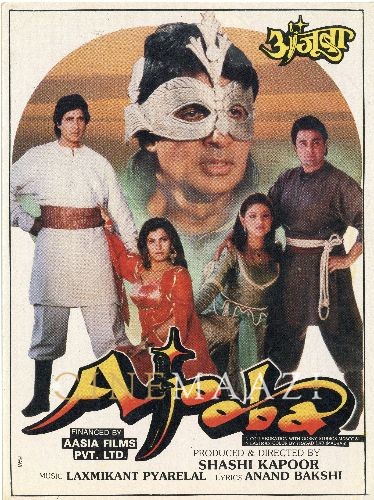