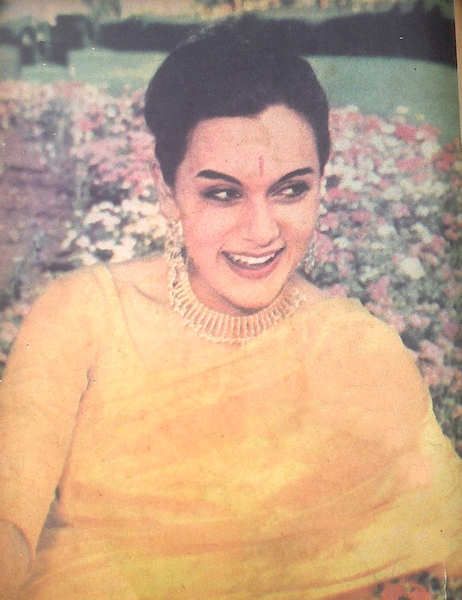 Meet Priya Rajvansh, the lively new discovery, who attracts attention in local film colony by her sheer looks and pleasant demeanour. Everyone here talks about her in superlatives. She has created a deep impression among the film folk and critics even before appearing in front of the movie camera. That’s something to be admired. Tall, slim and elegant, she is uncommonly beautiful, smart and intelligent. Rarely do beauty and brain combine to make a person outstanding. She is therefore lucky to possess both.

In fact, Priya Rajvansh stands out among all new discoveries of the Indian screen, for she is the only one in the colony, who has had an extensive training at the Royal Academy of Dramatic Art in London. Besides being attractive she is a brilliant conversationalist with a reservoir of knowledge on men and matter. Brimming with life and enthusiasm she is, in fact, a picture of beauty and health.

Priya Rajvansh is being introduced to the Indian screen by Chetan Anand in his forthcoming picture Kafir (Infidel). The latter who was responsible for giving us Kamini Kaushal and Kalpana Kartik, should indeed be congratulated on discovering yet another scintillating new artiste for the Indian screen which needs more and more newcomers for its growth and prosperity. Could you believe it when I say that he chose her for the role of the heroine in his film even without meeting her?

It happened like this. One of his friends informed Chetan some months ago that he knew of an Indian girl in London who was keen on acting in Indian films. Chetan who was then looking for a new girl for the heroine’s role in his film told him to advise her to write to him, enclosing her photograph. Accordingly, the girl wrote to Chetan and when he saw her photograph, he said to himself that his search for a new heroine was at an end. He then sent for her from London at once. She flew into Bombay about four months ago and on her arrival here, Chetan who is also good at selecting fascinating names, gave her the screen name of Priya Rajvansh. Before that, she was known as Vera Singh.

Priya is the daughter of Sikh father and a Punjabi Hindu mother. She was born in Jhelum (now Pakistan) on December 30th, 1939. Her father, who is now in the employ of the Sudan Government, was then a Forest officer of the Indian Government in Jhelum. The partition of the country affected her family to a considerable extent. They very narrowly escaped death at the hands of those who waged a war during the holocaust in the Punjab. The family moved to Simla, where she joined the exclusive Auckland House School.

Priya studied hard and became one of the brightest students of the school, where at the age of nine she started acting on the stage. Her maiden vehicle was an English play called “World Without Men”, in which she was an instant hit. She was adjudged as the “Best Actress” for the outstanding performance in the play by the panel of judges set up by the School Committee. She as at the same time so good in her studies that she passed her Senior Cambridge examination just when she was thirteen. At school, she was also popular and that won her the status of “Captain” in her class. Joining the Bhargave Municipal College, she continued to stand first in her class. Her forte were Mathematics and English while her special subjects were Economics and Political Science. She took her B.A. degree in 1956 with distinction.

Priya’s active entry into the theatre world after the graduation took place on account of Balraj Sahni. The latter, during one of his visits to Simla, saw her in a play, organized in connection with the Youth Festival there. He was so much moved by her performance that he went straight to her father and implored him to send her to the Royal Academy of Dramatic Art in London for a training in acting and stage craft. Her progressive minded parents, who knew the inclinations of their daughter, at once acted on his advice and sent her to London.

At the RADA, Priya underwent a thorough course of training for four years in modern acting, pantomime audition technique, voice production, make-up and stage management. During her stay in London, she had several occasions to work on the stage and for the radio and TV. She did also quite a bit of modelling in U.K. and Vienna where her elder brother is working as an officer in the Atomic Energy Commission. At one of her stage performances in London, an Indian producer by name Ranvir Singh, who runs a production concern called Himalaya Films in London, spotted her and straightaway signed her up for the feminine lead in an English picture to be known as “The Long Duel”. Since some delay occurred in the launching of this film, Ranvir Singh agreed to lend her services to Chetan Anand.

In Chetan Anand’s picture Kafir, Priya Rajvansh plays the role of a Pakistani Muslim girl in love with a Hindu doctor, a role which may be played by Chetan Anand himself. He revealed to me the other day that the story of his film was set during the period of Partition of the country, when several innocent lives were lost. The picture would graphically depict the important incidents that took place in the country in that period and at the same time spotlight an undercurrent of forbidden love. Besides being responsible for the story, screenplay and dialogue, Chetan Anand would produce and direct the picture with Geeta Bali, Pritibala and Wasi Khan in support. The lyrics composed by Sahir Ludhianvi are being tuned by Khayyam. Four songs have already been recorded, two of which I heard the other day. They impressed me a great deal with their melody and rhythmic quality. Art direction is in the hands of Sathyu, while Lachu Maharaj is in charge of choreography for the film.

Priya Rajvansh who is being groomed into a fine artiste told me the other day, when I met her at the song-recording session for Kafir at Mehboob Studios, that she was keen on making a career in Indian films. “There were several proposals from eligible bachelors for my marriage”, she said, “but I have rejected them all for the present, since I am longing to become a successful screen artiste. I am sure I can become one, because I am determined about it. The experiences I have gained in London have given me enough courage to make an independent living. Marriage can wait. Fortunately, I have understanding parents, who have great faith in me. I have a one-track mind. How to become a successful movie star? That is the question which is now engaging my attention. I hope all of you will help me to become one”.

“Sure”, I said, while a veteran producer, who was sitting next to me, nodded in agreement and remarked “The industry needs artistes like Priya Rajvansh”

Cinemaazi thanks Sudarshan Talwar and Cineplot for contributing this interview which was was conducted in April 1960 by T.M. Ramachandran