Actress Kalpana Kartik is known for films such as Baazi (1951), Aandhiyan (1952), Humsafar (1953), Taxi Driver (1954), House No. 44 (1955), and Nau Do Gyarah (1957). All her films saw her paired opposite Dev Anand onscreen—she also married the popular actor in 1954. She is also credited as the associate producer of films such as Tere Ghar Ke Samne (1963), Jewel Thief (1967), Prem Pujari (1970), Shareef Budmaash (1973), Heera Panna (1973), and Jaaneman (1976). A beauty queen, her real name Mona Singha was changed by filmmaker Chetan Anand to Kalpana Kartik, for her new career as a film actress. She became a part of Navketan Films, started in 1949 by actor-director and producer Dev Anand and his elder brother Chetan Anand, when it was beginning to spread its wings, and she was associated with the film company during its most momentous years. She started with Baazi, the debut of Guru Dutt and ended with Nau Do Gyarah, the debut film of Vijay Anand. Between these two films came Taxi Driver, which is considered the coming of age film of the Navketan banner, and was its first super-success. Her time in Navketan witnessed different directors at the helm, including Guru Dutt, Chetan Anand, and Vijay Anand.

After featuring in six prominent films is the 50s, she stayed away from the screen and remained content being superstar Dev Anand’s wife post their hit film together, Nau Do Gyarah.

She was born Mona Singha on 19 September, 1931 into a Punjabi Christian family in Lahore. Her father was the Tehsildar of Batala in Gurdaspur District. The youngest of five brothers and two sisters, her family moved to Shimla post Partition. A student of St. Bede's College, Shimla, she was in her graduation year when she won the Miss Shimla contest. She went on to be noticed by Chetan Anand, the filmmaker from Bombay, who was a relative of her mother’s via marriage. He managed to convince Mona’s family to allow her to join his new film company, Navketan Films. Set to debut as a leading lady, she was re-christened Kalpana Kartik and moved to Bombay.

She made her debut in films with Navketan Films’ Baazi in 1951. A noir film directed by Guru Dutt, it was the second film of Dev Anand's production house Navketan Films. The film starred Dev Anand as Madan with Geeta Bali as the nightclub dancer Leena. Kalpana Kartik essayed the role of the sophisticated and cultured Dr Rajani, who opens a free clinic in to treat the poor and needy, and helps Madan out in the treatment of his sister, who is suffering from tuberculosis. Both are attracted to each other and soon fall in love. However, Rajani’s father conspires to keep them apart. This crime thriller which had excellent music by S D Burman, became a hit at the box office, and was the second highest grossing film of 1951 after Awaara. Becoming a landmark in Indian cinema, the success of Baazi gave several careers a boost.

Her next release was Aandhiyan, a drama written and directed by Chetan Anand. The story was written by Chetan Anand and Hameed Butt, based on an actual event in Amritsar. It starred Dev Anand, Nimmi and Kalpana Kartik in lead roles. The music of the film was composed by classical musician Ali Akbar Khan, with lyrics by Narendra Sharma. The story of the film revolved around Ram Mohan (Dev Anand), an honest lawyer who is in love with Janaki (Kalpana Kartik), the beautiful daughter of Din Dayal. Din Dayal is agreeable to their marriage; however, Kuber Das (K N Singh), a rich businessman, lusts for Janaki. In order to marry her, he devises a wicked plan. He asks the already cash-strapped Din Dayal to either sell off his assets and repay the loan he had given him in the past, or give his daughter Janaki's hand to him in marriage. The film was well scripted and direction, and also won international accolades at the Venice, Moscow and Peking film festivals.

Humsafar (1953), in which Kartik next featured, presented a powerful human drama based on the dacoit menace in the country. It was directed by A N Bannerjee, and starred Dev Anand as the male lead.

She next acted in Taxi Driver, the romantic musical film produced by Navketan Films. It was directed by Chetan Anand, and starred his brother Dev Anand, along with Kalpana Kartik, Sheila Ramani and Johnny Walker. The film was written by Chetan himself, along with his wife Uma Anand and his other brother Vijay Anand. The film told the story of Mangal (Dev Anand), who drives a taxi by day, and listens to his singer girlfriend Sylvie (Sheila Ramani) by night, and then goes into a drunken stupor. One day, while assisting another taxi driver, Mangal comes to the assistance of a damsel in distress, Mala (Kalpana Kartik) who is being molested by two thugs. The film follows their romance and the hurdles that arise.

Kartik’s next release, House No. 44 was directed by M K Burman and produced by Dev Anand for his banner Navketan Films. The film had popular songs with music by S D Burman and lyrics by Sahir Ludhianvi, including Teri duniya mein jeene se and Chup hai dharti chup hain chand sitaare. The film revolved around Ashok (Dev Anand) who works for a notorious gangster Sunder. One day, he comes across a dead body and he reports it to the police. Ashok meets Nimmo (Kalpana Kartik) whom he falls in love with. Nimmo asks Ashok to leave his life of crime and settle down with her. However, finding it difficult to earn a decent living, he is torn between his love for Nimmo and his work as a gangster.

Kalpana Kartik’s next and last film was Nau Do Gyarah. The Hindi phrase translates as "to run away”. A comedy thriller produced by Dev Anand, the film was his brother, Vijay Anand's directorial debut. The film had music by S D Burman with lyrics by Majrooh Sultanpuri. It was loosely based on the 1934 American film It Happened One Night.

Kalpana had married Dev Anand secretly in 1954, during a shooting break as they filmed Taxi Driver. Years later Dev Anand would reveal that she was beautiful, bubbly, naughty and educated. They fell in love on the sets of their first film together and decided to get married secretly, and later host a reception. They became parents to Suneil Anand, who entered films, and Devina. Post marriage, Kartik quit her acting career and stayed away from the media as well. Her later interests include spiritualism and old classic literature. 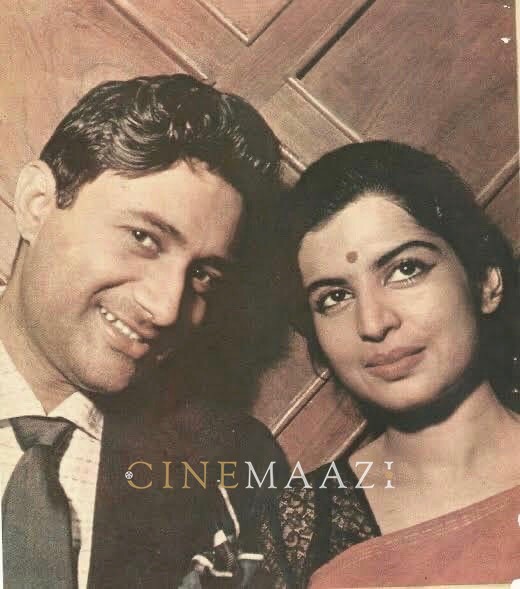