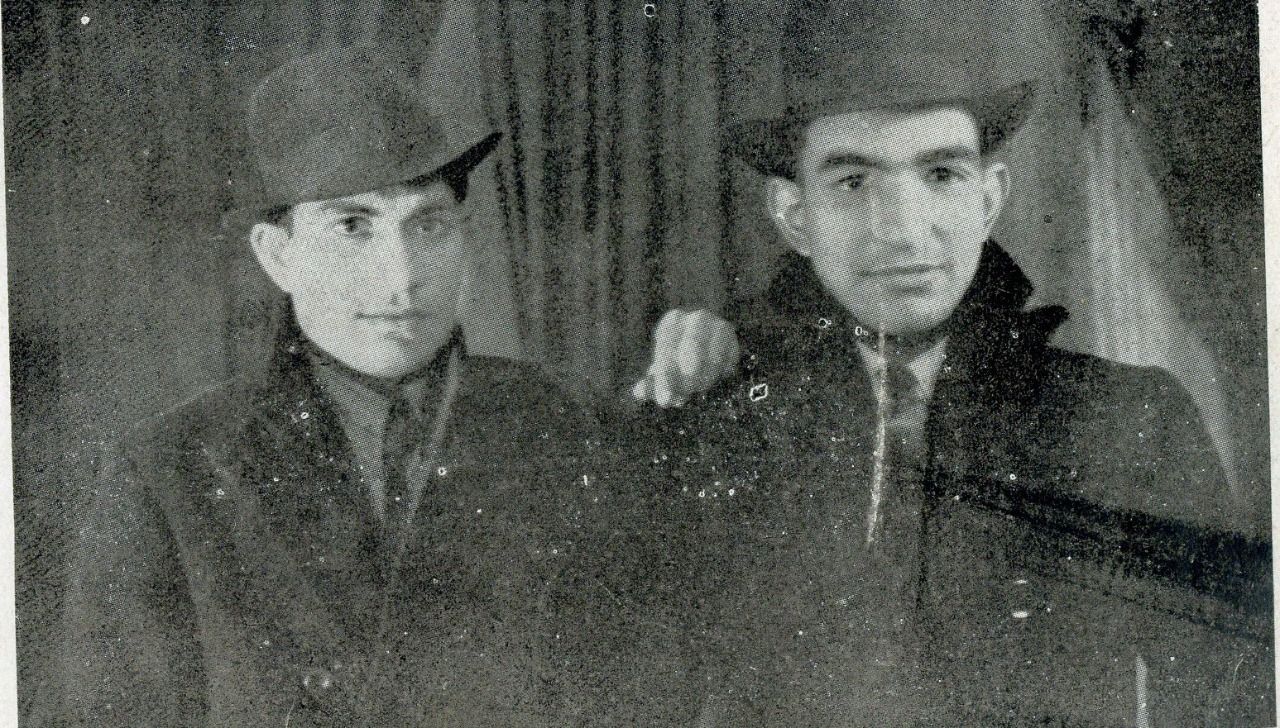 The Authors: B R Chopra and S A Rashid. Image Credit: Cine Herald

The world is becoming a strange cosmography of conflicting politics. Whereas in the Commons and the Reich the Government and their favourite diplomats talk of Peace and Progress, the resounding bullets and zooming planes beyond the trenches tell the painful sides of the political hoodwink. World wants peace, international understanding and yet the absolute negation of promises is constantly becoming the headlines of the news today. The League looks on; the people look on and we crane our necks with eyes bulging out of their sockets, to discern amidst the thick battery smoke at the horizon, a cauldron of trouble sizzling with the blood of humanity. The fatherland first and to dogs the rest of it. What an irony? But we call this politics.

Away from the hobbies, away from the din of surprise raids, away from the warring activities, there exists another world, the world of arts supposed to exist for applying the balm to gaping wounds, for supplying the relieving part to the unconcerned individual; to create a universal brotherhood, a world removed quite from the turmoil of national cut-throats. This is the sphere of cinema.

But here also we find the political motives being used as a background to blackmail the other nations. Germany speaks of its own glories and runs down the French; France retaliates in a like manner by painting the Germans black; the Nazis propagate against the Communists and the Leninites spare no efforts to filmise the ills the Fascism. The vicious warfare goes on; this mud splashing may be justified, have some justifying factor. The most painful and the most unfortunate point in the sad tale is that Poor India is being vilely represented. Where does she come in the picture of national strife? And yet, without any rhyme or reason, her traditions, her ancient history, her customs are being freely lanced and exposed to the universal mockery.


What have we done, we cry. But the Lives of Bengal Lancerls, Clive of India, The Drum and now Ganga Din keep on telling with what ruthless injustice and with what cruel disregard we are being represented before the whole world. They come and we protest, but the ink hardly dries on the first ban when another picture pops up to disturb this peaceful isle of ours.

Is it the shifting of the revenge from the Wolf to the Lamb? How unnatural? Elevating your own civilization? What a method just to tease us— what a grim humour. Thrusting your own moral code upon us— we can appreciate none of them. And in the midst of this open blackmail, they have yet the cheek to exclaim "The white man's burden!" What a burden? This is politics through the films.
Indians are painted worse than dogs, our culture is exposed to ruthless mockery, our national prestige is handled with brutal disrespect. It is time we all rise as one man against the scandalous and defamatory attempts of the foreign producer.
Our friends the Westerners may know that we are no longer the silly boobs of the mid-victorian. We can understand their ways and motives. They perhaps forget that when the Oriental culture was at its heights, when we had well advanced in our conception of life, love and politics, when we were telling the world the paths to real progress and were educating them in the ways of living, the other side of the globe consisted of barbarians living in jungles, crawling on their feet like the human animals of Africa. We have only to turn over a random page in the history of the west, to find the father killing the son, the son riding through the blood of his parents, brothers killing their own kind: we have the material to reply to their blackmail. But no we know that time and tide knows no partiality. It is only the change of order. The inferior of to-day may be superior of tomorrow.

We are a liberal-minded race.  Although 'Crusade' contained much that could be called objectionable and haunting, we gave it a rousing reception. But we cannot stand this perpetual onslaught on our traditions and culture. We can no longer tolerate the pernicious propaganda. You try to glorify your own self, you are welcome to it, but why with a false contrast. Cinema Industry is a business and an art and the etiquette of both don't permit the use of such shameless weapons. India is a very big market and has for so long been yielding quite a rich harvest from its box-office windows. The Drum, Clive of India,Gunga Din—What a reward for our ungrudging support. But, we are afraid that now with your attitude towards us unchanged we will have to withdraw our support and cooperation. It may not be forgotten that Cinema. Art is an entertainment. You sell a two-hour recreation, we buy it. But we don't see how you can expect us, or as a matter of that anybody, to see anything insulting to his individual honour and self-respect. We say is it not injustice, is it not disgraceful?

The cry, however, has already gone up against all such films which hurt our sentiments which tramples on our tender corns. But if even now they don't listen to our protests, if they don't stop this disgrace to a country India, we'll have to resort a countrywide campaign of a complete boycott of foreign pictures. The ban on Drum and Gunga Din ought, however, to give them an object lesson.

We are sure that our leaders and the provincial Governments will cooperate with us in a national cause and will save our ancient tradition and culture from the cruel disregard and studied insult of the foreigners.

Indians are painted worse than dogs, our culture is exposed to ruthless mockery, our national prestige is handled with brutal disrespect. It is time we all rise as one man against the scandalous and defamatory attempts of the foreign producer.

Why shouldn't they respect us when we respect them?

This article was published in Cine Herald. The images used are from the original article.
452 views