Crime in the city is on the increase. There is one particular Gang that has terrorized the city. Dacoities-thefts-bootlegging is the order of the day. Police is helpless as they can not find the identity of the person who controls the gang. They succeed in arresting many of the gang men but even from them, they are able to find nothing for the simple reason that the men arrested also do not know their leader.

The Police Chief finally hits upon a plan that might succeed in apprehending the gangster, known to his people only as a Voice. The plan requires to plant one of his men in the gang and for this, he selects RAJAN - an Inspector of C. I. D., who is not only a very fine Police Officer but also very trustworthy and son of a late Colleague of the present Police Chief. Rajan is given the job and also sworn to secrecy.

That night Rajan, in the discharge of his duty, commits his first crime by asking for and accepting the bribe and is caught, as per plan and suspended. The news of his suspension reaches his home. Mother, wife, sister, even his two children - a boy of 8 and a girl of 6 are shocked. Rajan is asked why did he have to do it. Rajan could not reply.

Rajan follows up his first crime with a bigger one. He commits decoity at Seth Karorimal's place to prove his worth to the gangster. He is arrested, put in the lockup. He manages to run away from the lockup, of course with the help of his Chief — and is admitted in the gang as 2nd. Lieutenant. 1st being Durjansingh who also manages the Night Club Elite as cover for the gang activities. Rajan's mother has closed the doors of the house to Rajan. She refuses any help from him or even to do anything with him. She even tells him not to come to the marriage ceremony of his sister which is shortly to take place, as the mother is anxious to get her daughter married before the news of Rajan turning bad reaches the village where the in-laws of sister live.

Rajan's mother, having disposed off all the household belongings in order to get her daughter married, is finding it hard to keep the wolf of hunger away from the house. The children are hungry as they have not eaten since the previous day. Rajan who is also keeping a watch on his house, is unable to bear this and manages to go to his children in the night, wakes them up, and is feeding them when the mother enters and asks the children to throw away the food brought by Rajan. She tells Rajan that she would prefer to see the children rather die than eat food bought with the money tinted with the miseries of the victims of Rajan's crime. She even throws money, which Rajan had sent to his wife, in his face. telling him to take the blood money and get out and never to return again. Rajan's determination at this points fails him. He is unable to watch his children starve, his family ruined. He rushes to his Chief and tells him that he is unable to go on and that he may be recalled The Chief refuses telling him not to forget that all children are his children and that as a Police Officer. How it all ends .. SEE AKELA. 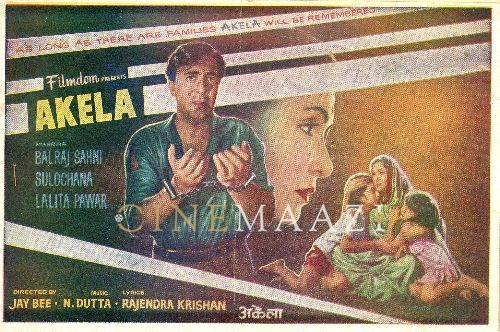