It was the midnight of..........and as the gong of the jail nearby peeled out its twelve grim notes, I was awakened to the fact that young poet Shekhar, the idol of millions, was to meet his death on the gallows in 6 hours! I found it hard to believe that Shekhar, the finest of men I had met in the 40 years of my medical practice, could have been guilty of murder of his wife. And somehow the evidence suggested that the girl Dr. Sandhya was the motive of the murder. Well, Sandhya is a pretty girl looking girl and her life did seem much complicated, but I could not exactly understand how far she was involved in the conflict between Shekhar and his poor wife Rajani - besides, I hate to believe anything against Sandhya. she is so much like a lily, so pure, so innocent!

I heard a sob in the ladies' ward and found that Dr. Sandhya was walking through the long corridors of my hospital to her quarters. I followed her, unnoticed. She went to the cupboard and as she reacehd for the bottle of poison, I interrupted her and made her to tell me her story, since that might relax the tension on her mind.

She soon fell into a reverie, as I have often noticed mental patients doing, breaking down when once their attempt at suicide is frustrated. She told me in her picturesque way how she came to know Shekhar at her hilly village. In fact he passing in a car and he had trouble with the engine. Sandhya, who had gone along with her bunch of village maids to fetch water from the pool on the ourskirts of the village, noticed his plight  and offered him pitcher of water, it that might  help. It did help and the car started and girls got into the car and as Shekhar left them one by one to their respective houses, Sandhya's being the last one, Shekhar met Mohan, his college friend who happened to be Sandhya's brother. Mohan induced Shekhar to break his journey and Shekhar spent four happy days with them. Days that could never be forgotten by Sandhya, for they brought her nearer and nearer to Shekhar every moment.

Sandhya's mother had fixed up another groom forher and noticing the growing intimacy between her daughter and the stranger, she dropped a hint to that effect and thus shattered the tender dream that was weaving itself around Sandhya and Shekhar.

Shekhar walked out of Sandhya's life and Sandhya was left utterly helpless and desolate, But luckily for her ther proposed bridegroom declined to marry her, for he had heard rumours of her going around and about with a stranger from the town. Mohan cheered Sandhya and rushed up to the place where Shekhar had travelled to only to find that Shekhar in his desperation had married Rajani, the girl who had danced to his poetry and who was madly in love with him for many years.

For Sandhya, life from then on was one long night of separation , bleak and heart-rending. Mohan, her brother, took her to Bombay where his friend Dr. Kailash was their host. Kailash was an admirer of Shekhar's writings and Sandhya found a book on his table, called "Birha-ki-Raat" dedicated to "someone" with a message "if you wish to heal the wounds of your heart, try to heal the wounds of others". This message brought a new meaning of life to her  and Sandhya resloved to become a doctor.

Years of study and hard work resulted in making her a full-fledged doctor. Kailash wrote to me, (I was once his professor) and I took her up in my country hospital as the chief lady doctor. The very first case that came to her was of Shekhar's child and never knowing that Shekhar resided in my town, she was mightly embarrassed on encouraging him. She did not tell me then, but now I can see what must have been passing in her mind when she announced her decision to leave the job within an hour  of her accepting it. I somehow persuaded her to stay on, telling her that the best way tosolve a problem was to face it, rather than run away from it.

And she stayed on, everyday going to Shekhar's house and attending to her little patient. Shekhar kept out of her sight, trying to making easier for her. But one day, to please the whim of her child patient, who, by the way,had got very fond of her doctor, Sandhya had to sing one of Shekhar's songs from his book. While she was herself moved to tears, Shekhar who had been overhearing, could not restrain himself from rushing to her and taking her close to his heart. Just then Rajani returned from her journey to find them in this compromising attitude. Jealousy planted itsef then and there,with roots so deep that nothing could convince her of the genuineness of the struggle that lay at the back of their lives, and which they had so far tried to overpower. She loved her husband too well to admit of any other theory.

What followed then is a story of three tormented souls - each fighting against the turbulent stream of human passions in which they found themselves. Sandhya's leaving the town with a resolve not to return, the child's illness which reached its climax because Rajani would not allow Sandhya to be brought back to save the patient. Shekhar's irritability and the last fatal boating  trip in Rajani was drowned and Shekhar was saved - all these factors leading to the suspicion of murder - can be attributed only to Rajani's jealousy for Sandhya and love for Shekhar.

Even now as I look at the clock striking 4, I wonder if God is in His Heaven and even if he is, whether he can save this innocent young man from the gallows! 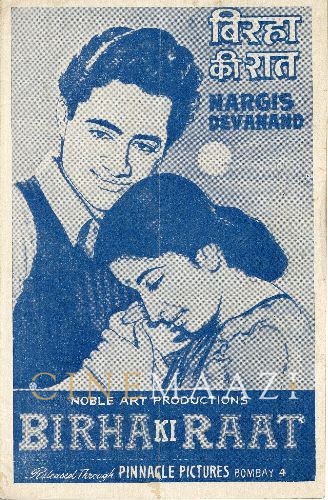