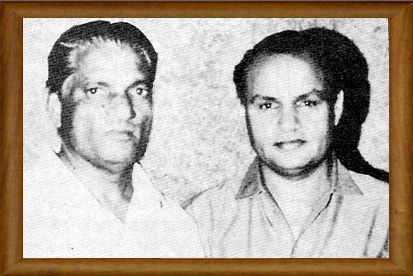 A non-film song was composed by the Hindi film industry’s first musician-duo Husan Lal Bhagat Ram in a record 24 hours, after the sad demise of Mahatma Gandhi. Young Mohammad Rafi became a celebrity overnight by rendering these lyrics penned by Rajinder Krishan. More than a million copies of a set of two 78 rpm discs were sold within a month. Such was the magic of the duo’s spell-binding compositions on the listeners. Their work together captured almost every possible genre and mood ranging from romantic, sad, frivolous, devotional, patriotic, qawwali and ghazal, etc. They popularised Punjabi folk music as an art form, with the range of music that has a rare lilt and rhythm but is yet soulful and poignant. Husan Lal Bhagat Ram became the most sought-after composer duo with the success of films like Pyar Ki Jeet (1948) and Badi Bahen (1949).

Pandit Husn Lal was an accomplished violinist and a renowned classical singer while his brother Bhagat Ram was an ace harmonium player. They were the first Hindi film music directors to work as a duo and went by the name of Husan Lal Bhagat Ram. Incidentally, Bhagat Ram was the elder of the two brothers. The duo was fond of a fast pace, which was actualized mainly through dholak and employment of atonal drums. The essence of their style was that the rhythmic pulse was quickly, unambiguously, and immediately established. Another aspect of their composing style was that they made a musical statement that consisted of successive song-lines with descending and repetitive tonal contours, which appeared to resolve the melody into completeness.

Bhagat Ram Sharma was born in 1914 and Pandit Husan Lal was born on April 8, 1920. Both were born in Village Kahma, Jalandhar district, Punjab. They were initiated into music by their father, the late Devi Chand, and elder brother Pandit Amar Nath. Later they became the disciples of Sangeet Maha Mahopadhyaya Pandit Dilip Chandra Vedi. Husan Lal’s first passion was playing the violin and he learned further under Ustad Bashir Khan. He was a performer par excellence in Khyal, Thumri, Dadra, Gazal, and Bhajan. He had a voice range of three octaves and was an accomplished master of complicated patterns of Taans, like his Guru Vedi Ji.

During 1939-40, Bhagat Ram had composed music for eight films either solo or sharing credit with composers like Ramgopal Pande and Madhulal Master. His repertoire included Bahadur Ramesh, Bhedi Kumar (1939), Chashmawali (1939), Deepak Mahal (1940), Hamara Desh, Hatimtai Ki Beti (1940), Sandesha (1940) and Tatar Ka Chor. None of these films met with much success and he had to wait for some years before tasting success with his younger brother Husan Lal. The tunes for the duo were most of the time composed by Husan Lal and Bhagat Ram provided mostly the beat only as a tabla player. There was complete unison between the two and their beat fascinated the connoisseurs of good music.

Husan Lal and Bhagat Ram made their debut as music composers with Prabhat Film Company’s Chand (1944), directed by D.D. Kashyap. They composed songs of different genres that depicted romance, happiness, sorrow, etc. The song 'Do Dilon Ko Yeh Duniya' sung by Manju, was their first hit. In subsequent ventures, they developed a liking for the highly emotional voice of Suraiya. They made their debut at a time when Hindi film music was in its infancy. They introduced lilting and foot-tapping Punjabi music to the Hindi music scene which paved the way for other music directors like O. P. Nayyar and Laxmikant Pyarelal.

Following the success of Chand, Prabhat commissioned the duo again to compose the music of Hum Ek Hain (1946). It also featured Husan Lal’s voice as co-singer with Amir Bai Karnataki. The songs of this film were in a template similar to the ones from Chand, a style that would soon develop into an easily identifiable Husan Lal Bhagat Ram style. They continued to get a small number of assignments in the following years. However, with the release of Pyar Ki Jeet (1948), they truly came into their own and began their rapid ascent in the film industry. Suraiya’s ‘Tere Nainon Ne Chori Kiya’, ‘O Door Jane Wale’, and Rafi’s ‘Ik Dil Ke Tukde Hazaar Hue’ from this film became immensely popular and are remembered even to this day.

Badi Behan (1949) was a classic film in the history of Indian cine music. Besides the most popular song, ‘Chup Chup Khade Ho..’ sung by Lata Mangeshkar and Premlata, the soundtrack was studded with numerous other gems by Suraiya and Lata. The songs of Badi Behan were a regular fixture at Radio Ceylon’s Puraani Filmon Ke Geet show for years. In 1949, they had composed music for 10 films and most of the films were musical hits. The following year, they created music for 9 musical hit films.

Their soulful music has the power to drive you to tears. Who can forget their music in films like Chand, Pyar Ki Jeet, Balam (1949), Badi Behan, Meena Bazaar (1950), Afsana (1951), Ansoo (1953), Shama Parwana (1954), Shaheed Bhagat Singh (1963) and Adl-e-Jehangir (1955). Their style was ‘bright’, even for sad songs as is evident in their melodic phrasing and choice of instruments and orchestration in their compositions. They were often accused of being repetitive in their approach, not credited with much innovation or path-breaking approach, but they served a kind of historical role.

After the dizzying heights they reached in 1949-50, success slowly started eluding them. Despite good soundtracks like Afsana (1951), Ansoo (1953), Shama Parwana (1954), and Adl-e-Jehangir  (1955), they had to remain content with a handful of films with B-list producers. However, director D.D. Kashyap went on to use their service in six films over a span of 12 years. Towards the 60s, they had to be content with a handful of C-grade films like Tarzan & Circus (1965) and Sher Afghan (1966).

Apart from scoring melodious compositions for Hindi films, they ventured into Punjabi cinema with G.D. Talwar’s film Shah Ji (1954). In this film, Pandit Ji got a gem ‘Jad Raat… Hanjuaan De Tel Vich…’ recorded in the voice of Lata Mangeshkar. Shah Ji was an average film and it bombed at the box office. The music duo who emerged when the Punjabi school of rhythm-based music had gained a foothold in the Hindi film industry, failed to make much impact on the Punjabi filmmakers.

After a decade, Raj Kumar Kohli gave them a chance to score the music of Main Jatti Punjab Di (1964). They exploited this opportunity to the fullest with their brand of simple, hummable tunes embellished with pacey rhythm. All the songs of this film especially the title number ‘Main Jatti Punjab Di Meri Hirni De Waang..’ became popular. The film, with a powerful star cast including Prem Nath, Nishi, Jeevan, Madan Puri, Manmohan Krishna, Kharaiti Bhainga and Achla Sachdev, was a box office hit. Encouraged by the success of this film, they were roped in by the producer Abdul Gafoor Khetriwala to score music for Sapni (1965). The musician duo Husan Lal Bhagat Ram scored a bouquet of melodious compositions like ‘Bin Khambaan De..’, Chhado Rast Ke Chali..’, ‘Lai Chal Naal Sapere..’, ‘Chann Chadhiya.., ‘Ranjha Ranjha Kehandi..’ and ‘Sun Sapniye..’. The film proved a musical bonanza for the audience.

Their most lasting partnership was with lyricist Qamar Jalalabadi - from their first film Chand (1944) to Shaheed Bhagat Singh (1963), they created close to 160 songs in 24 films. The other prominent lyricists they worked with include Aarzoo Lucknawi, Rajinder Krishan, J. Nakshab, Sarshar Sailani, Mulkraj Bhakri, and Majrooh Sultanpuri. They trained famous music director Shankar, Khayyam and singer Mahendra Kapoor.

They worked with famous singers like Zeenat Begum, Ameerbai Karnataki, Suraiya, Shamshad Begum, Zohrabai Ambala, Lata Mangeshkar, Geeta Dutt, Asha Bhosle, and Suman Kalyanpur. Suraiya lent her voice to around 58 songs composed by Husan Lal Bhagat Ram for 9 films. Surinder Kaur, known as the nightingale of Punjab, called Pandit Husan Lal the soul of Punjab’s country music. Among male singers, they did the most work with Mohammed Rafi, followed by G. M Durrani, Talat Mahmood, Mukesh, Manna Dey and Kishore Kumar. They even made Khayyam sing a duet with Zohrabai Ambala in Romeo & Juliet (1946). Towards the end of their career, they roped in Purushottam Das Jalota for a song in Shaheed Bhagat Singh (1963).

Mohammed Rafi had immense reverence for Pandit Husan Lal. Rafi used to visit the residence of Pandit Husan Lal along with his tanpura to rehearse the raga to be used in the song sometimes at four in the morning while Lata used to practice at the sound recording studio. Husan Lal personally taught Lata Mangeshkar for six years. He had developed an unconventional style of playing violin and used it for making the interludes more intricate and emotional. The maestro with a sobbing violin matched the melody in the voice of Lata. Such an intimate relationship between the tutor and the taught created hundreds of memorable melodies. The quality of a diamond cutter in master violinist Husan Lal can be visualized through immortal melodies of Lata in ‘Chale Jana Nahin' and 'Jo Dil Mein Khushi Ban Kar Aaye'. Husan Lal Bhagat Ram’s contribution cannot be overestimated in honing Lata’s talent.

The indifferent attitude of the film industry broke the heart of Pandit Husan Lal. He then packed up and left for Delhi. Husan Lal’s father in law was an influential person, and with his help, he settled in Delhi and started teaching music to aspirants. He performed as a violinist on All India Radio and at other renowned music festivals and concerts. Pandit Bhagat Ram stayed back in Bombay and played drum instruments in the orchestras of other music directors.

On December 28, 1968, when Pandit Husan Lal went out for his routine morning walk, he had a cardiac arrest and died before reaching Willingdon Hospital, New Delhi.