In Indo-China the Annamites are struggling to gain their independence from French colonial rule.

Dashing ruthless Colonel FLAMBAU of the French Foreign Legion in Saigon captures idealist Dr. VANHUE unbending Annamite Nationalist Leader, and finds on him a chit with the words-"Nine o'clock Chocolate.'

Dr. VanHue contemptuously refuses to explain its meaning. Captain ORLOFFSKY, another Foreign Legion officer, tells the Colonel that there is a cabaret called 'CHOCOLATE' in Saigons probably Dr. VanHue was to meet somebody there at nine o'clock.
Flambeau and Orloflsky visit the cabaret PROFESSOR TALWAR, an Indian magician and juggler, performs funny tricks on the stage. After him an Indian singer and dancer, charming VEENA DEVI, enchants the public whose darling she is. Colonel Flambeau thinks she is as clever as she is beautiful. On his command Mr. GUPTA, money grabbing owner of the cabaret, persuades Veena Devi to join the Colonel in his box. Flambeau asks her to see him next day in his office for secret talk.

As Veena goes up to her dressing room, Talwar, in love with her, reproaches her showing herself in the Colonel's box. She tells him it was on official business the Colonel has arrested somebody and wants some information from her. The lovers' talk is overhead by a CLOWN also employed in the cabaret as a trick cyclist.

Next day Veena Devi accompanied by her AYAH visits Flambeau's office. He asks her to watch cabaret for Nationalist activities. First she refuses to act as his spy but as he shows her Dr. VanHue in his cell to find out whether she has seen him before, she is overcome with pity and anger. Ostensibly she agrees to the Colonel's proposition with the mental reservation to contact the Nationalists and liberate the prisoner. She refuses money which the Colonel presses on her but the ayah stuffs the money into Veena's bag. Talwar, watching from a bush outside, see this and concludes that Veena has been bought over by the French Colonel. In the cabaret there is an angry scene between Talwar and Veena. He throws the money in her face. Later he mocks the Colonel again in his box with a taunting song from the stage.

Flambeau is so engaged that he comes to arrest Talwar. An exciting due ensure between Talwar's Indian prop sword and the Colonel's sabre. Talwar's weapon is knocked out of his hand and the Colonel's sword point already tickles his ribs when an almost miraculous surprise saves Talwar ands he escapes on his motorcycle. Flambeau and French soldiers in jeeps pursue him out of Saigon. In the breath taking chase he leads them unwittingly to an Annamite Guerilla outpost. After an embittered night skirmish the French have to withdraw.

Next morning the Annamites take Talwar prisoner believing him to be spy and decoy of the French. He is saved by ZUAN, a scarfaced Annamite leader who vouches for him and assists him in getting hold of Flambeau and making him sign a release order for Dr. Van Hue.

In prison Talwar dumbfounds flabbergasted sentries with his magic tricks and establishes contact with Dr. Vane Hue from cell to cell in a manner hardly ever seen in any prison before.

The hardbitten Colonel finds himself affected by Veena's beauty and tells her he is in love with her. When Veena is alone in her dressing room, the Clown comes, reveals his true identity in a dramatic scene and tells Veena that the only way to get Dr. Van-Hue & Talwar out of prison is to renew the attempt of kidnapping the Colonel. Veena agrees reluctantly to include Flambeau to go with her on a lonely morning ride on horseback.

On that ride they are ambushed by Annamite Guerillas. Colonel Flambeau is overpowered and taken on an old fort. In the face of death he refuses to sign the release order.

Will Venna Devi let the Annamites kill him?

Will she also fall in love with the Colonel and forsake Talwar. 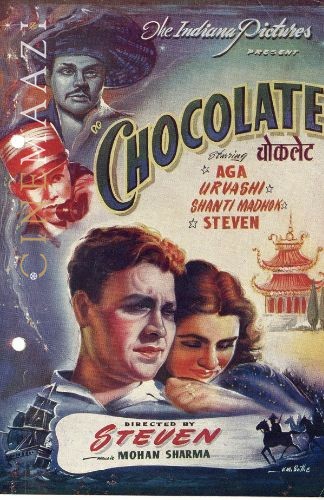