The village of Raidham, in Bengal, was founded by Raja Dhiresh Nath Roy, an aristocrat of good name and fame. His descendent Sita Nath Roy followed in the footsteps of the illustrious founder and was a man of strong will and character. Sita Nath Roy's son, Amar Nath had all the good qualities of his father but held progressive ideas. He was very democratic and socialistic and hated all kinds of caste distinctions and class prejudice. "Service to Humanity" was not only a motto but almost a religion with him, and with this laudable object in view, he started the study of Medicine.

Amar Nath took his degree in medicine and returned home. He brought with him a large number of cholera vaccines and medicines, for only a year ago this scourage had taken a heavy toll in his village. When he reached the village he found it, once again, in the grip of this terrible epidemic. A large crowd had gathered together and were offering 'prasad' to Olai Devi, the Cholera Goddess.

Maya, a village-girl, whose father lay dying, was not permitted to take 'prasad' and 'amrit', just because her betrothed husband had deserted her on the matrimonial altar. Moved by pity, Amar Nath, removed her father to the Charitable Hospital. Amar Nath promised the dying man to take care of his daughter Maya. Rumours of this incident aroused the apprehensions of Sita Nath and he decided to get his son married as soon as possible. On being pressed by his father, Amar Nath replied that if he married at all, he would marry Maya. This led to a rupture between father and son, and Amar Nath left his father's place, after solemnly promising his father never to reveal his identity and parentage to the outside world, to serve humanity and protect Maya.

Amar Nath opened a small hospital, not far from his village and here Maya played the role of a dutiful wife and rendered every assistance to her husband and together they endeavoured to serve mankind.

One bright morning, Maya informed Amar Nath that they were going to be blessed with parental bliss. Her thoughts constantly dwelt on the prospects of a son who would be a replica of his noble father and the embodiment of all that is worthy and great.

The much-hoped-for-day arrived and a son was born to them, but alas! the mother was destined not to nurse the child and she passed away with her hopes and desires unfulfilled. Amar Nath was left alone in the world with this sacred trust of Maya.

After years of diligent search, Dayal, an old servant of Sita Nath, discovered the whereabouts of Amar Nath. He tried in vain to persuade Amar Nath to entrust the child to his care, but only on one condition that its identity would never be revealed.

In course of time this baby boy grew up to be the learned Doctor Som Nath. Amar Nath was closely following his career. He came to know when Som Nath was returning home after completing his studies abroad. He could not contain himself with joy. Amar Nath came to Calcutta to have a glimpse at his son and stayed with his friend Akshay Babu. He would regale Akshay Babu and his daughter Shibani, with details of the great and good deeds he expected this young doctor to perform in the service of his motherland. He did not disclose his relationship.

One day Amar Nath was shocked to hear that Som Nath had accepted a post in a laboratory. Amar Nath, in his sore disappointment, lost his balance and went straight to the laboratory and scolded Som Nath, particularly emphasizing the fact that real education was wasted on young men who confined their activities in the mere earning of a livelihood. When Amar Nath had gone, Som Nath thought over the matter and came to the conclusion that the old man was right in what he had said. He immediately set in search of the Old Doctor and was told to look for him in Akshay Babu's house, where he met Shibani. Youth called Youth, and it was a case of love at first sight.

On Amar Nath's advice, Som Nath decided to start a research laboratory and a pharmaceutical factory in Raidham.

Som Nath, enamoured of Shibani, took Dayal in his confidence and told him that he will marry Shibani. When questioned about her caste and creed, he retorted that such petty consideration did not weigh with him. How could an orthodox like Sita Nath bear to hear such remark? Sita Nath shouted at Dayal that such a retort could only come from a homeless waif. Som Nath overheard these words and so did Akshay Babu and both started worrying over the significance. Akshay Babu refused his daughter's hand to Som Nath and instead asked Som Nath, never to set foot in his house. Gradually this became such torture that one day Som Nath suddenly left his home. Dayal became apprehensive of Som Nath's lift and rushed to Amar Nath to obtain his permission for revealing the identity of Som Nath in order to save the situation, but Amat Nath was honour-bound by his promise of secrecy to his father.

What is the ultimate solution to his difficult problem? Would Amar Nath disclose his antecedents? Would Som Nath and Shibani be united? Come and set the finale on the screen. 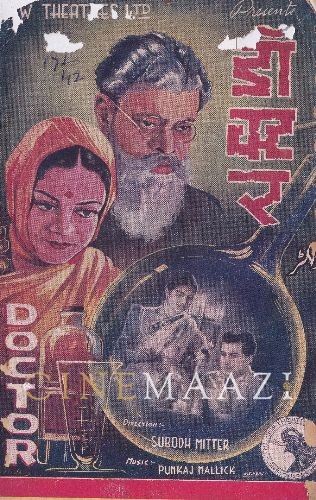