The Cow is the symbol of Hinduism. Not only because it gives milk but also because of its self-effacing qualities it is worshipped by every Hindu.

Punyakoti was a Cow par-excellence. Once while it was returning from forest after grazing, a tiger by name Arbhuta attacked it. The cow pleaded for just a few minutes freedom so that it may bid goodbye to its calf. The tiger obliged and was later surprised to find Punyakoti keep up its promise. Rather than eat such a sacred cow, the tiger chose to die.

Gowdajja the headman of Kalenahalli is believed to own this sacred breed of Cows, Punyakoti. His son, in fact, gave his life in saving a cow of this breed from a tiger's jaws. In the village now are two memorials, side by side, one for the legendary cow Punyakoti and the other for Gowdajja's son.

As the curtain opens, Gowdajja is facing a big problem.

The Gomala (free grazing ground for village cattle) where the memorials are located, is to be acquired by the Government for constructing a road. For Gowdajja and his dumb and widowed daughter-in-law (Taiba) the knocking down of the memorials would amount to their spiritual death. But they are helpless.

Old Gowdajja dies hoping that his grandson Nandan, who is in U.S. for advanced studies, would soon return and somehow solve the problem.

Nandan returns from U.S.  But the problem gets multiplied. In the first place the Government refuses to alter the road project. Instead it gives some Land to Nandan as compensation. He tries modern methods of farming here. But when he installs a pump set in the temple-pond, the village priest Venkatesh, who was also Nandan's boyhood friend, is enraged beyond words.

To make matters worse Nandan's American wife Lydia comes to Kalenahalli and resides in the ultra modern farm house built by Nandan. Though Taiba who is still in the old house, and Lydia do their best to understand and appreciate each other, the cultural gap between them is too great.

In the meanwhile word spreads that Lydia has eaten a cow belonging to Punyakoti breed. As retribution Nandan agrees to demolish the pump set he has installed. But now the gulf between the modern son and the orthodox mother is permanent. She takes back all the Punyakoti cows from the farm house and gifts them to Venkatesh before breathing her last.

On the day of her funeral Lydia gives birth to a child.

Now the story takes a different turn. The child cannot be breast-fed by the mother. An Ayah is arranged. But once when the Ayah is ill, the child is on the verge of death. A villager suggests that Punyakoti may feed the child. In fact that was how Nandan was fed while young. But Venkatesh refuses to lend the cow for this purpose. 'Let a beef-eater's child perish without milk' he says. Finally the villagers persuade Venkatesh to allow Punyakoti to feed the child direct from its udders and save the child.

This event brings about a change of heart in Nandan. His reverence for the sacred cow is rekindled. Venkatesh surrenders the Punyakoti cows to Nandan again, and also requests him to take back the old cows he had earlier sold to a slaughterer. Nandan consents and rushes to the slaughterer. But though he agrees to return the cows, it is of no use as neither Nandan can recognise his cows nor the cows Nandan.

Will the sacred "Godhuli", the dust raised by the feet of the cows, that purifies the skies of Indian Villages be ever vouch-safed to the present generation? 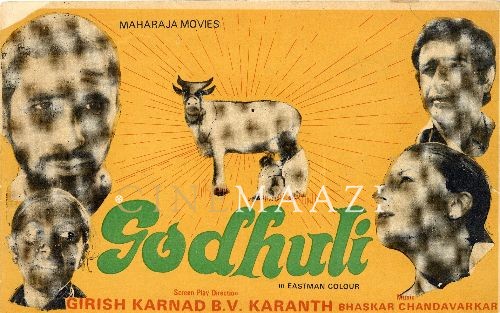