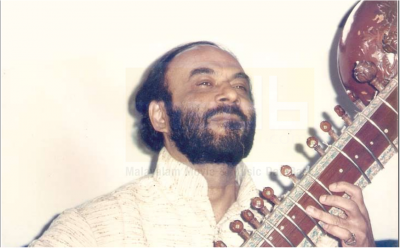 Music composer, sitar player and academician, Bhaskar Chandavarkar worked across film industries, scoring music for more than 40 films in different languages. Teaching Applied Music and serving as the resident music composer of FTII, Pune, he went on to compose music for many New Wave films in the 80s. His skill stands out in his compositions for films such as Girish Karnad's Ondanondu Kaladalli (1978), Mrinal Sen's Khandhar (1983), Aparna Sen's Paroma (1984), Vijaya Mehta's Rao Saheb (1986) and Sandeep Sawant's Shwaas (2004). He also created critically acclaimed scores for stage productions such as Vijay Tendulkar’s Ghashiram Kotwal directed by Jabbar Patel in 1972, as well as P L Deshpande's Teen Paishacha Tamasha. A multi-faceted talent, he was trained in sitar by greats like Pandit Ravi Shankar and Pandit Umashankar Misra, as well as in Hindustani vocal music, and contemporary western traditions. Among the honours he received were the Sangeet Natak Akademi award for his contribution to music, and the National Award for music direction in Kranti Kanade's Chaitra (2002).

Working at the Film and Television Institute of India, Pune from 1965 till 1980, he taught applied music and worked as a resident music composer. During the 1980s, he went on to compose music for several films belonging to the New Wave genre. Some of his memorable work is included in Girish Karnad's Ondanondu Kaladalli (1978), Mrinal Sen's Khandhar (1983), Aparna Sen's Paroma (1984), Vijaya Mehta's Rao Saheb (1986) and Sandeep Sawant's Shwaas (2004). Other works he was involved with include Sheshnag (1990), Thodasa Roomani Ho Jayen (1990) and Cheluvi (1992). In the course of his career, he worked with well-known filmmakers such Mrinal Sen, Girish Karnad, Aparna Sen, K G George and Amol Palekar in various languages such as Marathi, Hindi, Kannada, Malayalam, Bengali and Oriya. He was also known for his synthesis of Indian classical and western music.

Besides academics and film music, Chandavarkar also contributed to the world of performance art through his critically acclaimed compositions for Vijay Tendulkar's Ghashiram Kotwal directed by Jabbar Patel (1972) and P. L. Deshpande's Teen Paishacha Tamasha. Chandavarkar was also involved with the Sangeet Natak Akademi's Executive Board as well as various music related initiatives and projects undertaken by them.

He was honoured by the Sangeet Natak Akademi in 1988 in recognition of his contribution to music. Among the other honours that came his way, in 2002, he was awarded the National Award for music direction for Kranti Kanade's Chaitra (2002).

Bhaskar Chandavarkar passed away on 26 July, 2009. He was survived by his wife, Meena, director of New India School, and son Rohit. His multi-volume autobiography The Yard Went on Forever was published in 2008. Bhaskar Chandavarkar remains memorable for the robust archive of musical compositions and academic trails left behind.