So long as Dreamers dream... So long as lovers love.... the story of the immoral love of Heer-Ranjha will be remembered!

As luck would have it, a girl named Heer from the very family of Kaidu fell madly in love with Ranjha from the other village. Kaidu came to know of this romance and managed to send Ranjha away to Ranghpur on a false errand and got him severely beaten.

In the meanwhile, Saida who had defeated Ranjha in a sword duel in the presence of the king to win the hand of Heer, came with a barat for the marriage ceremony.

Heer writhing in pain at the thought of separation from her beloved Ranjha, prayed to God for help. Ranjha, who had managed to escape, reached Heer's house, as if in response to her prayers, and tried to take her away. Kaidu however intercepted Ranjha and would have killed him, had he not been fortunately saved in time by Heer's cows who made a mad rush on the scene.

Heer ultimately was married to Saida and was taken away to Rangpur. She, however, resisted the bridegroom's love and overtures and for her defiance was thrown into a dungeon and allowed to starve.

Frustrated in love, Ranjha wandered from one jungle to another, till he finally met a Jogi known as Balanath. On seeing the sincerity and intensity of Ranjha's love for Heer, the Jogi blessed him and asked him to go to the abode of his beloved.

Ranjha called at the doors of Heer. His voice was soon recognised by Heer, who by that time had become almost insane due to the brutal treatment meted out to her at the hands of Saida and his mother. Saidu's sister took Ranjha for some loafer and he was driven out.

Saida's sister, who herself was a victim of frustrated love, soon learnt the truth about the Jogi and injustice done to Heer. She consequently, helped Heer to escape with Ranjha.

Saida became furious at this incident and succeeded in locating Heer and Ranjha in desert. Saida and his friends came rushing with lathis and exes but the timely arrival of the custodians of law and order of the place saved Ranjha from certain death. They were marched to the court of the Raja for hearing their statement, and ultimately Ranjha was imprisoned for the crime of running away with a married woman.

Utterly despaired, Heer sang a song to invoke divine help and as a result the entire town was set on fire. The Raja was stupefied and bowed before Almighty's judgment and blessed Heer and Ranjha. He also sent this personal message to the people of Jhang Syal and the parents of Heer, that the enmity between the people of two villages be forgotten and Heer and Ranjha be united in wedlock.

Would the people of the two villages heed the Raja's message? Would Destiny lead Heer and Ranjha to the threshold of marriage? See this heartwarming drama on the silver screen. 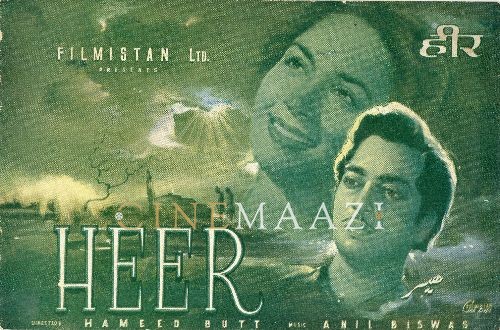