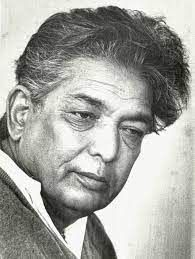 One of India’s most renowned poets of the 20th century and a noted lyricist whose work enthrals in some of Hindi cinema’s most acclaimed films, Kaif Azmi was a romantic revolutionary, who left his imprint with his intense, emotional verses. Resolute in his belief in poetry as an instrument for social change, he wrote several Urdu language poems against communalism, religious fundamentalism and for the rights of women, as seen in Aurat, Makaan, Daaera, Saanp and Bahuroopni. His cinematic work impresses with its simplicity, optimism and grace. Some of his best film songs are from films like Kaagaz Ke Phool (1959),Shama (1961), Shola Aur Shabnam (1961), Anupama (1966), Aakhri Khat(1966), Haqeeqat (1964), Hanste Zakhm (1973), Arth (1982) and Razia Sultan (1983). He also holds the rare distinction of writing Chetan Anand’s film Heer Ranjha (1970) entirely in verse, thus creating history in dialogue writing. Winning the National Award and Filmfare Award for the screenplay and dialogue of M.S. Sathyu’s Garm Hawa (1974), he is also the most awarded Urdu poet. Winner of the Padma Shri, the Sahitya Akademi Award & Fellowship, Soviet Land Nehru Award, and the Afro-Asian Writers Lotus Award among others, he was also honoured with Doctorates from many universities in India. An active member of the Progressive Writers Association (PWA), he was also the All India President of the Indian People Theatre Association (IPTA).

Born on 14 January, 1919, in Mijwan, Azamgarh district, United Provinces, British India into a zamindar family with a literary background, Kaifi Azmi was blessed with the gift of languages and a natural talent for writing. At the young age of 11, he wrote his first ghazal in Bahraich – Itna toh zindagi mein kisi ki khalal pade, which was later immortalised by Begum Akhtar. During the Quit India agitations in 1942, he abandoned his studies of Persian and Urdu, to become a full-fledged Marxist, becoming a card-holding member of the Communist Party of India. The leading progressive writers of Lucknow were impressed by his poetry and leadership qualities, and took him under their wing, so to speak. Azmi went on to become a member of the Progressive Writers' Movement of India, garnering acclaim as a poet. Aged 19, he started writing for the CPI’s paper, Qaumi Jung and moved to Bombay.

He made his Hindi film debut as lyricist for the film Buzdil (1952) directed by Shahid Lateef, writing Rote rote guzar gayi raat. Apparently, the break came his way courtesy the intervention of famous Urdu writer Ismat Chughtai, who was the wife of the director. Chughtai, a prominent member of the Progressive Writers Association, was aware of Azmi’s gift for writing, and also of the fact that he received just Rs.40 a month from the Communist Party of India for writing for their paper as well as working at the grassroots with mazdoor kisan unions. With a baby on the way—Azmi’s wife Shaukat was expecting daughter Shabana Azmiat the time—Ismat Chughtai realised Kaifi could do with some additional income. She requested her husband Shahid Lateef to sign on Kaifi, who was a popular poet, felicitated at mushairas for his passionate, socially relevant poetry. When Kaifi expressed his apprehensions as he had no previous experience in writing film lyrics, Lateef convinced him to come on board, with the remuneration paid directly to Shaukat Azmi.

Kaifi went on to write a series of films for Nanubhai Vakil and a few others. While they didn’t achieve fame, they helped support the Azmi family—which now included son Ahmer, later to become famous as cinematographer Baba Azmi. It was with Guru Dutt’s Kaagaz Ke Phool (1959) that Kaifi truly won acclaim as a lyricist. The songs were a huge hit; unfortunately, the film failed at the box office only to emerge as a world cinema cult classic in the 1980s. Incidentally, Kaifi and SD Burman had created the timeless Waqt ne kiya, kya haseen sitam but apparently there was no situation for the song in the film. However, Guru Dutt loved the song so much that he created a place for it later.
With tongue firmly in cheek, Kaifi had described the business of writing songs in films as a strange process, revealing that often the tune would be composed first and the words fitted in later. He likened the activity to first digging a grave and then finding a corpse to fit it—naturally it was rarely a perfect fit. In his case though, he joked, the directors were satisfied that he could bury corpses competently!

In Ramesh Saigal’s Shola Aur Shabnam (1961), the situation was repeated as all the songs became popular, in particular Jaane kya dhoondte rehti hain and Jeet hi lenge baazi hum tum ; however, the film’s lacklustre performance at the box office tempered the songs’ success. The same fate had befallen Ek Ke Baad Ek (1960), and Apna Haath Jagganath (1960). Though helped by the success of Shama (1961), Kaifi had been dubbed unlucky and the offers had reduced to a trickle.

The situation changed when Chetan Anand offered him Haqeeqat (1964). Anand refused to take seriously Azmi’s claims of not being favoured by the stars, countering that the same was said of him as well! They collaborated to create a film that became a landmark for both. While Kar chale hum fida remains one of the finest patriotic songs to date, Main yeh sochkar uske dar se utha tha became a paen to unrequited love.

Collaborating with Chetan Anand and Madan Mohan, Kaifi created such memorable songs as Tum jo mil gaye ho rendered impeccably by Mohammed Rafi, as they went on to create such memorable and unique films in Hindi cinema like Heer Ranjha (1970), Hanste Zakhm (1973), and Hindustan Ki Kasam(1973). Heer Ranjha, in particular, was the jewel in Azmi’s crown, so to speak, as he not only wrote the songs but the entire script in verse, thus creating an all-time record. The exertion that the composing of this film demanded extracted a high toll on Kaifi’s health. Suffering from high blood pressure and popping anti-sleeping pills to complete this mammoth project could well have played a role in the brain haemorrhage he suffered on 8 February, 1972, rendering his left leg and left hand incapacitated for life.

Kaifi went on to dedicate his life to the uplift of his birthplace Mijwan, the tiny village in Azamgarh which was his birth place. Within a span of 20 years, he transformed it into a model village, setting up an NGO Mijwan Welfare Society that runs a Higher Secondary School for girls, Inter-College for girls, Computer Training Centre, and Embroidery and Sewing Centre for Women.

Azmi won critical accolades for the script, dialogues and lyrics of M.S. Sathyu's Garm Hawa (1973), based on a story by Ismat Chughtai. He also wrote the dialogues for Shyam Benegal's Manthan (1976) and Sathyu's Kanneshwara Rama (1977). Continuing his work as a lyricist, he accepted Mahesh Bhatt’s offer to compose the lyrics for Arth (1983), coming up with such gems as Tum itna jo muskura rahe ho and Koi yeh kaise bataye ke woh tanha kyon hai. He even played a key role in Saeed Mirza’s film Naseem (1995), essaying the grandfather who regales his granddaughter with stories of life marked by communal harmony in pre-Independence India, amidst the 1992 communal tension that climaxes in the destruction of the Babri mosque.

Kaifi’s last penned song was for the film Chand Grahan in 1997, which remains unreleased.

He passed away on May 10, 2002 at the age of 83. The government of India named the train from Delhi to Azamgarh Kaifiyaat Express in recognition of his contribution to society; Rabindranath Tagore with Geetanjali Express and Premchand with Godaan Express are the only other writers who have the honour of having a train named after their published work.