Jagathala Prathaban was based on a popular folk tale (12 Ministers’ Tale) of a  prince, who, through his various talents, wins over several girls and marries them.  The film had some wonderful sets, trick shots, songs, and comedy scenes, which made it a “must watch” during that period.

A king (P.B. Rangachari) asks his three sons on their impressions about the shining moon and what they would like to do under it. The last son, Prathapan  (P.U. Chinnappa) expresses his desire that if given an opportunity, he would like to spend his life in the company of four angelic ladies: Indrani (Sarojini),  Nagakumari (Jeevaratnam), Agnikumari (Varalakshmi), and Varunakumari  (Jayalakshmi), princesses of Indraloka, Nagaloka, Agniloka, and Varunaloka respectively!  The king gets angry with his desire, saying it is not befitting a prince and asks his son to withdraw the statement.

However, Prathapan, known for expressing his views honestly, refuses to retract his statement. The king orders that if he does not seek an apology, he would be killed the next day. Prathapan’s mother advises him to leave the kingdom immediately to save his life.  Though Prathapan refuses to run away like a coward, saying he did nothing wrong, he leaves the kingdom as per his mother’s plea. He prays to the Goddess and seeks her blessings before leaving the palace.

At the same time,  four angels (Indrakumari,  Nagakumari, Varunakumari, and Agnikumari) come to a pond to bathe; here,  they take a vow to marry the same man so that they can live together forever.  Meanwhile, Prathapan wanders from place to place and meets a friend  (N.S. Krishnan). The two are protected by the Divine Mother Avvai (Saradambal) and live in a hut created by her. Prathapan notices an angelic girl  Indrakumari (Sarojini) bathing in a pond and steals her sari.  Indrakumari, who cannot go back to her world without the sari, chases him to the hut. Avvai hides the sari and changes  Prathapan to an infant! The damsel who comes chasing him collects her sari and loves the child, who soon regains his normal appearance, and both fall in love. The two marry.

A  king, who is hunting with his minister (T.S. Balaiah), falls for  Indrakumari’s charms. In order to get her, the king appoints  Prathapan as his commander and takes them to his palace.  He sends Prathapan to Nagaloka and other challenging places to find the cure for his feigned sickness, with the hope that Prathapan will be killed, leaving his wife to the king. But Prathapan succeeds in all the ventures and returns with three more wives, one from each world, making four in all! By a clever ruse, he makes the king and minister believe they can enter fire unscathed. Thinking they will meet their forefathers and return, they enter the fire and are burnt to cinders.  He makes his friend the new king of that country, experiences many incredible adventures, and succeeds. When he finally settles down with the four angels,  he learns that his parents have been reduced to poverty,  so he helps them to regain their kingdom and makes his father the king again. 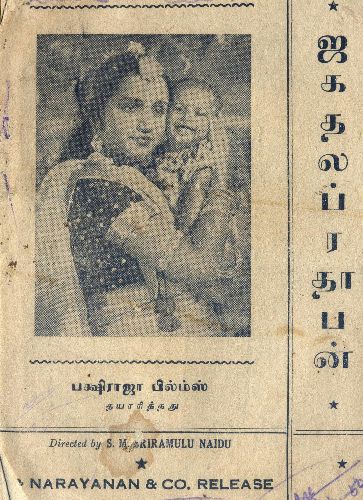