Ambalatharasan (MKT), a student in a gurukulam, is in love with his co-student  Amritavalli (S. Jayalakshmi), daughter of a rich zamindar Kalingaraya Prabhu.  When he expresses his love, she declines, stating that he is poor and she cannot spend her entire life with such a poor person. When both of them go to guard their guru’s crop and Ambalatharasan falls asleep, horses come and eat the crops, leaving him anguished.

Ambalatharasan, a good singer, sings in praise of Goddess Kaali and seeks her blessings. Pleased with his devotion, she appears and grants him the boon that whatever he prays for will come true. After the boon has been granted, he notices the horses again eating the crops. Angered, he curses a horse with his song and the horse dies. By that time, his guru returns and is shocked by the power of his words. Amritavalli, who is fond of the horse, requests  Ambalatharasan to bring it back to life. Ambalatharasan again sings, praying for its life and the horse comes back to life. Kalingaraya Prabhu, angered by this, stops all his support to the gurukulam and also takes his daughter away.  The power of Ambalatharasan’s words makes everyone address him as Poyyamozhi Pulavar and Sivakavi.

Though the entire world praises Ambalatharasan, a proud  Amritavalli does not believe in his powers; instead, she ridicules him. When Goddess  Kaali comes to Amritavalli in disguise, Amritavalli teases her. The angry Goddess punishes her by afflicting her with smallpox. The guru calls  Ambalatharasan, who sings in praise of the Goddess, and  Amritavalli gets cured.  As a reward, Kaligaraya Prabhu arranges for their marriage with Amritavalli’s consent. Her father gifts them much wealth,  which Sivakavi soon spends in philanthropic activities. Instigated by her friend, Amritavalli advises  Sivakavi to praise the king through poems instead of God and thus earn a living. He refuses, insisting that he would not praise anybody else other than Lord Shiva and Goddess Kaali. When a devotee of Lord  Muruga offers him 10,000 varahas (gold coins) to sing in praise of Lord Muruga, Sivakavi refuses, stating that his mouth, which has sung praises of the father (Lord Shiva), shall not sing in praise of the son (Lord Murugan). An angry Amritavalli orders her husband out of the house since he is unable to earn for his family.  Sivakavi leaves and leads a nomadic life. Lord Murugan  in disguise directs him to the court of king Vanangamudi  Pandian (P.B. Rangachari) to reinstate Tamil Sangam.

On the way, Sivakavi uses his unique power to give eyesight to some devotees and also earns money, which he deposits with daasis. Sivakavi meets the king and expresses his desire to reinstate Tamil Sangam. However, the king does not believe in his powers. Sivakavi then proves his powers by making the statue of a dead poet state that Sivakavi is one of the talented poets. Sivakavi proves his powers again by bringing out the throne submerged in the Madurai temple pond. The king is now convinced of Sivakavi’s powers and offers all help to organize the Tamil Sangam;  Sivakavi donates his earnings of 1,00,000 varahas for the meeting. He also becomes the President of Tamil Sangam there.  Sivakavi then lands in the Chola kingdom. With the help of the minister Cheenakar (Serukalathur Sama), he meets the king (R. Balasubramaniam), who is initially suspicious of  Sivakavi’s capabilities. Later, the king appreciates him and treats him with respect, which annoys the other poets in the court and also the king’s associates. The courtesan-poet Vanji (T.R. Rajakumari) has fears about losing her importance due to his arrival. When she and other poets argue on their superiority, the King orders them to come out with an epic within ten days. However, even after ten days, the poets are unable to complete it.  The King orders them to leave his court. Insulted, Vanji tries to seduce Sivakavi; when he doesn’t yield and rejects her advances, she makes him promise that to save her honour, he will not reveal what transpired between them to anyone. Taking undue advantage of his silence, Vanji goes to the king and accuses Sivakavi of molesting a woman the previous night. When the king interrogates him, Sivakavi states that he did meet a girl, but does not reveal any details about her (as promised by him). When the king asks again if he had met a girl, Sivakavi accepts that he met a  girl. When the king asks if he molested her, Sivakavi denies the charge. Vanji, however, states that if his meeting of a girl alone is true, then the charge of molestation is also true.  When the king asks for a witness to prove Sivakavi did not molest the girl he met, Sivakavi states that the moon is the only witness to his innocence, so nobody believes him.  Having no other choice, he requests the moon to come;  the moon appears and confirms he was a witness to their meeting, and that Sivakavi did nothing improper and is pure. So Sivakavi is exonerated. Minister Cheenakar and Sivakavi become close friends and share several thoughts on life.

Once on a rainy day, during a chat with Cheenakar in his bedroom, Sivakavi gets tired and falls asleep on his bed.  Cheenakar does not disturb him and spends some time in his balcony. Cheenakar’s wife Malli (M.S. Thirupurambal) comes to the bedroom to sleep, does not notice Sivakavi, and sleeps next to him. Soon, Cheenakar comes back. Despite Sivakavi getting up and wanting to leave (noticing Malli sleeping next to him), Cheenakar forces him to remain and sleeps next to him. All three sleep in the same bed. In the morning,  Cheenakar goes on his job. Malli wakes up and is shocked to see Sivakavi sleeping next to her. She runs away, but a servant maid notices this and informs Vanji. Vanji, who was waiting for an opportunity to take revenge on Sivakavi, projects this as an illicit relationship between Cheenakar’s wife Malli and Sivakavi and brings it to the notice of the king. Many people in the palace start talking about this ‘illicit relationship’. Upset with causing damage to the life of his friend and his wife, Sivakavi leaves the kingdom.  Cheenakar does not bother about these loose talks. He even ignores the king’s comments on this. But he gets upset about Sivakavi leaving him and falls sick.

Goddess Kaali, who gets angry with Vanji’s loose talk, comes as a  snake, bites, and kills her. Sivakavi collects his earnings kept with the daasis and goes to meet his wife. On his way, he meets Lord Murugan in disguise, who teaches him the valuable lesson that all the gods are one and the same.  Sivakavi realizes his mistake and after seeing Lord Muruga in all splendor, sings in his praise and throws away all his earnings as advised by the Lord. Sivakavi reaches home, but  Amritavalli, misguided by her friend, does not welcome him wholeheartedly. Instead, she ill-treats him for not bringing any wealth even after being away from home for two years.  Her materialistic attitude disappoints Sivakavi and makes him sever his relationship with her after giving her much gold through God’s blessing. By the time she realizes her mistake,  it is too late and Sivakavi has left. Amritavalli goes searching for him. Finally, she gets the darshan of Lord Murugan and dies by immersion in water in her pursuit of the Lord.  On coming to know that his friend Cheenakar is seriously ill,  Sivakavi rushes to meet him, but before he reaches the palace,  Cheenakar is dead and his body is placed on the pyre. His wife prepares to die with her husband and everyone assembled there, including the king, sees Sivakavi arriving and blames him for Cheenakar’s death, referring to the ‘illicit relationship’.  Sivakavi challenges everyone and asks the person who has not committed any sin to throw stones at him. No one comes forward. Sivakavi then narrates what really happened in the palace and his true friendship with  Cheenakar, and Sivakavi’s respect for Cheenakar’s wife as his mother. He lashes out at everyone, including the  King, for casting aspersions and prays to Goddess Kaali to increase the flames so that he is also burnt with his friend and his wife. His wish is fulfilled, but to everyone’s surprise,  the flames are extinguished and all the three walk out alive from beds of flowers. The king and the people showed their respect for the three. Sivakavi’s fame remains eternal. 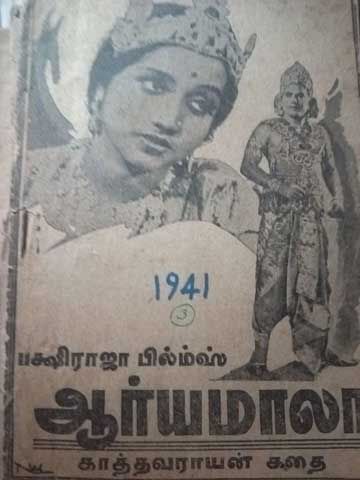