Kachche Dhaage is the story of two ordinary people who after being trust into the most extraordinary circumstances, evolve into two heroic and remarkable individuals. Aaftab (AJAY DEVGAN), is a petty smuggler. living life perpetually on the edge. Dhannjay (SAIF ALI KHAN), is the quintessential yuppie living in the fast lane. Aaftab loves Rukhsana (MANISHA KOIRALA), whose family is dead against him because he is illegitimate. Dhananjay is engaged to Ragini (NAMRATA SHIRODKAR). Both Aaftaf and Dhananjay are immersed in their own lives. Both are blissfully unaware of the fact that they are step brothers.

When the brothers do meet, it causes an emotional storm and they end up hating each other passionately. Then fate plays a cruel trick and Aaftab is forced to entrap Dhananjay. But following a series of quick turns and reversal, both Aaftab and Dhananjay ironically find themselves on the same side-the wrong side of the law! Handcuffed together and chased by the BSF, the CBI, the border mafia and every policeman along the way, our two heroic don't even know, why everyone is thirsting for their blood!

And so begins an exciting race across the tricky terrain of Rajasthan-on mobikes, cars, stolen trucks, goods train, even on foot, shot at, beaten bounded by dogs and betrayed, Aaftab and Dhananjay scrape through some fight situations by the very skin of their leech. All this, combined with their mutual dislike of each other, turns this chase into a lethal roller-coaster ride.

From the blazing deserts of Rajasthan to the snow capped peaks of Switzerland, Kachche Dhaage covers a sweeping canvas of visual delight. The film also boasts some thrilling action sequences, including the heart-stopping one where Ajay Devgan is tied to the undercarriage of moving goods train!

Of course the most distinctive feature of Kachche Dhaage film is its music. The late Ustad Nusrat Fateh Ali Khan has surpassed himself and created music that bears the stamp of imortality. Kachche Dhaage is also the first and the last film where two legends- Lata Mangeskar and late Ustad Nusrat Fateh Ali Khan have worked together in wonderful harmony. A unique distinction indeed for a unique fulm. 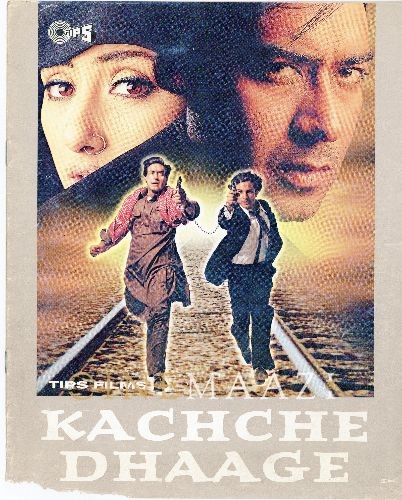