KAMLA is based on a very famous play of the same name which was inspired from the newspaper expose of a real life incident of slave-trading of women as it exists even today in the remote villages of India.

VIJAY TENDULKAR, in his screenplay has drawn a parallel between that incident and the kind of exploitation which takes place in most conventional marriages where the wife has no identity of her own. Inspite of that the wife accepts the traditions and norms of marriage because of the security it provides, even though it virtually amounts to slavery.

KAMLA is the story of this kind of slavery and exposes the strange paradox in our Society, which only superficially condemns one such action and condones another.

Newspaper reporter Jai Singh Jadhav (MARC ZUBER) in search of a scoop goes to an interior village and purchases a tribal girl KAMLA (DEEPTI NAVAL) with the purpose of bringing her to New Delhi and presenting her in a press conference as evidence of the existence of flesh market and slave-trading in modern India. Jai Singh's wife Sarita (SHABANA AZMI), through a series of interactions sparked by the catalytic presence of KAMLA in her home, comes to realise that her own status in her house, inspite of ten years of marriage, is nothing more than that of a "Slave". Sarita's conscience revolts at the indifferent and callous attitude of her husband towards KAMLA whom he is exploiting for his own professional advertisement.

KAMLA's story sends shock waves through the capital and becomes a political embarrassment for the powers that be, who conspire to wipe out the very existence of this evidence - KAMLA.

Sarita is further enraged that her husband is only interested in the sensational scoop aspect of KAMLA's disappearance with no regard for her safety and well-being even though he was responsible for bringing her to Delhi. She decides to take extreme step of leaving her husband who she now sees a chauvinist, an opportunist and an exploiter.

Sarita's uncle, Kaka Saheb (A.K. HANGAL), who is visiting her during this period is eye-witness to her emotional crisis. He prevents her from taking any extreme step by making her understand that Jai Singh is the worst kind of "slave" - a slave to his blinding ego and ambition.

An ironic twist in the development of the story emerges when Jai Singh finds himself dismissed from his job by his employers who are under political pressure. In the absence of the tribal girl KAMLA, his news story is made out to be hoax and realisation dawns on him that he is also exploited and is not better than KAMLA.

The ultimate analysis: In an ongoing cycle of exploitation, every person is a KAMLA. 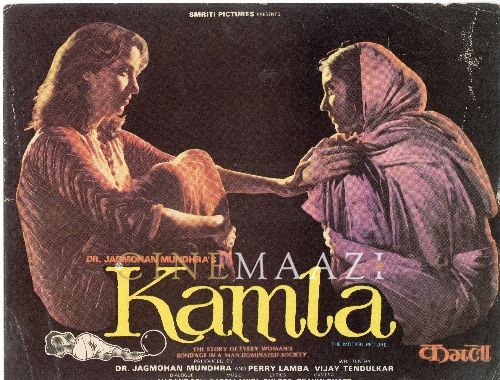