'Leela' is the manifestation of a great soul. In the case of all supermen of all times and climes there have been such manifestations which served as beacon lights-lights for the dark and dreary paths of the

'Bal Leela' of Lord Krishna or the manifestations of his child-hood stage have been often dealt with screen purposes. The present venture touches on a later period.....His association with Sree-Radha emblem of sanctified human love, bordering on divinity.

"To be in the water but not of the water" like lotus, is the main theme of Lord Krishna's Philosophy as expounded in 'Bhagwat Geeta'. Every stage of Lord Krishna's own life on this earth, whether in the sphere of emotions or duty was a high water mark of the same teachings in action. Emotions regulated by the supreme ideal could never clash with duty as such at any point. Infact there was a refreshing reign of sublime harmony.

"Ras-Leela" accentuates this point with great clarity and we have confined ourselves mainly to this period of Lord's life in our present endeavour. There is a clear writing on the wall in the matter of moral love and love that knows no perishing.

Prince of tyrants, Kansa, assumes the king-ship of Mathura after confining his father in prison. Through 'Akash Bani' he comes to know that his sister Devaki's eighth issue would mean his own annihilation. It has been his regular lookout since then to kill every babe of his sister whom he had locked up in a cell.

The eighth issue in the person of Lord Krishna escapes his machinations. On the stormy night of Lord Krishna's birth, Basudeva goaded by divine inspiration and assisted by the 'Goddess of sleep' crosses Yamuna in-spate and exchange Lord Krishna with Nanda Raja's newly born daughter whom he carries to his own wife.

Kansa tries to kill that girl in the course of his usual practice, but the girl flies to heaven after warning him that he will not be able to escape his doom as his future slayer was still intact on earth. Kansa continues with his restless and heartless career of butchery.

Eighteen years later Nanda Raj with his son Balaram and adopted son Lord Krishna and their retinue happen to be in Brindaban forest. Lord's Captivating countence   and winning ways are the topic of the day.

King Brikhabhanu's daughter Sree-Radha, despite her best efforts to the contrary cannot resist Lord's attraction. So is the cause with all her friends. In the meantime her parents select a bridegroom for her and alike a dutiful daughter she had all respect for their wishes though her heart cries aloud in another direction. Her husband also happen to be an ardent devotee of the Lord.

'As time passes, Sree-Radha realises that she cannot repress the call within to meet the Lord off and on. Her meetings set all sorts of rumours afloat. Scandalmongers  approach her husband who brushes them aside with scorn.

A time later on however, when even the husband finds his faith tottering. It is a calamitous crisis for Radha in the eyes of everybody without exception. Lord's miraculous succour proves her timely aid and her chastity asserts herself clear as crystal.

Kansa, in the meantime, becomes very anxious to do away with Lord Krishna as soon as possible. Though his minister, 'Akrur' he sends an invitation to him to visit Mathura on the occasion of 'Dhanuryagya'. This spells a poignant pain for Sree-Radha and he friends The Lord responds to the call of duty in preference to the call of his heart. He must kill

Kansa and free mankind including, his imprisoned parents from the clutches of evil and establish 'Dharma Raj'.

Sree-Radha and her girl-friends are transported from the sphere of moral love to the domain of LOVE DIVINE on the wings of etherial Gyan.

And Lord's mission to this planet finds it all-sided fulfillment. 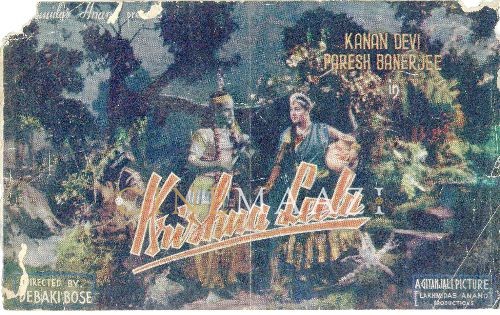 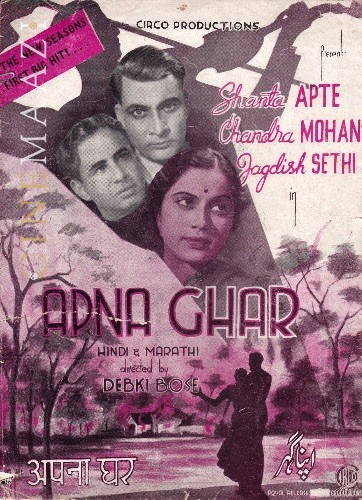