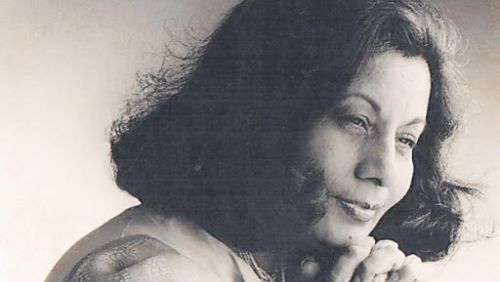 One of the most prolific costume designers in Indian cinematic history, Bhanu Athaiya is renowned as the first Indian to win an Academy Award for her work in Richard Attenborough’s Gandhi(1982).

Bhanu Athaiya was born as Bhanumati Rajopadhya on 28 April 1929  into an orthodox Brahmin family in Kolhapur in 1929. Her father, Annasaheb, was a painter, and the young Bhanu was attracted towards the arts as well. He was also a photographer and worked in the production team of renowned filmmaker Baburao Painter. In 1940, he codirected the mythological film Mohini along with Madhukar Bavdekar. She was inspired by her father and supported by her mother, Shantabai, to try her luck in the arts. She joined the J.J. School of Art in Bombay and graduated in fine arts. A talented artist with an eye for detail, she contributed three of her paintings to the newly formed Progressive Artist’s  Group’s (PAG) show held in Bombay in 1953. Some of the most revered Indian artist like M F Hussain and S H Raza were part of this group and showcased their work in this exhibition. Bhanumati Rajopadhya had the honour to be the only woman artist whose work was showcased. Her work was influenced by Pahari miniatures. She was encouraged by her cohorts and teachers to hone her skills but she chose to make a more practical decision and shifted her focus to fashion designing. During her art school days, she secured her first job as a fashion illustrator in the popular magazine Eve’s Weekly.

Following this, she worked for some time in a boutique as a dress designer. The boutique was a popular one, frequented by top actresses of the time like Kamini Kaushal and Nargis. Impressed with Bhanu’s talent, Kamini Kaushal signed her on as a personal designer, and Bhanu Athaiya designed her costumes for films like Shahenshah (1953) and Chalis Baba Ek Chor (1954).

In the late 50s, she conceptualised a gown in a piscine theme for Nargis to wear in the film Ek Tha Raja Ek Thi Rani, but unfortunately, the film was shelved but a photograph of Nargis in the gown can still be found in the internet.

Bhanu Athaiya got her first break as a costume designer for Guru Dutt’s C.I.D. (1956). She remained associated with Guru Dutt for his subsequent acclaimed works like Pyaasa (1957), Kaagaz Ke Phool (1959), Chaudhvin Ka Chand (1960), and Sahib Bibi Aur Ghulam (1962). She also had a successful collaboration with Raj Kapoor in films starting from creating Nadira’s dresses in Shree 420 (1955). Some other films that they worked together in were Mera Naam Joker (1970), Satyam Shivam Sundaram (1978), and Ram Teri Ganga Maili (1985) to name a few. In the 1960s, she worked on some of the most iconic films of the era like Janwar (1965), Guide (1965), Teesri Manzil (1966) and Waqt (1965). The costumes she designed for Sadhana and Sharmila Tagore for Waqt were considered path-breaking for their times. With more female characters represented as college girls in films, they were increasingly dressed in salwar kameez. Bhanu Athaiya made changes to the growing trend by dressing Sadhana in fitting knee length kurtas matched with churri pants. This particular style is still popular amongst college students in India.

Fashion in films has always influenced the masses by creating different trends. One such popular trend was Mumtaz's tangerine saree in the song Aaj kal tere mere pyaar ke charche in the film Brahmachari (1969). Athaiya’s genius conception of dressing Mumtaz in a zipped and pre-plated saree gave her ample freedom to dance along with Shammi Kapoor, while emanating the free spirit and jovial mood of the song and character. It also westernised the idea of the draped saree.

For her Academy Award-winning work in Gandhi, she did thorough research by browsing several materials from museums and libraries to create the authentic-looking costumes. Her designs elevated the performance and contextualisation of the characters.

Another significant project, Lagaan (2001) also made it to the Oscars. She was responsible for conceptualising a periodic Gujarati villager’s look, a cricket attire for them, glamorous gowns for the white ladies, the quintessential red blazer for the British men along with the military uniforms. She prepared for the task by visiting Bhuj in Gujarat and using purely khadi and handwoven fabrics for the Indian characters.

Bhanu Athaiya has also authored the book The Art of Costume Design, published in 2010. In 2012, post being diagnosed with a tumour, she returned her Academy Award trophy to the Academy of Motion Pictures and Arts since she felt that her family would not be able to care for it after her demise.

In an illustrious career spanning over five decades, Bhanu Athaiya has designed costumes for over 100 films and has worked with reputed filmmakers both in India and outside, including Guru Dutt, Yash Chopra, Raj Kapoor, and Conrad Reeks. She passed away in her sleep on 15th October 2020 in Mumbai at the age of 91. She is survived by her daughter Radhika Gupta.