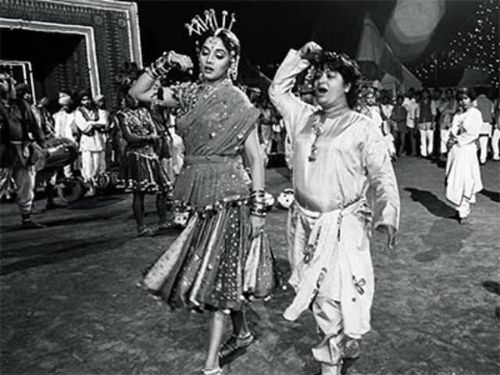 Saroj Khan was born as Nirmala Nagpal on 22 November 1948. Post Partition, her parents Kishanchand Sadhu Singh and Noni Sadhu Singh shifted to India along with Saroj (then Nirmala). She was the oldest of five siblings (four sisters and one brother). Her parents lost everything in the course of the migration. “My father was a rich, educated man in Pakistan so he did not have the habit of working. When they left Pakistan, they lost everything and became very poor. My father later developed cancer and could not work. Soon we were finding hard to sustain”, Saroj once informed in an interview.

Saroj was very fond of dancing from her early days. “I come from an orthodox family but I turned out to be a freak! I used to see my shadow and dance. My mother thought I was a retard and took me to a doctor. The doctor told her she just wants to dance, so let her dance and suggested that she put me in the film industry since my family needed money. “I was the oldest of four sisters and one brother. I had to take care of everyone in the house,” she said.

At the age of three, Saroj appeared as a child artist in Nazarana which she played the role of the child Shyama. She had to sit in a moon and sing. She started getting more offers and became very popular as a child artist, but soon reached an age where she would not get more roles.

At the age of 10, Saroj joined a dancing troupe in the film industry and danced for one-and-a-half years as a background dancer. She also appeared as Radha opposite Baby Naaz's Krishna in R D Mathur's Aagosh (1953). She appeared as a troupe dancer in the film Howrah Bridge (1958) in the song Aaiye Meherbaan. She also appeared in the songs Zulmi sang ankh ladi and Chadh gayo papi bichua in the Bimal Roy classic Madhumati (1958) where B Sohanlal was the choreographer. Choreographer B. Sohanlal was impressed by her dancing and made Saroj his assistant. She was just 13 then. Saroj polished her dancing skills under her guru, Sohan Lal. Later, she herself shifted to choreography, first as an assistant choreographer and later getting her break as an independent choreographer.

At the age of 14, Saroj had a relationship with the already married 43 years old, Sohanlal. She had two children with him, Raju Khan, who is a choreographer, and Cuckoo Khan, who died in 2011 of liver complications. Since Lal was not ready to give her kids his name, she later married a Pathan, Sardar Roshan Khan and had one child by him, Sukaina, who has a dance institute at Dubai.

Her first choreographed song was Nigahein milane ko jee chahta hai from Dil Hi Toh Hai(1963), when she was only 14. It was picturised on Nutan. P L Santoshi taught her how to join movements and make them dance steps. In between, Saroj went to Kolhapur to learn Marathi dance.

The actress Sadhana assigned Saroj as her own choreographer. She also assisted PL Raj in Intequam (1969) because Sadhana was the heroine. Sadhana later asked Saroj Khan to choreograph the songs for her directorial debut, Geetaa Mera Naam (1974) starring Sunil Dutt and Feroz Khan.

After that, she started getting offers from big banner productions. She did films like Zameer (1975) and the song Jat yamla pagla deewana in Pratiggya (1975) and Anand Ashram (1977). She also assisted P L Raj in the 1975 hit Dharmatma(1975).

Saroj was very close to Hema Malini. “One day I was assisting PL Raj in Dharmatma and we were shooting the song Meri galiyon logon ki yaari baadh gaayi. She had to do a movement that she just couldn't do because of her Bharat Natyam training. I got tired and sat down and instructed her from a chair, but she called me to her and insisted I show her the steps. As soon as I got up, the huge overhead solar light fell on the chair where I was sitting!  I told Hemaji, from today onwards this is your life,” Saroj reminisced.

After placing them all in good jobs, she returned to Bombay. Zarina Wahab called Saroj for her film Jazbaat (1980) starring Raj Babbar and Savita Bajaj. “I told Zarina, I will do the song for free, but if Rajshri Production likes it, they have to pay me the price I quote.” The song was Ho goriya re. Rajshri liked the song and Saroj was back in business. After that, “I did some films with Bindiya Goswami and Vinod Mehra. Subhash Ghai called me twice for songs for Vidhaata (1982), but I had other commitments. Finally, I choreographed Pyaar ka imtihaan for him, which was picturised on Sarika. He gave me my first big film Hero (1983), where I did all the songs and everybody came to know that I can choreograph songs. There was this notion in the industry that a woman cannot be a master.” Her return went off to a great start with films like Lava (1985), Jaanoo (1985), Awara Baap(1985) and Nagina (1986),

Saroj had been in the industry for a long time but was not yet established.  She shot to fame with the venomous dance moves she choreographed for Sridevi for Main tere dushman from Nagina. But it was Tezaab (1988) which was her big breakthrough and there was no looking back after that. Ek do teen, picturised on Madhuri Dixit went on to become a chart-buster and all-time favourite. “I composed Ek do teen in 25 minutes but Madhuri rehearsed for 17 days because she was not famous at that time; it was that song that made her famous. I became so popular that actresses started fighting over me.” As the track went on to become a hit, the duo went ahead and revived their magic with Tamma tamma loge from the movie Thanedaar (1990). Her choreography improved Madhuri as a dancer, and played a role in Madhuri getting the "The Dhak Dhak Girl of Bollywood" tag, when she danced to her direction for the very famous track Dhak dhak karne laga from the 1992 released Beta. “Madhuri Dixit is one actress who gets all the moves right, she moves right, she smiles at the right time,” Saroj said.

She choreographed only three songs in 2012 -- Gun guna in Agneepath, Dil mera mukt Ka in Agent Vinod and one in Rowdy Rathore. Her last released film was Kalank (2019) where she was reunited with Madhuri Dixit for the song Tabaah Ho Gaye.

Working at the highest level in the industry for decades, Saroj turned heads in the year 2002 with the superbly choreographed Dola re dola from the super hit film Devdas which fetched her the National Award for Best Choreography. This was later followed with her second and third National Awards for her work in films like Sringaram and Jab We Met.

She has a hat-trick of Filmfare Awards from 1989-91 for Tezaab, Chaalbaaz (1989), and Sailaab (1990) respectively. She also won the Filmfare Awards for Beta, Khalnayak, Hum Dil De Chuke Sanam, Devdas and Guru. She won the prestigious American Choreography Award for Outstanding Achievement in Feature Film for her work in Lagaan.

She was known for her intense dedication to her work. “If a song is extraordinary, then I myself dance as soon as the song plays, and whatever I do my assistants follow. Within 20 to 25 minutes, a song is choreographed. But if the song is dull, and we have to pep up the dance movements, then it takes me from three hours to one day.”

Saroj was very close to her family. “My life is about my family. I don’t attend parties. I don’t socialise. I don’t ask for work. I don’t sit near the feet of any hero and tell him I made a film and have losses of Rs 8 crore please give me work.”