At this dawn of a Happy and Prosperous New Year, we have the pleasure in presenting you our greatest achievement of the Year "LAVANGI" a picture which we are confident will create a land mark in the sphere of Film Industry. This picture is neither a Novel nor a Drama, but a true story which took place in the Mughal Harem during the reign of Shahjehan - A Super Costume Picture with a Mythological touch.

A Moral Picture with the purpose of unveiling the screen of misfeeling among humanity and ultimately elevates you to the light of eternal Prosperity, wherein you will observe the moral that for the Almighty every living being on the surface of the earth is alike irrespective of cast or creed and it is we who created the differences and distinctions.

This picture will reveal this moral clearly, when you see how a Muslim Emperor entertains Hindu poet in his Royal Court. It is picture of Actions, Love, Tunes and Dance parade.

The most stupendous spectacular soul stirring epic celluloided and presented for the merry and pleasure of Millions. Yet another Box Office Samsher from Madras.

Story by the famous writer B.L. Kavi. The Melodious songs and beautiful dialogues are by Mr. Saraswathi Kumar Deepak, the great melody maker of filmdom. The lilting music and sweet tunes are given by the vizard C.S. Ram. produced by Sri Jagadish Films Ltd., Madras at New Theatres Studio, Calcutta. It is directed by Mr. Y.V. Rao a born director and creator of several Box Office Hits of the South.

Mr. Y.V. Rao, a genius is himself in the main role which enhances the merit of the picture. Miss Rukmani, the fairy queen of South and well known for her unparalleled beauty and enchanting dances is the heroine who presents a series of variety dances all quite different from anything. The latest group dance which you seldom find in any other picture is performed by the famous dancer Azuri and her party. Mr. Ramesh Tiwari the veteran is in the role of Shajehan and Miss. Susil the Begum will capture your hearts. Mr.

Tandon will deprive you of your worries and keep you in rollicking laughter throughout the full length. Thus it is competent in all aspects and no wonder one cannot explain by a pen. Better have a look at the screen and avail yourselves of the opportunity with your family and be a paradise.

Time and Tide will wait for none! Dear Exhibitor friends don't you think it a pride to release such a picture at your House and be the recipient of the pleasure and Co-operation of your citizens. Then why you delay - rush up and win an eternal prestige of your House. 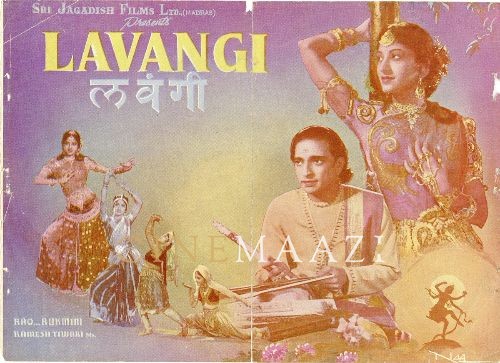