A spectacular chance beings romance to the lives of Vijay, son of the village Zamindar and Madhu, the simple hearted and beautiful daughter of local Purohit. Vijay's mother agrees to the union but his proud and arrogant father is outraged; he orders Vijay to leave the village immediately and offers the Purohit financial aid to get his daughter married off as soon as possible.

So deep has become their love for each other that Vijay realises that neither of them will find happiness again if they are now separated; with the help of his boyhood friend Shambhu he manages to pursuade the Purohit that he should be secretly married and one day his father would change his mind and understand.

After the marriage, Vijay has to leave immediately for Lucknow. But unable to bear the separation on the wedding night (sohaag raat) he slips away from the train at the next station and steals away in the dark to see Madhu....and of that night a child is conceived.

Learning of the train escapade from Muneem who accompanied Vijay, the Zamindar comes to Lucknow. From Madhu's first letter, which was intercepted by the Muneem, le learns. He orders the Muneem to intercept all letters from both sides.

After his recovery, his father tells him that he has arranged for his marriage. Unable, on the one hand, to understand Madhu's silence, and on the other to confess everything to his father, Vijay slips away from the house and goes to the village to find out for himself. And there he hears a strange story from no less a person than the Puro it himself...

Meanwhile, what of Madhu? Eating her heart out at the silence of Vijay, she finally becomes disparate when scandal rises its ugly head in the village, since no one believes she was married. Thinking him to be his last sanctuary, the heart broken Purohit confesses everything to the Zamindar... only to be laughed at on his face and sent away in disgrace. And then Madhu decides to take matters in her own hand.

But Shambhu, who has been away from the village all these months, suddenly returns at this stage and also leaves in search of Vijay.

But fate takes a hand and twists their effort in such a way, that when both Shambhu and Madhu are gone form the village, the Purohit has sorry tale to tell Vijay when he comes looking for his Madhu.

Vijay must marry again. But what should happen to Madhu the mother to be of his offspring? Swept up in the grim whirlwind of a poignant tragedy not of her own making......She harbours in her heart a hatred for the arrogant society that had humiliated her and reduced her to dust, a curse rises up from the bottom of her heart as tragedy follows tragedy in its wake in every step she takes, and her poisoned soul cries out for revenge........

The story of "Madhu" is the story of her revenge...... and a magnificent climax which unfolds on the silver screen. 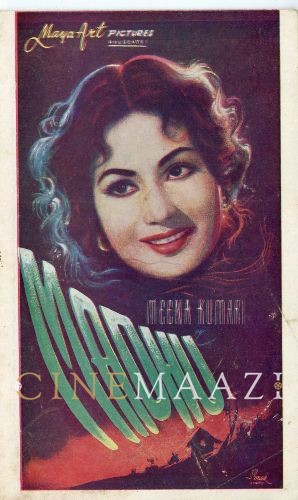