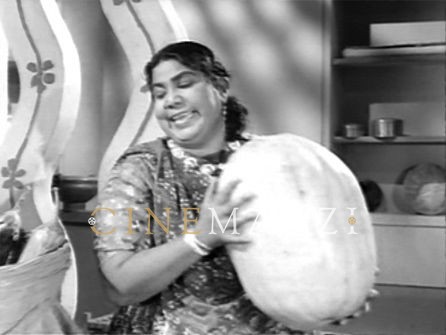 Celebrated as Hindi cinema’s foremost comedienne, Uma Devi Khatri, better known by her screen name Tun Tun, was a popular and well-loved actress and playback singer. She acted in no less than 198 films in Hindi and other languages including Punjabi, in the course of her career that spanned five decades. One of the few women among a league of male comedy actors of her time such as Bhagwan Dada, Agha, Sunder, Mukri, Dhumal, Johnny Walker andKeshto Mukherjee, she broke the existing glass ceiling. From wowing listeners with her plaintive voice, to taking the plunge into acting and becoming the comic relief who spontaneously evoked joy and laughter, she accomplished it with apparent ease. Her enormous popularity also went on to inspire a dubious slang—plus sized women were thereafter addressed by the disparaging label ‘Tun Tun’.

Born Uma Devi Khatri in a small village called Alipur near Amroha, in present-day Uttar Pradesh, on 11 July, 1923, her parents were killed when she was just two years old. Left in the care of a relative, in a childhood marked by abject poverty, she was helped and inspired by an Excise Duty Inspector, Akhtar Abbas Kazi. After Kazi’s migration to Pakistan post Partition, she moved to Bombay to explore opportunities in playback singing. Initially she found shelter with Javed Hussain, the assistant of director Nitin Bose. Her earnestness and vocal prowess ended up impressing composer Naushad Ali, who auditioned her and signed her on. Thus, she made her solo playback singing debut in Nazir’s Wamiq Azra (1946). Success and security followed. She signed a contract with filmmaker A R Kardar, who regularly worked with Naushad. Uma Devi was now in the midst of musical greats such asNoor Jehan, Rajkumari, Khursheed Bano andZohrabai Ambalewali. The Kardar filmDard(1947) saw her becoming popular with hits such as Afsana likh rahi hoon dil-e-beqarar ka, Yeh kaun chala meri aankhon mein sama kar and Aaj machi hai dhoom jhoom khushi se jhoom. Her duet with Suraiya, Betaab hai dil dard-e-mohabat ke asar se also became immensely popular.Mehboob Khan's Anokhi Ada (1948), which followed, brought her more hits with Kahe jiya dole and Dil ko lagake humne kuch bhi na paya. Established in the league of top playback singers, she went on to reach greater highs with director S.S. Vasan's Chandralekha (1948) made by Gemini Studios, Madras. The film included seven songs by Uma Devi, including hits such as Saanjh ki bela. The songs encompassed perhaps her best work in her career in playback singing. However, the success was a double-edged sword as by singing for Chandralekha she had breached her contract with producer-director Kardar. She also sang for films like Heer Ranjha (both 1948),Bhikhari, Bhakt Pundalik, Pyar Ki Raat, Sumitra, Rooplekha, Jiyo Raja, Hamari Kismat (all 1949),Bhagwan Shri Krishna(1950), Saudamini (1950), Deepak (1951), Jungle Ka Jawahar(1952) and Rajmahal(1953).

Her career witnessed a slump in the years that followed, due to multiple reasons such as her increasingly outdated singing style, restricted vocal range, as well as the competition from favourites such asLata Mangeshkar and Asha Bhosle. It was at this point of low that her mentor Naushad suggested acting as an option, as he knew well her sense of comic timing and effusive personality. On the spur of the moment, she declared that she would take the plunge into acting if could act opposite her favourite, Dilip Kumar. Naushad took up the challenge and convinced his friend, Kumar to cast her in one of his films. This is how she became part of the Dilip Kumar-Nargis starrer Babul(1950). It was the birth of a new comic star—Tun Tun; Dilip Kumar had also given her a new name to suit her new persona.

Last seen in Hindi films in Kasam Dhande Ki(1990), Tun Tun passed away on 24 November, 2003. She is remembered for her immense talent, her pioneering work in the realm of comedy for women, her cheerfulness, and perseverance.