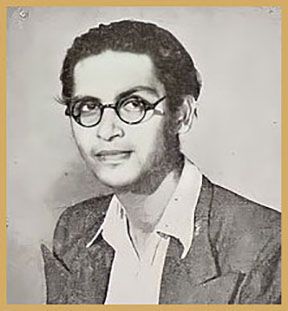 Born in Benares on 30 September 1909, he graduated with a degree in Science. He went on to serve as editor of the Science and Culture journal. Veering towards cinema, he began his career with Bombay Talkies, where he joined as a supervising technician.

He went on to pen the script for Bandhan (1940), along with Amiya Chakraborty. Starring Leela Chitnis and Ashok Kumar, this N R Acharya directorial became the second highest grossing Indian film of the year.

Next, he collaborated with Khwaja Ahmad Abbas on the script of Naya Sansar (1941). The film, centered on radical journalism, also won the Bengal Film Journalists' Association Award for the best story and screenplay.

His directorial debut came with the hit Jhoola (1941), starring Leela Chitnis, and Ashok Kumar. Its success established Kumar as one of the popular actors of the era. The fourth-highest grossing film of the year, it told the tale of two half-brothers, Ramesh (Kumar) and Mahesh (Shah Nawaz), who love the same woman, Geeta (Chitnis). Mahesh inherits his father's estate (half of which belongs to Ramesh) while Ramesh works as a postman. Complicating the situation is the presence of Kamala (Karuna Devi), Mahesh's former beloved who eventually wrecks his matrimonial designs on Geeta. The film adhered to the Bombay Talkies’ tradition of the ruralist melodrama, with a simplified Hindustani dialect. It also featured the studio's familiar cluster of supporting characters, such as the benevolent patriarchal Zamindar, the postmaster, the dancing courtier and the postal employee (Mumtaz Ali).

This film also marked the shortly to be formed Filmistan Studio's signature style of taut, dramatic editing. This is evident in its complicated climax which depicts Mahesh's henchmen chasing Geeta, who is rescued by Ramesh, and by a popular revolt among the villagers. The film also featured Ashok Kumar singing his popular song Chali re meri nao.

The crime movie Kismet (1943) was Mukherjee's next directorial. It portrayed the story of Shekhar (Ashok Kumar) who comes to know that Rani (Mumtaz Shanti) became disabled because of him, and thereafter decides to help her by hiding his real identity. The film went on to become Indian cinema's first bona fide blockbuster, also emerging as one of the most influential films of all time. The film introduced some bold themes for the first time in the history of Indian cinema, such as depicting an anti-hero character as well as an unmarried girl getting pregnant. It also assimilated the Warner Bros. realist style with 'expressionist' overtones. With an anti-British stance, it included the patriotic song Aaj himalay ki choti se phir humne lalkara hai. Running for three consecutive years in the same cinema in Calcutta, Kismet is an early example of a pre-Partition 'lost and found' movie. It was the prototype of the motif of members of a family who are separated by fate or villainy and are finally 'recognised' and reunited.

The following year, his Chal Chal Re Navjavan launched Filmistan Studios. Penned by Saadat Hassan Manto, and starring Naseem Banu, Rafiq Ghaznavi, and Ashok Kumar, it wasn’t well-received. His next, Sangram (1950), starring Ashok Kumar and Nalini Jaywant, was an impactful crime drama that pitted a cop father against his criminal son. A variant of the film noir style launched by Mukherjee’s megahit Kismet, it told the tale of a policeman, who, after the death of his wife, fails to bring up his only son in a good way and spoils him. This creates serious repercussions once the child becomes an adult. The film, which depicted the hero playing villain, is considered an unusually violent crime film for its time.

At Bombay Talkies and Filmistan, Mukherjee directed Ashok Kumar, creating a new image for him. This was to have a big impact on later Hindi cinema as well, for instance, on the image of Dilip Kumar.

While working at Bombay Talkies, budding filmmaker Guru Dutt trained under Mukherjee, though he also assisted Amiya Chakravarty. Mukherjee's formula-based film style was followed by Guru Dutt in his early films. Dutt would later maintain that his directorial Kaagaz Ke Phool was dedicated to his mentor, Gyan Mukherjee, who retired in obscurity after delivering hits like Jhool and Kismet early in his career.