“Paisa-Hi Paisa” is a portrayal of two greedy fathers unhesitatingly bargaining with the lives of their own flesh for the sake of money.

Suresh, Son of Swarupchand a cunning and greedy businessman of Bombay, is at heart and soul pursuer of Art and avoids business like a rattle snake. But being hard up with money, of his own, he is unable to translate his dreams on stage.

Hiralal, a Mill-owner and a close-fisted businessman of Bombay loves money more than his only beautiful daughter Malti. He has been postponing her marriage for want of a suitable bridegroom who does not love money, Now when he learns that Suresh, son of one of his sub-agents, is an honest pursuer of art and kicks money like anything, he decides to marry Malti with Suresh. To gain this end he sends a notice to Swarupchand to pay off the old debts within a very short period of time.

In the absence of any solution, Suresh has to go to Delhi to auction the house of Prakashchandra to pay off the debt of Hiralal. Incidentally he meets his dream beauty in Lata, who is daughter of Prakashchandra the owner of the house to be auctioned. Suresh being in love with Lata, marries with her and finds a life-long companion in his adventure of art.

Meanwhile, Swarupchand goes to Hiralal regarding the extension of the time limit and Hiralal proposes marriage of Suresh and Malti in consideration of millions of rupees, cars and bungalows, but all payable only after the death of himself.

Malti was betrothed to Romesh in early days of childhood. But greedy Hiralal cunningly made Romesh a bankrupt, destroyed his father’s business and ruined him to the point of madness and desperation. Hiralal got him sent to lunatic asylum and broke the betrothal rites.

Suresh adopted a diamond cuts policy and succeeded in his mission of art with glorious triumph. The greedy fathers reaped the harvest of sorrow and shame while Suresh got Lata and Romesh got Malti. 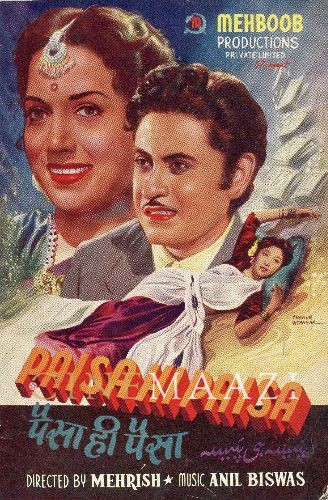