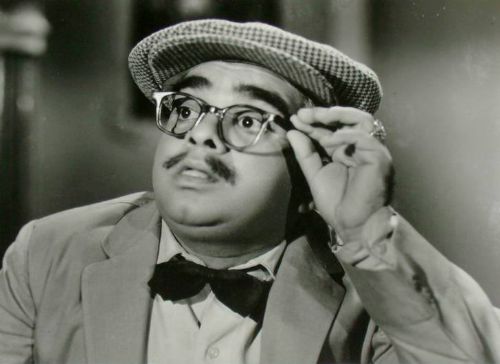 Born in a Konkani Muslim family on January 5, 1922 in Alibag, and named Mohammed Umer Mukri, he was a qazi, a teacher, by profession.

He came into the film industry by sheer chance. Acting in a school play titled Khan Bahadur for three continuous years, he won a coveted prize for his performance. Employed in government service, during war time he had to instruct people in their homes to cover their windowpanes and mirrors to prevent light escaping and attracting the enemy’s attention. His relative was involved in creating Mahalaxmi Studios. When working in the school play, the owner Hussain Begumat had joined ABC Studios, and made his first film directed by Zia Sarhadi, titled Nadaan (1943) featuring Noorjehan, Masood, and Aman who is the father of Zeenat Aman. It was in this film that Mukri made his acting debut. He went on to be hired by filmmaker K Asif as Chief Assistant Director, for his first film, the multi-star cast Phool (1945). Written by Kamal Amrohi, it featured Prithviraj Kapoor, Suraiya, Durga Khote and others. He then bagged an offer from Bombay Talkies in the realm of direction.

Keen to find a job that would ensure a steady salary, he joined Bombay Talkies, one of the biggest studios of India at the time. He was listed as an assistant director but would also occasionally fill in for walking parts. It was at Bombay Talkies that he grew close to Yusuf Khan, better known as Dilip Kumar, who had joined the studio. They had been classmates at Anjuman Islam School, and would spend time chatting and joking during lunchtime. The two became friends despite there being little in common between the noted film actor and a simple assistant director. So much so, that Mukri would candidly tell Dilip Kumar that, being his senior, he could tick him off when needed. Mukri, with his gentle smile and personality, also ended up impressing one of the founding members of the studio, Devika Rani. She had him cast in a comic role in Pratima (1945), a Dilip Kumar starrer. The film, which was also the directorial debut of actor P. Jairaj, bore Mukri’s name in the list of credits. His later films with Dilip Kumar, like Aan (1952) and Amar (1954), also became extremely popular.

Regarded as one of the funniest actors of Indian screen, Mukri’s unique acting skills, mannerisms, perfect timing and toothless grin helped him carve an iconic reputation among the comedians of Hindi cinema. He acted alongside practically every leading actor and actress of the film industry. A favourite comedian for directors like Subhash Ghai, Prakash Mehra and Manmohan Desai, he also acted with other comedians like Johny Walker, Mehmood, Asrani and Jagdeep. Mukri’s trademark was his laughter in every scene that had comedic dialogues. Effortlessly walking away with the chuckles, he was hilarious whether playing a servant, gardener or show organiser. Even in small roles with limited screen time, his comic acts remained a standout. He acted in the cop comedy in Babu (1985) with Rajesh Khanna, and played Chote Khan in Subash Ghai’s film Karma (1986). He essayed some of his funniest roles in films like Ram Lakhan (1989) in which he played Dhondu Nai, Coolie (1983) in which he played Rati Agnihotri’s father, Amar Akbar Anthony (1977) in which he played Neetu Singh’s father, and Bombay To Goa (1972) which saw him portray a South Indian character. His last film was Sharaabi (1984), playing the role of Nathulal, made iconic by the dialogue, ‘Mooche ho toh Nathulal jaise, warna na ho’.

Interestingly, he did feature in the lead role for a single film in his career. Titled Hanste Rehna (1950), it was supposedly made within a budget of Rs. 50,000, with the makers counting on his name to make the film a success. It ran for five weeks at Capitol cinema. He played a double role in the film, directed by Mohammed Hussain.

Having witnessed the progressive growth of Hindi cinema from the 40s, Mukri remained a quiet, humble man who worked efficiently, and was well-liked.

He passed away in Mumbai on 4 September 2000 at the age of 78, at Lilavati Hospital due to a heart attack.

His daughter Naseem Mukri went on to write the dialogues of Haan Maine Bhi Pyaar Kiya (2002) as well as the dialogues and screenplay of Dhadkan (2000), besides also acting in it.