It was an era when Music, Song, Dance Laughter and happiness prevailed in the land.

One day, when King KANS was going along in a chariot with his sister Devki and her husband Vasudeo, he heard a voice from the heaven shouting at him that the eighth child of Devki would kill him.

KANS imprisoned his sister and her husband. Seven children were born to this ill-fated couple and KANS killed all of them.

The time for the birth of the eighth child came and suddenly a magic cloud spread all over the prison which made all the guards and warders fall into a deep sleep.

And the child, Lord KRISHNA, was born. Due to the fear Devki and Vasudeo decided to send the child to Nandgaon, the home of Yashoda and Nand.

The gates of the prison were opened by the magic spell and Vasudeo walked out taking the child in a basket and went to the banks of the river Jamuna. The river was over flooded but gave way to Vasudeo to cross, the moment the feet of Lord KRISHNA touched the water of the river. Thus the child reached his new home. Vasudeo exchanged the child Krishna with the new born daughter of Yashoda and brought the little baby back to the prison.

KANS had already heard about the birth of this eighth child. He summoned the babe and lifting high above his head he thought to smash it to the ground, but the child mysteriously slipped through his hand and disappeared far above in the heavens, shouting out at KANS "Your killer is already in Nandgaon" While at Nandagaon the villagers were celebrating the birth of the Lord KRISHNA, Raoha, an exceedingly beautiful young woman of Nandgaon, overjoyed at the birth of the child came running to the house of Yashoda and took the child in her arms.

Meanwhile an eternal love sprang up between Radha and Krishna. Happiness, joy and laughter were the daily routine of the people at Nandgaon. Captivating dances of Radha and lilting tunes of flute played by Krishna became the attraction of one and all in Nandgaon. All the young girls known as Gopis gathered together tickling, playing and rejoicing with Krishna, but Krishna never missed stealing and eating the butter and milk kept in their houses. The Gopis performed a 'Raas-Leela' and danced with "Radha and Krishna".

KANS then sent Kalia Naag, a fearful demon to poison the waters of Jamuna so that all the inhabitants of Nandgaon including Lord Krishna should die.

The demon took the shape of a deadly snake to poison the waters. One by one the inhabitants of the village started dying. Then Lord Krishna came upon the scene. He entered into mortal combat with the snake and the result was that the snake submitted to Lord Krishna and apologised.

KANS sent many demons to Nandgaon to kill the child but all of them met their death at the hands of this child.

But now the big moment arrived. K A N S unable to content himself, fell upon Lord Krishna in mortal combat.

It was a prolonged fight, with the tyrant but Lord Krishna killed the evil KANS. 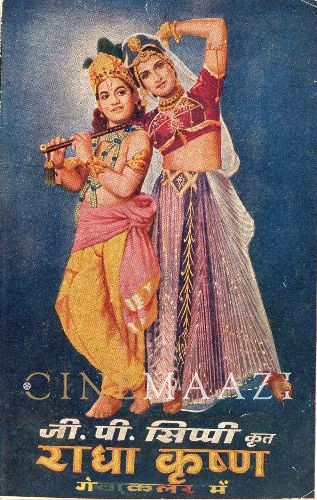