The "Rakhi" is the traditional ornamental string that binds a brother to his sister in fraternal affection and enjoins on him the responsibility for her protection and security. It symbolises to the average Indian his duty to his sister and to the Indian woman, her sisterly devotion to her brother. To Raju, the love and affection of his only sister, Radha, was dearer than his own life. To Radha, Raju was father, mother and brother rolled into one.

Radha falls in love with Anand, and Raju, whose only concern in life is the happiness and welfare of his sister, marries her off to Anand. But with Anand comes his sister, Didi, whose barbed tongue and poisoned mind soon make it impossible for Raju to stay in the same house. He sets up home with his wife, Malti. Malti dies in childbirth, adding to the sorrows of Raju. Didi makes his life more miserable when she, through deceit, makes Radha serve a notice on Raju for division of their properties. In desperation, Raju renounces his own pleasures and his home and goes wandering   from place to place in search of solace and peace of mind.

The bonds of affection between him and his sister, Radha, are however abiding. Failing to find peace of mind anywhere, Raju retraces his steps back to his old house - old, haggard and weary. The day he finds himself in his home-town is Raksha-Bandhan - the day on which, years ago, his only sister so affectionately used to tie the "Rakhi" around his wrist as a token of her love and regard.  As he ponders over the past, he sees a child nearly run over on the streets by a speeding car, as the child was lighting a cracker. Raju just manages to save the child, but himself falls on the lighted cracker, blinding himself. Grievously hurt and blinded, he learns that the child whose life he has saved is his own nephew, son of Radha. Radha rushes out on learning that her dear brother has come back to her on Rakhi day, and in all joy and thankfulness ties the Rakhi around his wrist-and the Rakhi once again binds the sister to her brother eternally. 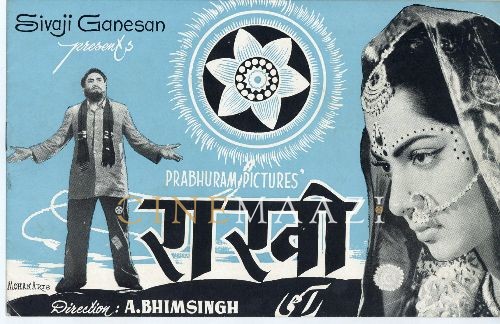