Believe it or not! But the idol of Gopal came from Vrindavan to Vidyanagar to give witness. Since then, this idol was named Sakshi Gopal. The present temple of this idol is in a small village called SATYABADI near PURL. Pilgrims who go round the sacred shrines of India believe that unless they come to Sakshi Gopal and pray to bear witness their pilgrimage is fruitless.

Venu-a Gambler, a drunkard, a cheat, thief, and a music maniac was a spoilt son of devout vaishnavite mother. One day while running away from the police to hide himself, Venu enters the garden of Rajpurohit Banwaridas the paralitic father of Madhavi and Bihari-Venu's gambling den opponent. Here Venu saves life of Madhavi from a serpent bite. Cupid's arrows struck the young hearts.

Bihari wanted the coveted post of Kotwal and the price was dainty damsel Madhavi's hand in marriage to Dipak—a prize fool, son of Raj Mantri. Venu manages to join the betrothal ceremony with the court dancer Manjari as her musician in disguise. Banwaridas refuses to give hand of his daughter to a bafoon like Dipak.

Bihari plans to finish the marriage of Madhavi to Dipak. Venu with ingenious trick foils this plot and saves Madhavi. For Madhavi to remain in Vidyanagar was now full of risk.

Bihari's good wife advices her father-in-law to go for Vrindavan Yatra along with Madhavi and that Venu Gopal to accompany them for necessary help on the way.

In Vrindavan Madhvi inspires Venu to play the role of Udhav in raslila. When Venu prepares for the part of Uddhav and as soon as he puts on Tulsi Mala ( Rosary of Tulsi ), he gets emotional shock and sees that the four dark hideous figures come out of his body—his sins of drinking theft, gambling, and murder. The devils were waiting to re-enter him as soon as he put off the Tulsi Mala and the Garb of Vaishnava. But his eyes were now opened and the transformation came to him, as basically he was a good soul. The sinner Venugopal becomes a true devotee of Radha Gopal. Madhavi's father was almost on the deathbed when Venu brings to him the Bhog (food) accepted by Radhagopal from him. He fulfils his last wish by giving Madhavi's hand to Venugopal. In the temple they were alone and the old man prayed Lord Gopal to bear witness to his last wish.

Raj Mantri wants Madhvi as his son's wife at any cost to save his prestige. Bihari was appointed as Kotwal and sent to Vrindavan. Here in the temple Venu was scandalised during Bhajan, by Manjari and was charged with stealing her ornaments. Venu agreed the facts and the people, enraged, stoned him and threw him out of the temple. Madhvi was taken away back to home by Bihari. When Venu finds that Madhvi was missing and when he was informed that a man Tulsidas was to be hanged at Vidyanagar for the murder which was commited by him, He rushed to Vidyanagar, to save the innocent. He pleaded that he was himself guilty of murder and not Tulsidas.

In the court of Vidyanagar the King hears all arguments and summons Madhvi, her brother, and Mahamantri and all as witnesses. The trial is on. What happens to Venu ? Was Tulsidas acquitted? Was Venu able to bring the only witness Gopal of his betrothal right from Vrindavan? What was the judgement of the King? All these questions can only be replied on the silver screen. 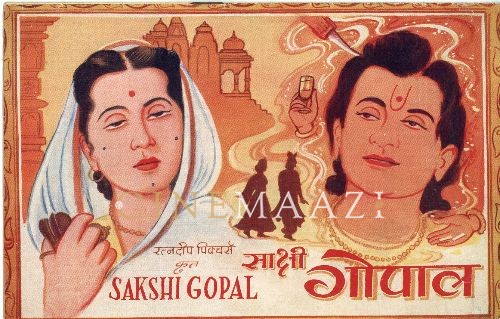