A telegram is sent by the dying young woman, Maria, to six addresses. Each is busy in different activities. Will they reach in time? As Maria's condition becomes worse, she wonders and remembers.

Six young men volunteered for a special and dangerous mission during the Goa Satyagraha, proudly introducing themselves — Jogendernath from the Punjab, Subodh Sanyal from Bengal, Ram Bhagat Sharma from Uttar Pradesh, Anwar Ali from Bihar, Sakharam, from Maharashtra, and Mahadevan from Tamil Nad.

On surreptitiously crossing the Goa border, they met the Seventh Indian, Maria, a local girl with a tragic past, who was to be their Guide in their Goan adventure. Soon it was apparent that they were not merely Satyagrahis not merely the Seven Indians, but that each had a distinctive character, personality, an d ideology often clashing with the character, personality, ideology of the others! And yet, as they shared the adventures, which involved the risk of sudden death, and the certainty of imprisonment and torture, all the seven felt a closeness to each other which they had never felt before.

It is this feeling that is remembered, and revived, when the fateful telegrams with the identical message "DEATH IS WAITING FOR ME AND I AM WATING FOR YOU. MARIA" are received by the six Indians.

At last they arrive in Goa, but fail to recognise each other. Six taxis drive up to the hospital. A sombre-faced doctor tells them they have arrived too late.

Over the grave of Maria, they look into each other's eyes, and find recognition and revival of faith and friendship. 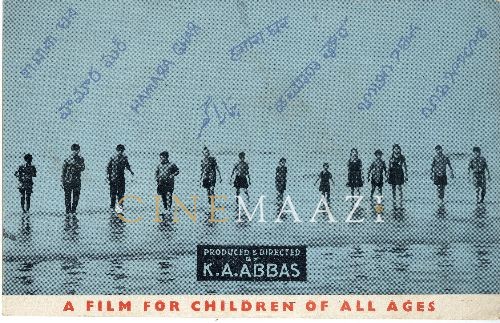