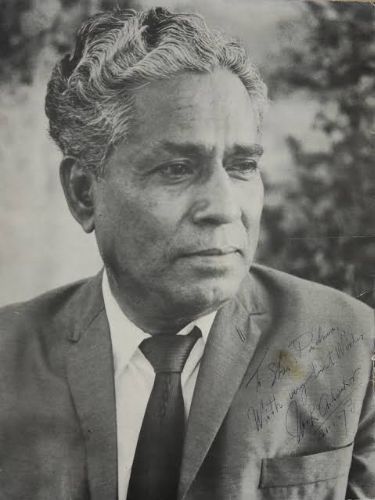 Many illustrious artists and dignitaries of other media fields such as literature, theatre, and painting have occasionally crossed paths with Indian cinema. Perhaps none have made such a mark on the popular imaginary as M R Acharekar did. A celebrated painter, especially of commemorative portraits and rural landscapes, Acharekar is primarily known to film lovers for his work with R K Studio films as well as for Guru Dutt’s classic Kaagaz Ke Phool (1959).

Acharekar was born in Bombay in 1907. He studied at the Kelkar Institute of Art and later received a diploma in painting from the Maharashtra government. He also studied for two years at the Royal College of Art in London during the 1930s. In his early career, he is known to have experimented with photography as well as opening a litho press. He continued to have an immensely successful painting career, particularly due to his skill as a portraitist. He was commissioned to paint the inauguration of the Round Table Conference and the 1932 Silver Jubilee Celebrations of King George V in London.

His first brush with cinema came in 1946 when he did the production design of A R Kardar’s superhit historical epic Shahjehan. His first assignment as an art director was for Mahesh Kaul’s Naujawan (1951). The turning point in his film career came with his association with R K Films which began with the 1951 classic Awara. The film was a massive success and the iconic visuals representing Raj Kapoor’s romantic socialism, from the poverty-stricken streets to the palatial mansion of the judge, were designed by Acharekar. In fact, much of R K Films’ subsequent aesthetics will be shaped by Acharekar’s striking character and set design. Films like Bewafa (1952), Ashiana (1952), Mehboob Khan’s spectacle Aan (1952), Prakash Arora’s award-winning Boot Polish (1954) and Shree 420 (1955) followed. Particularly enthralling was the desert set created for Aan. Acharekar continued working with the likes of Raj Kapoor and K A Abbas, notably for the Amit Mitra and Shombhu Mitra directed Jagte Raho (1956).

K A Abbas’s Indo-Soviet epic Pardesi (1957) featuring lushly painted sets traversing various cultures won him his first Filmfare Award. He would win two more for Kaagaz Ke Phool (1959) and Jis Desh Men Ganga Behti Hai (1960). Guru Dutt’s film may have been unsuccessful at the box office but went on to become one of the most acclaimed films of its time. His collaborations with Raj Kapoor continued with films like Dil Hi To Hai (1963), Sangam (1964), Sapnon Ka Saudagar (1968), his magnum opus Mera Naam Joker(1970) and Satyam Shivam Sundaram (1978).

He served as the Deputy Director of J J School of Art, Bombay from 1937-39, and later as the Principal of the Academy of Art, Bombay from 1948-56. He became the President of the Cine Art Directors Association of India, Bombay in 1968. He held numerous award-winning exhibitions throughout his career. He was awarded the Padma Shri by the Government of India in 1968.

Although trained in the institutionalized mode of painting propagated by art schools, the painted backdrops of Acharekar developed their own idioms in cinema. It had a long-lasting effect on Indian cinema, especially on the genre of the social film. The legendary artist passed away in 1979.