Dev, A College Student, introvert nature, was desperately in love with his college mate Neelam. Although they met frequently, he has not expressed his love directly to her Neelam, a very talkative and jolly girl, could not take Dev seriously The college holidays were started, both departed to their respective native places without expressing the feelings for each other.

On return, Dev Finds Neelam has gone to Bombay due to sudden transfer of her father During College days he had never tried to know in detail about Neelam's whereabouts. Dev dejected, started for Bombay leaving his brilliant acedamic carrier in search of his love, Neelam, much against the wishes of his roommate, R. B. Durman.

In Bombay Dev has become a taxi driver in order to search the girl. Now starts the incidents one after another what could be in day to day's life of a taxi driver and passengers. Dev literally became a Do Gooder and tries to help the maximum people he meets. Mrs. D'sa in whose chawl Dev is staying although shows anger on him for not paying the rent, innerly loves him like her son. One day ultimately he found Neelam, but shocked to learn that she is married. Dev is heartbroken and wants to leave the city, but the northerly love of Mrs. D'sa forced him to stop over.

Dev proposed to Rama, a call girl whom he used to met frequently as a paseenger Rama is shocked and couldn't believe that one can accept her as a wife. Dev was sincere and Rama had to believe him. They both fixed a time for the marriage and Dev was to pick her from a particular place.

As luck would have it, Dev couldn't reach in time and Rama who was fighting with her own emotions whether Dev will come or not fainted and was picked up by Viju.

Dev reached the spot late to find Rama has gone. He went to the wedding place and announced that wedding is cancelled as there is no Bride. Mrs. D'sa intervened and announced the marriage will take place after a week with the girl choosen by her Dev is shocked.

One week passed. Much to Dev's surprise, Mrs. Dsa arranged the wedding of Dev, with Jyoti whom Dev helped a lot earlier during her agony days.

What happened afterwards will be emotionally entertaining for you and your family.

Await for its release at your favourite theatre in your town.

ALL WELL THAT ENDS WELL. 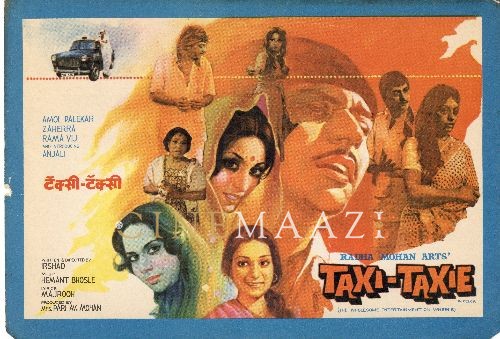