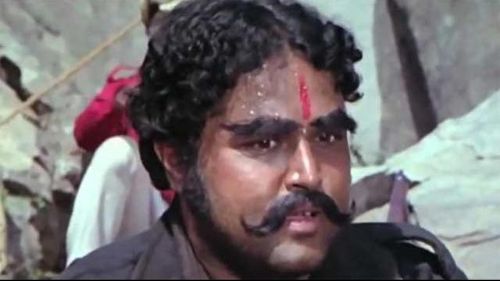 Years after his stint as Gabbar Singh’s henchman Kaalia in Sholay (1975), Viju Khote would be stopped on the street by strangers who would ask him the question Gabbar asks in the film: Tera kya hoga, Kaalia? Remembered for this iconic role, Viju Khote only had two scenes in the film, for which he was paid the whopping sum of Rs. 2500. During the shooting of the film, he also hurt himself when he fell off a horse.

Born in a family connected to cinema, it was but natural that Viju Khote follow their footsteps into acting. His father Nandu Khote was an acclaimed actor on stage as well as in silent cinema. Viju started acting on stage for the first time in a play directed by his father. He soon made his transition to both Marathi and Hindi cinema, following in his sister Shubha Khote’s footsteps. He was known for his wonderful comic timing and his talent for dancing. Viju Khote worked often with Bharat Dabholkar on stage, and Dabholkar fondly remembers how he would receive a standing ovation whenever he danced on stage.

Making his debut in the 1960s, by the end of his career Viju Khote had acted in more than 300 films and over 30 television serials. While he preferred films and theatre to TV as a medium, his most noteworthy performance was in the 1993 Indian take on Mind Your Language, Zabaan Sambhaalke, in which he acted with both his sister, Shubha Khote and niece, Bhavana Balsaver. He made his mark as a sidekick years after Sholay in the 1994 release Andaz Apna Apna, in which he played Teja’s sidekick Robert. His line in the film, “Galti se mistake ho gaya”, became one of the oft-quoted dialogues from the cult film. His other noteworthy performances include Qurbani (1980), Qayamat Se Qayamat Tak (1988), China Gate (1998), Mela (2000) and Pukar (2000). He recently appeared in the acclaimed Marathi film, Ventilator (2016), and in the Hindi-language movie Jaane Kyun De Yaaron (2018).

After a protracted battle with his failing health, Viju Khote passed away on September 30 2019.