History is not wanting in instances where large sections of the populace have been known to place more reliance on the rough and ready justice awarded by a benevolent individual than on the tortuous processes of the law of the land. USTAD PEDRO is the story of one such individual, whose courage and honesty made the people of Pedronagar flock to him for justice and succour.

One day, to this popular "peoples' court", comes a young woman named Radha (Shammi) to charge Pedro's own younger brother Dilip (Ansari) with having fathered her child and then discarded her. But when the pained and astonished Pedro (Sheikh Mukhtar) taxes Dilip with this accusation, the misguided youngster feels wholly unrepentant and walks out on his senior in a huff. He then openly gives his allegiance to the gang of Durjan (Sapru), a hardboiled black marketeer and an aristocrat of Pedronagar's underworld, who is bent upon crushing Pedro, the biggest thorn in his side.

Meanwhile, in a distant town called Badalpur, a dangerous epidemic spreads —worrying all except Durjan, who sees in the calamity a God-sent opportunity to profit from the black-marketing of vital medicines. He corners the market stocks and decides to send them to Badalpur so as to enrich his already swollen coffers.
Finding, however, that his own men—known to and suspected by the police—can not be trusted with the carriage of these stocks, he recruits to his ranks a beautiful, but very needy, young maiden called Rani (Begum Para) and decking her up in male attire sends her to Badal pur.

In the other camp, Pedro is also on his way to the epidemic-ridden city, his heart bleeding for the unfortunate inhabitants. In the way, his midget companion-cum-aide-de-camp (Mukri) and he meet Rani now masquerading under the name of Padamsingh- and she promptly loses her heart to him. Rani's male attire leads to a number and variety of amusing misunderstandings and contretemps.

When Durjan comes to know that Rani has a predilection for his own greatest enemy, he tries his hardest to wean her away from her new love, but all his efforts come to nought and finally, in desperation, he incarcerates her in his castle and severely curtails her freedom of movement. While thus imprisoned, Rani discovers that in Durjan's possession is that half of the map of a treasure trove which its rightful owner, her father (Chamanpuri), has spent over 20 years of his life trying to locate—himself being in possession of the other half.

This discovery leads to a great number of stealthy moves and countermoves and to a lot of racing and chasing. Pedro and his companion, masquerading as Arabian sheikhs, succeed in gaining admission into Durjan's impregnable fortress and lending a hand to Rani in her efforts to track the map.
Does she? Who gets the treasure and who the girl? How does it all end? You'll be seeing it all in a moment. Please turn to the screen. Thank you. 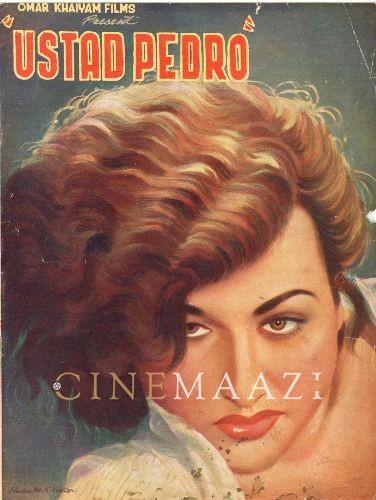